When Jeff and I opted for a short three month engagement, we faced a bit of a dilemma — we wanted a nice wedding and honeymoon, but we didn’t want to incur any serious debt. It’s not like we had been stashing a bunch of money into a wedding and honeymoon savings account during a long engagement, or even in anticipation of marriage while dating (we’d only started dating one year prior!).  And neither of us was willing to make the senseless mistake of racking up a bunch of debt.

So, once we started talking seriously about getting married, and shared that information with our families, mom instantly flipped into super resourceful mother-of-the-bride mode and started brainstorming ways for us to pull off a nice wedding and honeymoon on a limited budget.  Mom and dad wanted to give us a week in their timeshare, anywhere we wanted to stay, as a wedding gift.  Jeff and I chatted about it, and realized this would save us hotel costs, allow us too cook many of our own meals (something we love doing together), and still let us stay in a nice resort. 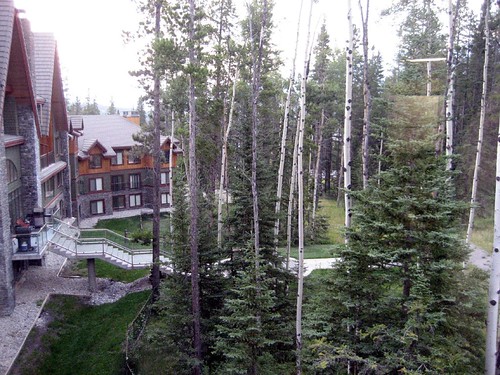 After we became officially engaged, Jeff and I hopped on my parents’ timeshare site and looked at resorts that still had availability for August.  No chance on Alaska or Yellowstone at that short notice; those locations book up a good year or more ahead of time.  We also limited our search to resorts located in places with pleasant weather in August.  That instantly eliminated New Orleans, New York City, and just about anywhere in New England. One spot that stood out was Banff National Park in Canada. Jeff had never visited Banff, or western Canada.  I’d spent time in both British Columbia and Alberta on family vacations, including a two-week Robledo family van roadtrip from California to Glacier National Park in Montana then to both Banff and Jasper National Parks in Canada around 1983.  Despite already being a bratty snobby pre-teen Orange County girl, I fell inlove with the Banff area during that trip.  To this day, that particular trip remains one of my happiest memories.  And oddly, I remember standing on the shores of Lake Louise thinking to myself how spectacular a place Banff would be for a honeymoon someday.

Since Jeff is a huge outdoors buff, a honeymoon in Banff was not a hard sell at all.  He was actually a bit surprised that I thought hiking and trekking through the Canadian Rockies would make for a romantic honeymoon.  Once we found out our combined American Express points pretty much covered the cost of full roundtrip airfare to Calgary, we booked the resort (Amex will combine points from two separate accounts for a honeymoon only — not for any other situation). 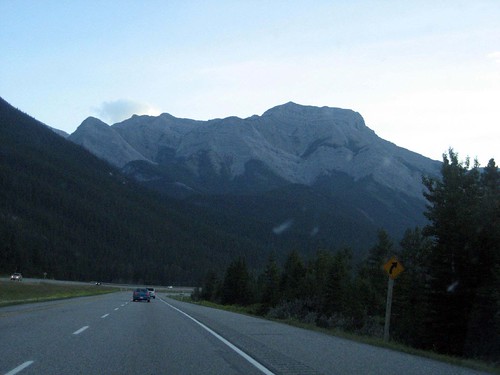 Driving along scenic Highway 1 from Calgary to Canmore.

Jeff and I planned our trip to Canada for the day after our wedding (we stayed in the Hilton LAX our wedding night).  After landing at Calgary International Airport (August 9, 2009), retrieving luggage, and clearing customs, we walked to the car rental annex to discover that every single rental agency had at least a two-hour wait for available cars.  We never received any type of real explanation for our confirmed reservation delay (Jeff checked every counter), but when we saw the unhappy crowds waiting around in the annex for a car, we opted to make our way over to an airport bar for our wait.

After getting a rental car two hours later, we drove 30 minutes north — not even remotely in the direction of the Banff area — to visit the new Bass Pro Shop that had just opened up in a Calgary suburb.  Jeff is obsessed with Bass Pro, and I must confess that I’ve grown quite fond of it myself.  While waiting for our departure flight at LAX, a returning Canadian resident mentioned the new store to us.  And when we cleared customs, the Canadian customs officer (and the Canadian resident in line behind us) both touted the new Bass Pro.  So, I realized there was no going back for Jeff…he absolutely had to visit his first international Bass Pro location so that he could rub that experience in his hometown buddies’ faces. 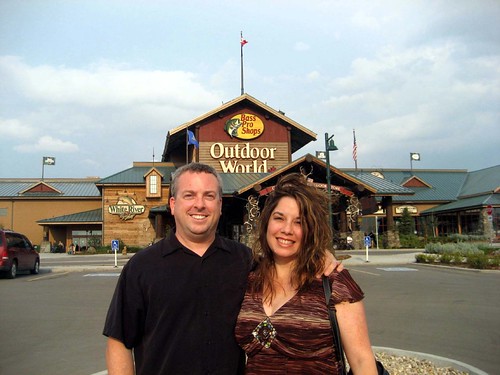 Jeff & I at Bass Pro Calgary, on a windy afternoon (note the hair).

Once Jeff had enough time to justify Bass Pro Calgary bragging rights, we headed out on Highway1 for an hour and a half scenic drive to our resort in Canmore.  The town of Canmore is a beautiful quaint spot about 10 minutes outside of Banff National Park.  It has all the majestic rugged mountain scenery of the entire Banff area, including the Bow River running right through town, but guests and residents avoid the crazy touristy Croc-wearing crowds one finds inside the town of Banff.

We spent time getting settled into our condo and exploring the resort grounds, then dove  right into planning our busy itinerary of activities for the rest of the week…what my sister-in-law called “bootcamp” instead of a honeymoon. 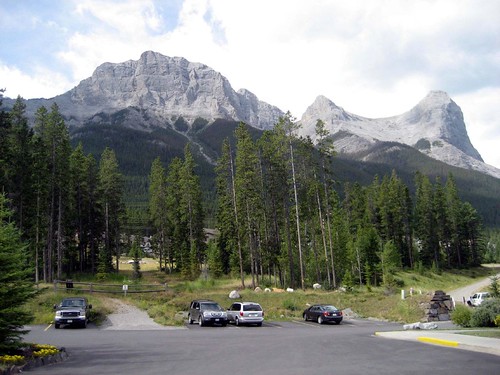 Rocky mountain view from the back of our resort. 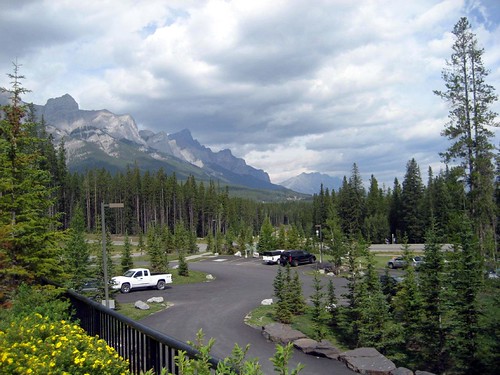 View from our resort looking west towards Banff National park.