On our first full day in Canada, we hiked about 16 Canadian kilometers, which I think equates to 45 miles American (I’m not too good at that metric conversion thing).  Having taken several weeks off of hiking before the wedding, and not really been properly outfitted for so much hiking that day, we decided we should give our feet the next day off (August 11, 2009) and go horseback riding instead.

It turned out to be a brilliant idea, because not only were we feeling the hike the next day in our legs and feet, but it was raining!  It rained off and on during the hour long ride down the Trans-Canadian Highway to Lake Louise, and put the mountains in a totally different light than we’d seen them the day before, giving us some interesting cloud scenes like this one: 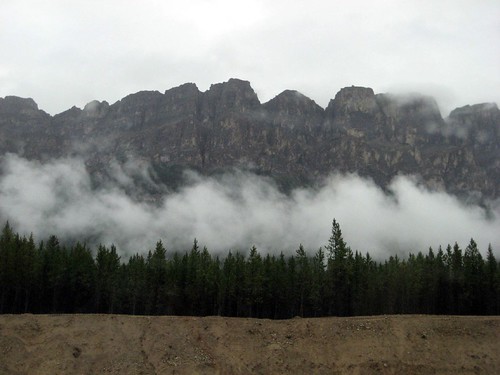 We successfully navigated our way to Lake Louise in the rain and found our horse guides, Timberline Tours with relative ease.  They’re a smaller, independent outfit, constantly at war with the Brewster Boys at the ranch next door, who seem to own the entire tourism industry in Alberta and are trying to run them out of town!  (Actually, I don’t know any of that to be true at all, and I couldn’t get our horseback tour guide to say anything bad about the Brewsters at all, despite my prodding, but I thought it made for a good western movie story line regardless)

But there were two things that we really did like about Timberline.  First, we got a private ride as soon as we pulled up, with just the two of us and the guide.  Second, they gave us these awesome western-style duster/raincoats to wear! 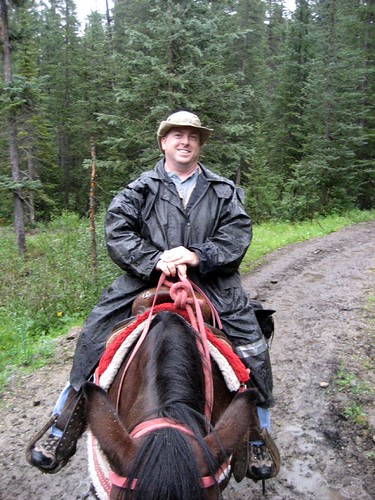 Me, looking awesome in my western-style rain gear on Molson the horse (gotta love a horse named after a Canadian Brewery!)

In our stylish rain gear, we were very well protected from the rain, and neither of us was at all uncomfortable during the ride, during which the rain alternated between drizzle and downpour.  In fact, both of us thought horseback riding in the rain made it feel like much more of an adventure than a ride in the sunshine would have been, and it was definitely better than walking in this: 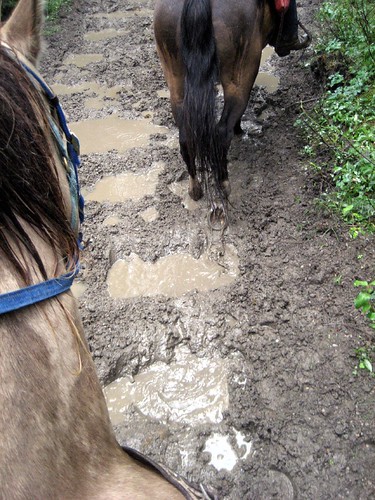 Canadian muck: Definitely better experienced from horseback than while hiking

After passing through the woods, we came up alongside the unimpressive backside of the very impressive Chateau at Lake Louise and then to our first rainy day views of Lake Louise itself: 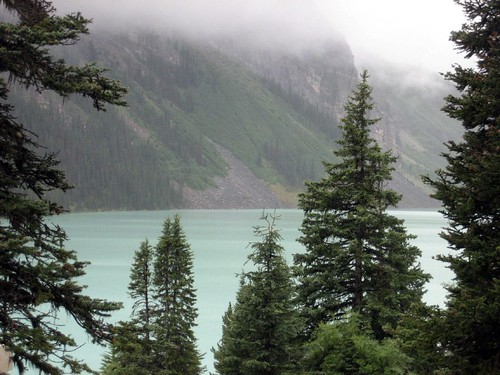 From here we had relatively frequent views of the lake, as we rode along the north side of the lake from the east end up to the glacier-fed streams that feed it on the west end: 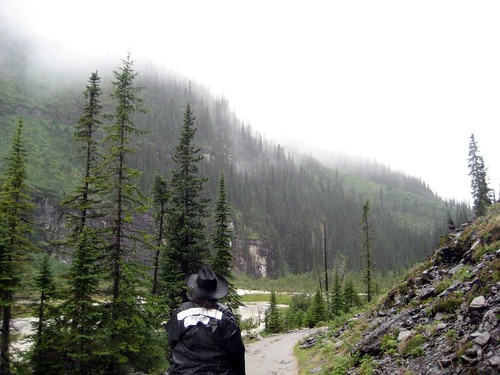 The headwaters of Lake Louise. On a clear day, you would see the glaciers looming over the lake, but on this cloudy day, we didn't even realize they were there!

The rain continued all the way back to the stables, but as you can see, our spirits remained undampened:

The total ride was close to two hours, and after dismounting from the horses and reluctantly giving back our raincoats, we headed down towards the Chateau and the lake itself.  The crowded parking lot and boardwalk around the lake was a zoo, but the rain had finally stopped and we got a much better view of the entire lake from the Chateau end. 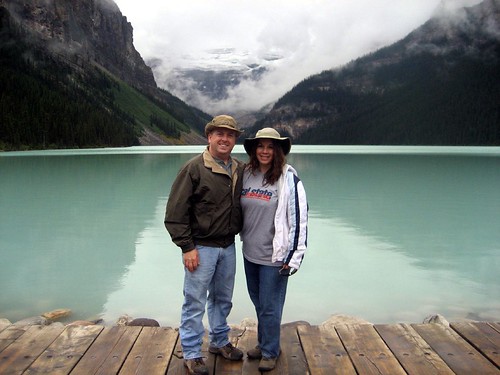 The awesome robin-egg-blue waters of Lake Louise. Notice you can now see the glaciers poking out in the background at the end of the lake near where we turned around on horseback.

We had hoped to canoe in the afternoon on Lake Louise, but as peaceful as the lake looked, and as ready to go as the canoes appeared to be, they apparently don’t allow anyone on the lake when there is a chance of rain. 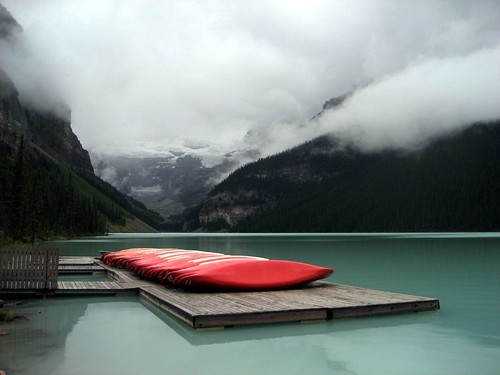 So we wandered around the lake to get away from the tourist bus crowd a bit and found a nice bench to have lunch on while admiring the lake.  Colleen wandered off with the camera to get some flower pictures while I organized our picnic.  Unfortunately, as she returned to the bench to sit down, she lost her grip on the  camera, and it bounced off the bench and landed on the sidewalk—never to work again.  We stared at each other for a moment in disbelief, as I had mortally wounded my camera just the week before, and it had been declared totally dead the first night of the honeymoon, and now hers was equally dead on the most important trip of our lives in the amazingly photogenic Canadian Rockies! 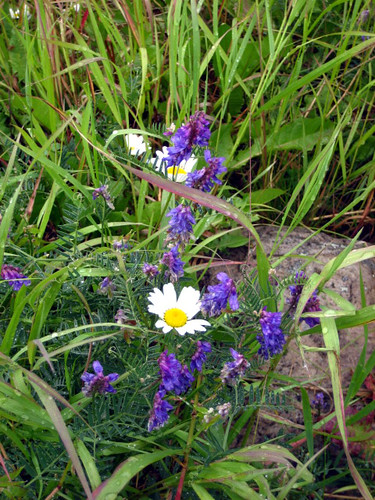 The last picture ever taken with Colleen's camera

While we had discussed “someday” upgrading our camera and getting something that took better outdoor pictures, it was definitely not on our immediate to-do list, and was intended to follow things like a gps, mountain bikes, etc.  But with the demise of our only camera on the third day of our honeymoon, we didn’t have much of a choice.  Of course, being stuck in one of the touristy places in North America left us fearing that we would get totally ripped off on the purchase, but what choice did we have?  We looked in the Chateau’s gift shop, without success, and were similarly out of luck at the sporting goods store in Lake Louise.  At both places we were told that there was a camera shop in Banff, but we were really hoping to avoid that.  We figured people who live in these areas must have some place to shop that caters to locals and offers non-tourist trap prices, so we called our resort and asked at the front desk where they would recommend.  Turns out that there was a place called “The Source”, which is apparently an affiliate of Circuit City right there in Canmore.  I immediately felt better, figuring a national (international even!) chain would have consistently fair prices, and I was right.  After sorting through a decent selection of reasonably priced cameras, we settled on the Canon Power Shot SX 110.  My favorite features were that it had a 10x zoom, compared to Colleen’s 3x, and a nice macro feature, both of which would prove useful on the remainder of the trip. 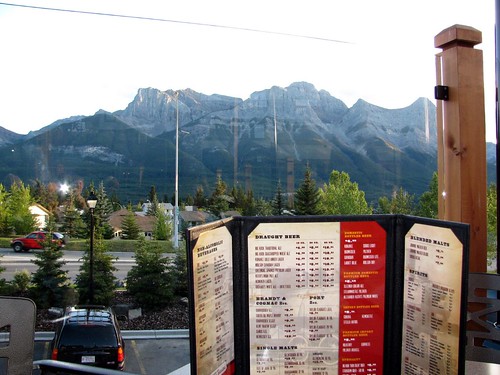 First picture with the new camera! From the glassed-in patio of the Iron Goat Pub and Grill, in Canmore.

Feeling better about having made lemonade from our lemon with the new camera, we had a nice dinner in Canmore at the Iron Goat Pub and Grill and then made use once again of the long Canadian days by taking a 10pm sunset stroll along the Bow River right at the edge of town before turning in for the night. 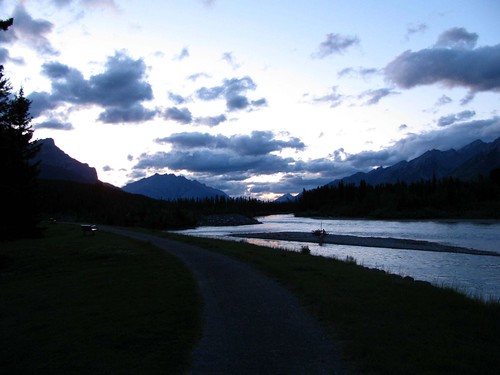 Bow River in Canmore at sunset