When we first got into Canmore Sunday night, we checked the weather forecast for the week.  We knew it was supposed to rain off and on pretty much the whole time we were going to be there, but figured we could survive a little bit of rain for our hikes and horseback riding as long as we were dressed for it.  The one day we felt we needed good weather for was our trip up the Icefields Parkway.  Regularly listed as one of the most scenic drives in the world, we wanted to be sure that the mountains and glaciers were clear enough to see, and not shrouded in clouds and mist. 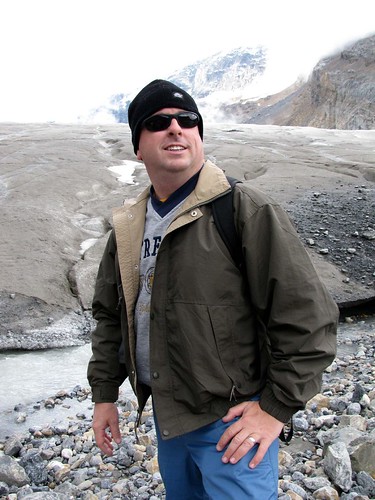 Me, looking awesome, as we prepare to head up the glacier.

Wednesday, August 12, 2009, appeared to be the best chance of a sunny day, but even it was listed as a 30% chance of rain.  But we just crossed our fingers that it would be the 30% of the day we didn’t need good visibility and reserved a spot on the Athabasca Glacier Hike, in the Columbia Icefields for 10:30am on Wednesday.  Since it was estimated to be a 2 ½ hour drive from Canmore, we decided we needed to be on the road by 7:30am, which officially counts as “early” for us—especially on our honeymoon! 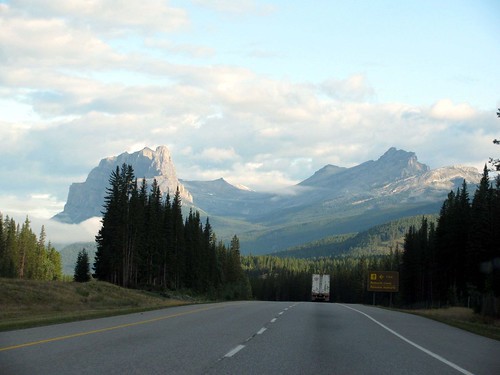 At first light, it looked like we’d made the right choice.  There was a good deal of blue sky to be seen and the streets looked dry.  We breezed down the highway, cockily moving into the annual pass express lanes at the National Park checkpoint, breezing past… absolutely nobody in the regular lanes, for the second day in a row.  Nice.

We hit the Lake Louise turnoff in about 45 minutes, but this time we kept going.  Not long after we passed the village, we officially entered the “Icefields Parkway”

Almost immediately, we started climbing and entered a wet, misty fog that at times limited visibility to maybe a quarter mile or so (or 14.3 Canadian kilometers, I think…). 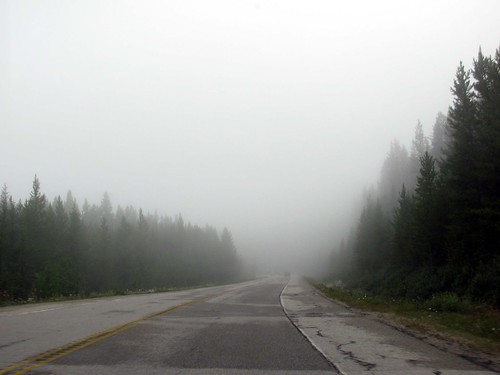 We were starting to worry that we were going to have our highway views obliterated by the clouds and rain, but when we got out of the first pass and back down to the Bow River Valley, things cleared up significantly.  Many of the peaks were still shrouded in clouds, but we were beginning to settle down and enjoy the views when….. AHHHHHH!!!! BEAR!!!!!!!!!! 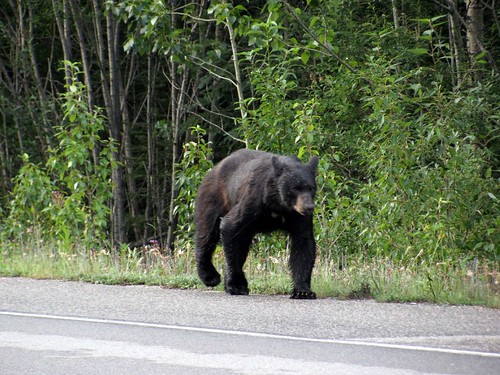 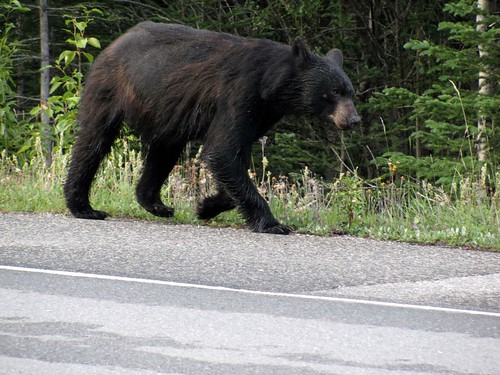 Walking right along the Icefields Parkway was a black bear!  We pulled over immediately as we passed him, and he walked right up the shoulder opposite us, munching on berries as he ambled along.  I rolled down the window to take pictures as he passed no more than 20 feet (about 2 meters Canadian) away from us.  Colleen started to jump out of the car to get a better view and pictures with her cell phone, until I reminded her that it was an actual live bear with real teeth and claws, and that staying in the car was probably a good idea.  Unfortunately, by the time it occurred to me to switch the camera from photo mode to video mode, it was already past us and nosing into the brush, so we really just got a stellar shot of his rear end.

As we moved on, the scenery really did become the star.  Beautiful mountain vistas and recurring glimpses of the unworldly blue river and lakes of the same color were with us all the rest of the way, but we largely restrained ourselves from stopping, since we were concerned about missing our tour and figured we could get pictures on the way home.  But we did stop for this one, which is one of my favorites from the entire trip.  We’re loving the new camera by now! 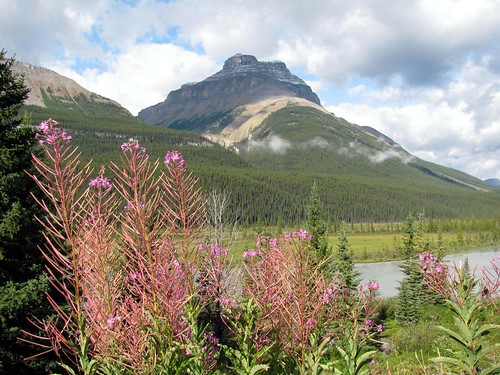 We got to the Columbia Icefields and Athabasca Glacier early enough to stop in the Icefields Center (or Centre, as the Canucks spell it) and hit the restrooms and gift shop before heading across the street to the base of the Athabasca Glacier to meet our tour group.  The Center was tour bus central, and Colleen was very nearly trampled by an entire busload of tourists whose bladders were apparently ready to burst to the point that they literally sprinted through the building trying to reach the restrooms.

While Colleen had climbed the glacier with her family back in the 80’s, the receding glacier and the river of glacial melt undercutting it’s base have made it unsafe to climb alone, as demonstrated by this warning sign: 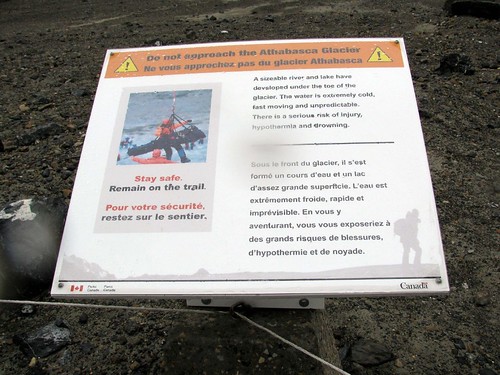 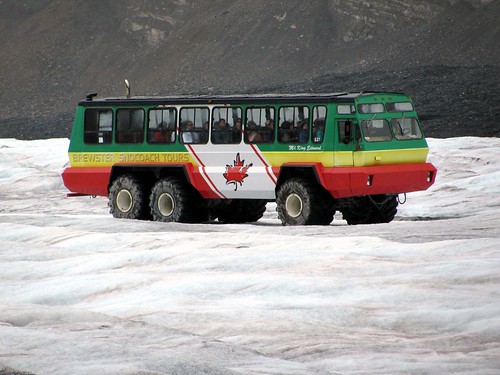 Today, you basically have two options to get on the glacier:  The giant all-terrain buses run by the tour companies (including the evil Brewster Boys,  mentioned in Day 3), or the far lesser known, far less touristy guided hikes by IceWalks.  In our continuing efforts to avoid the Croc-wearers, we chose the guided hike.  The website lists it as a 3-4 hour hike, going up the first 2 kilometers (about 18 miles, I think) of the glacier.  We had hats and jackets, but they provided us with snow/rain pants, gloves, and crampons from their trailer in the parking lot, all of which proved critical by the time we were done! 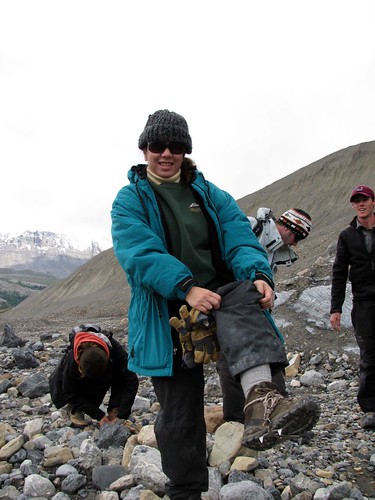 Our group was made up of Americans, Brits, French, and one Canadian girl, traveling by herself (who was immediately swooped upon by the one American guy traveling alone), and we were led by a guide from New Zealand!  He was quite knowledgeable, and did a really good job explaining things and keeping us safe as we headed up the glacier.  He also went out of his way to find crevasses and sinkholes, and give us up-close-and-personal looks down into them.  Most importantly, his Kiwi accent amused us greatly, and reminded us of that Bear Grylls guy… 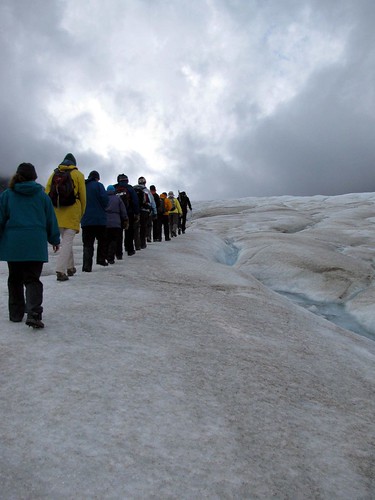 We were required to walk single file in the guide's footprints at all times for safety's sake. 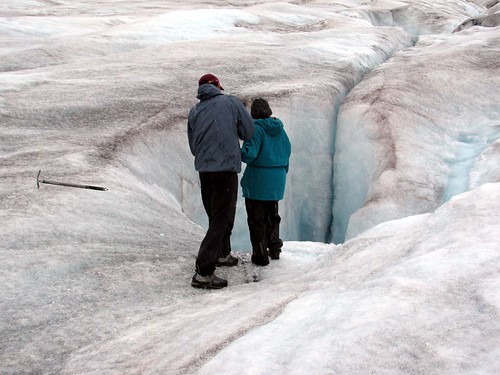 Kiwi guide keeping Colleen from falling into the crevasse. 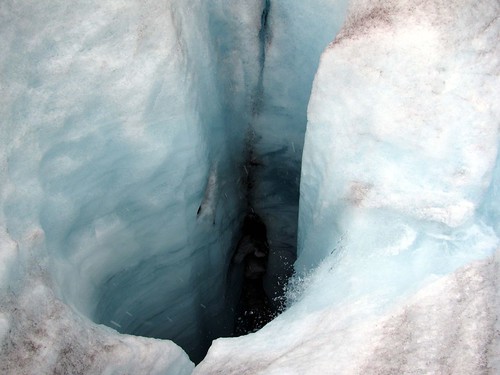 This is what Colleen is looking down into in the previous picture. The hole goes down indefinitely. 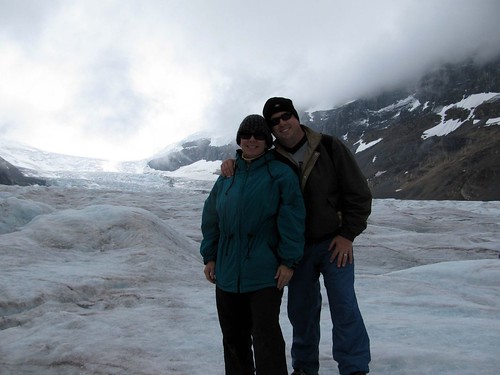 As we approached the top of the glacier, it started to snow.  Or rain.  Or hail.  Or some combination of the three our guide called graupel .  The little balls of snow and ice mostly just bounced right off us, but we began to pick up our pace as we headed back down the slope.  It alternated between falling on us and being clear at first, but as we got closer to the bottom, it really started to come down harder, and then about 2/3 of the way down, the graupel turned to rain, and the wind picked up, and it really started to get miserable.  By the bottom of the glacier, we were nearly on a sprint to the parking lot, stopping only long enough to get this picture of a marker showing where the glacier’s tongue was when Colleen and her family had visited 25 years ago (that’s 10 years Celsius)—a couple hundred yards from where it is today. 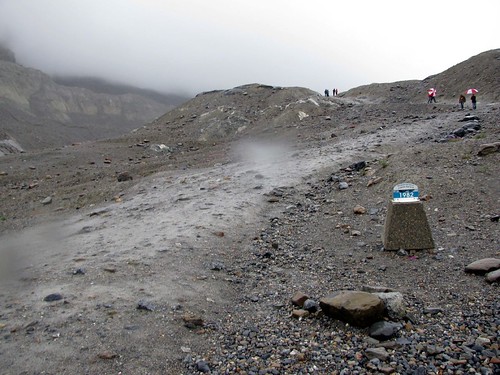 <political rant on> You might think this glacial melting proves that global warming is real, but that theory wouldn’t explain why the high mark for the glacier was all the way at the Icefields Centre across the highway in the mid-1800s, well before gas burning cars existed and even before civilization had really reached much of Western Canada.  So yes, global warming is real, but man-made?  Maybe not so much. <political rant off>

Once we hit the parking lot, we hastily stripped off our rain pants and gloves, getting soaked to the bone in the process.  We considered going back to the Icefields Centre to warm up, use the facilities, and look for some specific items at the gift shop, but the rain had chased all the crowds into the center, and there were easily a dozen tour buses in the parking lot, so we decided to take our chances and look for restroom on down the road.  It poured rain as we headed back down the highway looking for someplace to stop.  We found it at the Crossing Resort, located at the Saskatchewan River crossing, where there was a hotel, gift shop, cafe, and a pub!  We chose the pub, of course, selecting warm coffee drinks (Irish Coffee for me, B-52 for her) to chase off the chill.  Now warm and relaxed, we were ready for the rest of the drive, and we were rewarded by beautiful weather the rest of the way, blessing us with some awesome scenery for the remainder of the drive home. 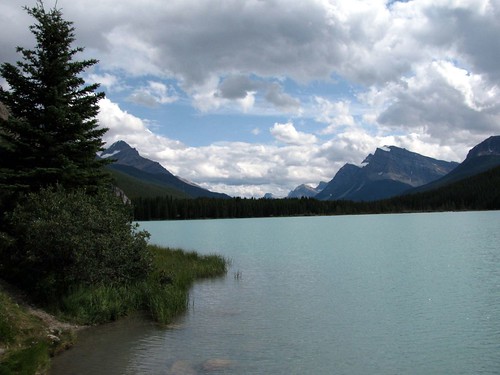 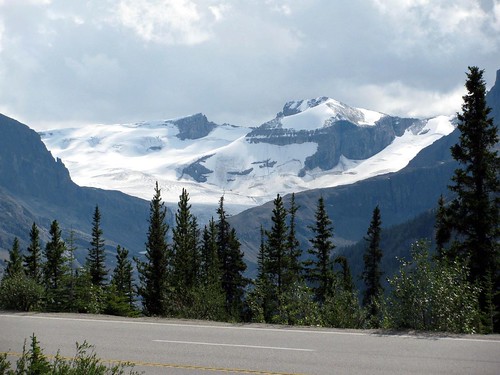 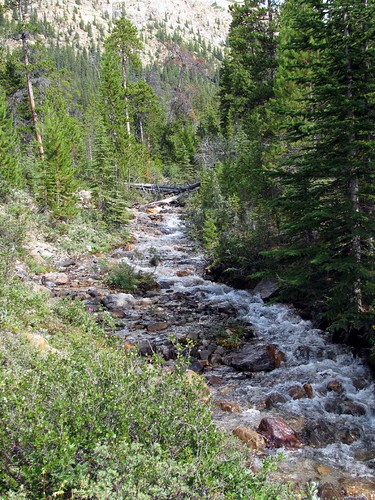 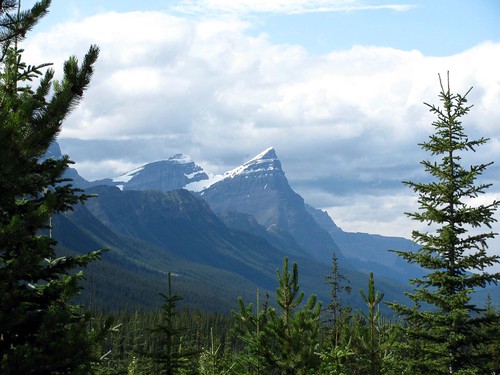 We stopped and took a brief but steep hike up to the Peyto Lake overlook, which was another of those views we’d seen on posters at all the gift shops, but apparently so had everyone else, as the walk and lookout areas were quite crowded, but worth the picture anyways. 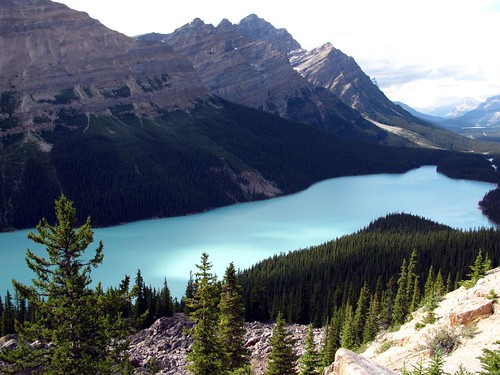 That evening, we got back to town just in time for dinner at Stoney’s Grill on the Silvertip Golf Resort in Canmore.  We’d done some research back in our rooms the night before, and after we saw that their menu included Alberta beef dip sandwishes, sweet potato fries, and a Jack Daniels chocolate tart, with a view of the mountains and the golf course, we were sold!  It was all quite good and a great way to end a great day. 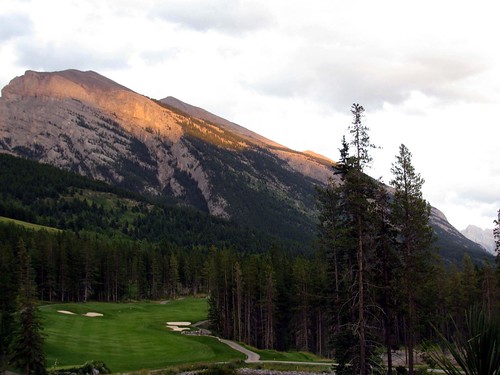