Having narrowly escaped death in our black bear encounter in Day 4, we decided to push our luck in Day 5 (August 13, 2009) by going out and looking for opportunities to challenge the dreaded grizzly bears in a head-to-head grudge match.

We're not afraid of you, Mr. Grizzly Bear. Show yourself!

We had a two part plan.  First, we were heading to the Lake Louise Gondola,  which several other tourists and our guidebook (Lonely Planet Guide to Banff, Jasper and Glacier National Parks) had said was the local lift (there are several in the area) from which we were most likely to see grizzlies and other wildlife.  Then we were going to head to Lake Moraine, for a hike so filled with dangerous grizzlies, Canadian law requires people to travel in groups for safety!

We started with one of our great morning breakfasts at the time share.  One of the advantages of staying at the time share is we had a complete kitchen, so after hitting the grocery store on the way into town the first night, we were able to save quite a bit of money by cooking our own breakfasts, making many of our own lunches, and mix our own cocktails at night.  So each morning started with scrambled eggs and andouille, or ham, egg, and cheese sandwiches on english muffins, or pancakes, eggs and sausage.  And coffee, of course!

It was predicted to rain off and on all day long, and since we figured that good visibility was more important on the lift ride than the hike and both activities were in the same area, we figured we would play which to do first by ear.  Or eye, actually.  If it was clear when we reached the Lake Louise exit, we would do the lift in the morning.  If it was raining, we would hike first and hope it cleared before we went back to the ski resort.

We had decided to once again skip the busy Hwy 1 and take the more scenic Bow Valley Parkway to Lake Louise.  We once again saw our family of elk along the road and as now-jaded regulars, laughed at the tourists stopped on the side of the road taking pictures of them and sped on by them when OMG A BIGHORN SHEEP!!!!!!!!! 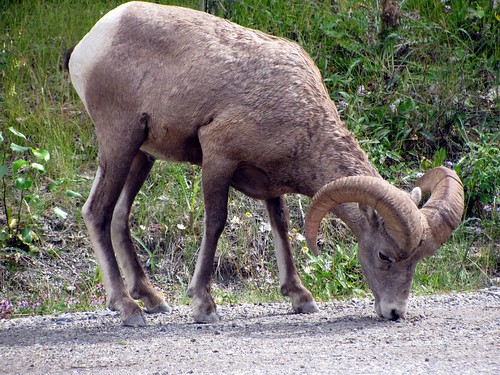 No tourists were harmed in the photographing of this bighorn sheep.

The rest of the trip up the Parkway was uneventful, and it literally dumped us right at the Lake Louise Ski Resort, where the lift was located.  And as luck would have it, the skies were clear!  We headed into the beautiful log cabin style lodge, and purchased our tickets.  At around $25 each, they weren’t cheap, but we figured it was a bargain for the opportunity to wrestle with a grizzly.

We were warned at the ticket booth that there was an active grizzly at the top of the mountain and that while the observation deck was open, the visitor’s center was not.  We, of course, took this as a good sign of great things to come, and after watching a mandatory grizzly orientation film (more about conservation, less about gutting and grilling than I had hoped), we were headed up the mountain. 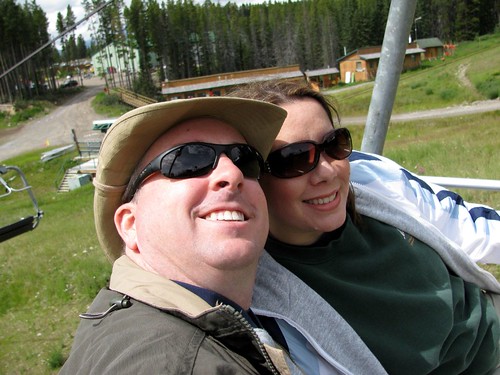 One of the first things we noticed, was the Jurassic Park-like electrified perimeter fence designed to keep the tourists out of the grizzly zone and the grizzlies out of the tourist-zone. Nice… 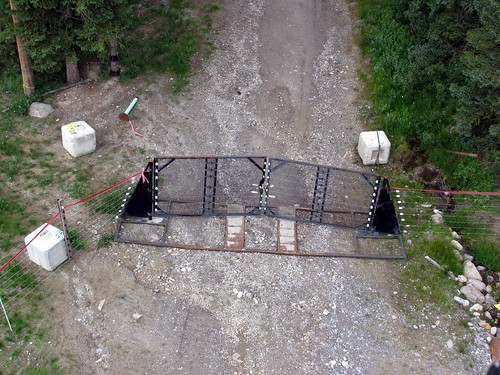 Electrified perimeter fencing, designed to protects us from grizzlies, T Rex, and other carnivores.

While we kept a careful eye out for grizzlies on the way up, most of the ride was spent marveling at the great scenery and views, as we could see all the way out to Lake Louise and the glaciers we were going to hike on Day 6 from the ski lift. 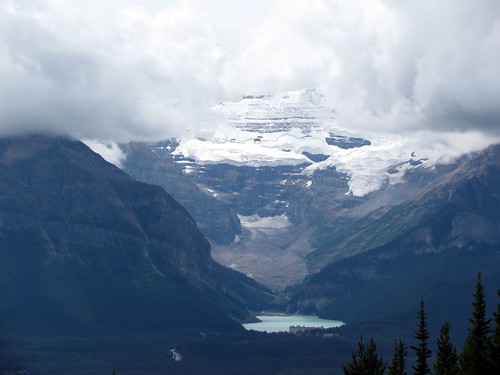 We got to the top without incident, and walked down the the observation deck, where once again the views were great, but they kept us from walking down to the visitor’s center because the grizzlies were still there! Apparently a dozen or so lucky tourists who had gotten up there earlier were trapped there at the visitor’s center waiting for the authorities to declare the area clear enough for them to go back to the lift.

So we sat there at the top of the mountain and had our pre-packed lunch, and waited in vain for 1) Them to let us down to the visitor’s center, or 2) the grizzly to charge us on the observation deck.

Alas, while they finally let the visitor’s center refugees escape under heavy escort back to the lift, we finally had to leave without seeing our quarry. So we headed back down the mountain, grizzly-less, but enjoying the peace and serenity of the clean air and the mountain views–and our Blackberries. 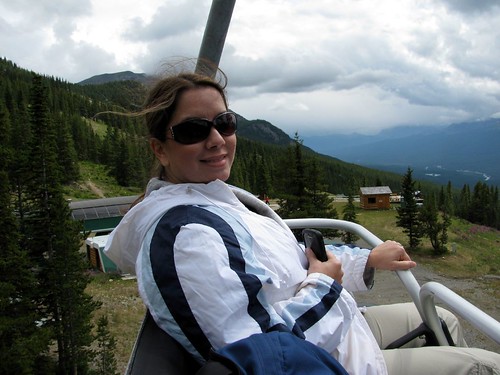 Once back to the base, we headed off to the next sure thing, the extremely dangerous, grizzly-infested Consolation Lakes hike, starting at Moraine Lake. We had really looked forward to seeing Lake Moraine as well, as it is described as one of the most scenic views in Canada, and had at one point been portrayed on the Canadian $20 bill.

How dangerous was the hike? This dangerous: 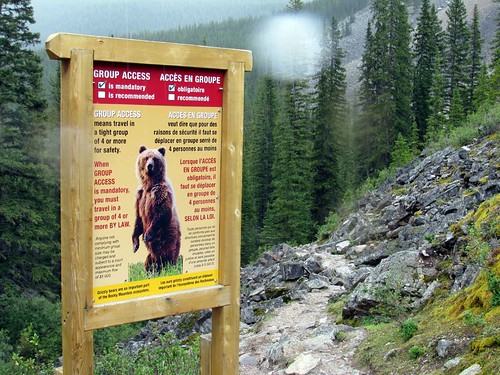 Yes, that is in fact the Canadian Government threatening us with a $5,000 fine if we don’t do our —errrr, hike, in a group of four or more.   In fact, not only do you have to be in a group of 4 or more, but you must remain within 3 meters of each other at all times!  The fine for hiking otherwise was $5,000, which was not in our post-wedding, honeymoon budget, so we waited patiently at the grizzly warning sign for some other hikers (or as we liked to think of them–“bear bait”) to join us.

Fortunately, we only stood in the rain a short while before a pair of Americans from the Sacramento area came along.  They both had much better brand-name gear than we did, but they were also older and retired, so we figured we could keep up, and we joined up and headed on down the trail.  This turned out to be a good pairing, as they were retired teachers and very nice people who didn’t make us work too hard trying to stay with them on the trail.  Plus, we figured if a grizzly really did show up, we could probably outrun them.  Like the old story goes, I don’t have to be faster than the bear–just faster than you! 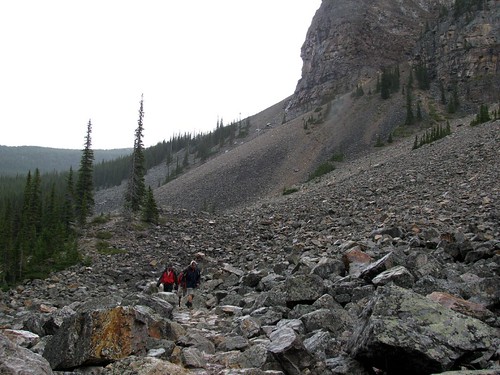 The first part of the trail crosses this very cool, large moraine area, and the path is very difficult to see. 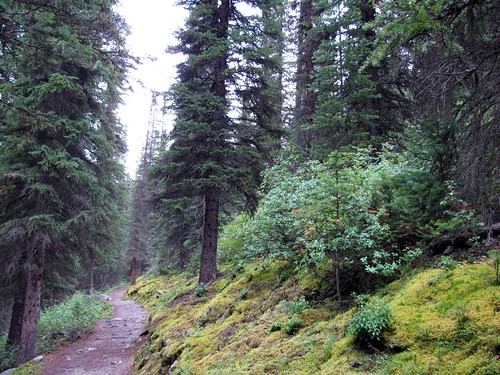 Most of the rest of the path looked something like this, but it was too wet to stop and take many pictures along the way.

The forest path was beautiful, much of it following a whitewater stream, and the trees offered some protection from the rain, but the beginning of Lower Consolation Lake was more exposed, and the rain just kept coming. 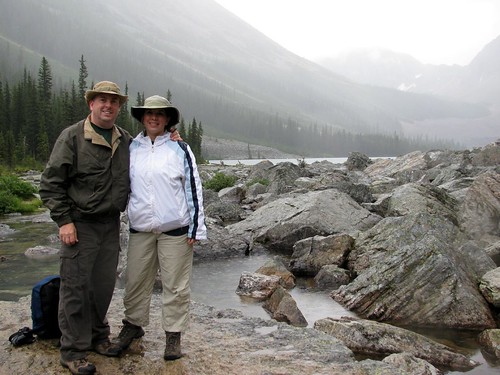 Posing in the rain at Lower Consolation Lake.

At this point, we were soaking wet, so we decided not to cross the rocky path across the moraine on up to the Upper Consolation Lake, and started to head back.   Sadly, the closest thing we’d seen to a bear so far was this bear shaped mini-glacier on the side of the mountain here: 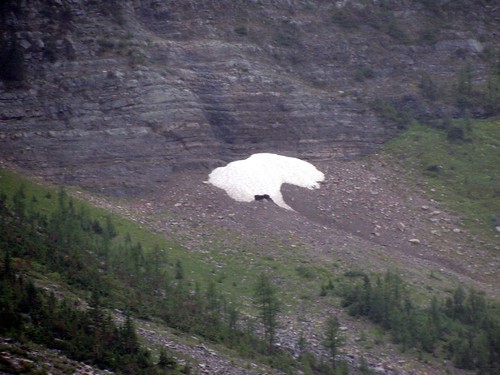 The only bear we saw on the trail may not technically have been a real bear, but doesn't the shape of the snow look like one?

On the way out, it had been raining too hard to take one of the side paths down to the river’s edge to get a shot of the various falls (or hardly any other pictures), and we’d hoped it would let up on the way back, but no such luck. Not wanting to try the patience of our soaking wet hiking partners, on the way back I asked everyone to hold on briefly and half-sprinted, half-slid down a muddy side path to quickly snap this representative shot of the falls we were hiking along: 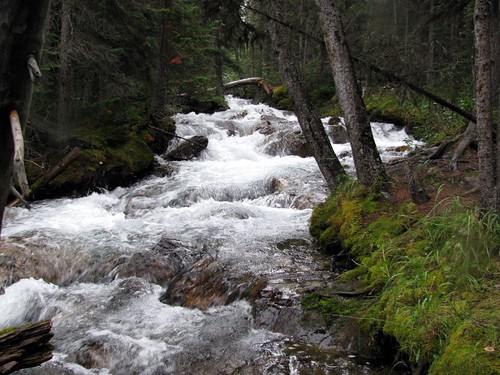 I risked my life and the anger of my wet fellow hikers to get this shot. Might have even been worth it!

From there, it was all business, as we slogged down the muddy trail as directly as possible, stopping for nothing. At the trailhead where the original sign was, instead of heading right back to the lodge and parking lot, we turned left, to head up to the famous Lake Moraine lookout to snap a few pictures:

Isn't it beautiful? Unfortunately, this isn't our picture, but it is what it is supposed to look like.

Okay, so that wasn’t really our picture.  This is how it actually looked on our visit.  Notice the water drops on the camera lens and the drowned rat look we are both sporting: 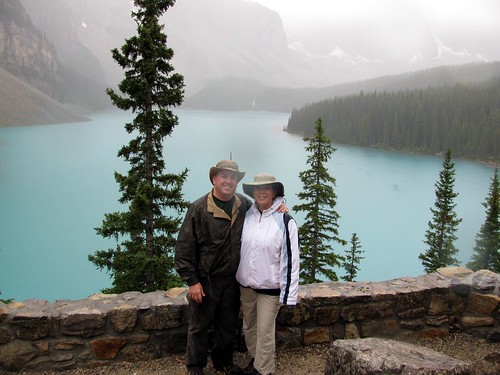 Looks almost like the postcard picture above, doesn't it? Other than the raindrops on the camera lens and the drenched honeymooners in the foreground...

By now we were totally soaked to the skin, and our jackets and hats were acting like heat conductors, drawing all warmth away from our bodies. We headed back to the car, and after a brief stop in the gift shop and lodge, headed back towards the condo.

Once again, we took the Bow Valley Parkway, and once again we ran into the same attention-whore family of elk. I tried to drive around them and the stopped tourists again, when they decided to cross the road right in front of us. I let the first one go, and thought all was clear, but just as I started to go again, one attacked! Well, not quite attacked, but he and I did exchange words, as seen in this exciting video footage:

Having avoided injury from elk and bighorn sheep, and somehow missed the grizzlies entirely, we headed back to Canmore, stopping only to pick up some Pho from the only Vietnamese place in town on the way home. It didn’t quite meet our high standards from Saigon Noodle House in Placentia, but it did warm our nearly hypothermic bodies back up, which was our goal.

Tomorrow, we pledged, we would not come home from our hike cold and wet.  Tomorrow would start with a rain gear shopping trip!