You are here: Home / Hike Reviews / Hikes By Distance / 5.1 to 7 Miles / Canadian Rockies: Hiking to the remote alpine Plain of Six Glaciers for afternoon tea

One of the coolest most unique hikes in the Canadian Rockies is the 8-mile round-trip there-and-back trek in Banff National Park from majestic Lake Louise up to the Plain of Six Glaciers. Jeff and I did this hike on the sixth day of our honeymoon — August 14, 2009.   The hike provides stunning views of Lake Louise.  The terminus is a high moraine overlooking the convergence point of six different glaciers — Aberdeen, Upper Lefroy, Lower Lefroy, Upper Victoria, Lower Victoria, and Popes — that feed the pristine waters of Lake Louise.  And a quaint alpine tea house up near the terminus provides well-welcomed rest and nourishment with a breathtaking view.

The starting point for the hike is the walking path along the east side of Lake Louise, which can be accessed right behind the chateau.  This first stretch is well paved and quite crowded, but once you hit the dirt path near the end of the lake, and then the headwaters (nicknamed the “tourist turnaround”), the hike becomes much more pleasant.  The trail hugs the base of a rocky mountain face before starting a gradual climb up into lush green forest.

A bit later, the  now rocky and muddy trail leads you through a peaceful mountain meadow, which continues to climb up to a narrow rocky stretch of trail situated on a rocky ledge that gets so wet and slippery from rain that metal cables are embedded into the mountain for hikers to use as handrails.  After a series of switchbacks that climb a dirt trail, hikers can either take a short path on the right to the tea house, or proceed up a steep rocky narrow moraine to finish the climb to the terminus marked by the six glaciers.  At trail’s end, the trail is flanked by a steep glacial valley below on one side, and what looks like a former landslide on the right.  If you’re lucky, the weather will be clear enough to catch a glimpse of Abbot Pass Hut — the second highest permanent structure in Canada — up on top of Victoria glacier

After a short walk down from the terminus, Jeff and I took the detour to the historic tea house.  The tea house is situated in a wood and rock alpine style hut that was built  in 1927 by the Canadian Pacific Railway.  Now privately owned, the tea house is only open during summer months and all supplies have to be hiked up, packed up on horseback or airlifted in.  The tea house (which takes cash only) serves tea, scones, chocolate cake and a few other goodies…all made without the benefit of electricity, and set among the most peaceful setting imaginable.

After enjoying our lunch, and waiting out a sudden heavy rain storm, Jeff and I retraced our route back down to Lake Louise.

This hike is best done during summer months, when the tea house is open, and is suitable for children who are used to hiking moderate distances.  But, be sure to pack rain gear and take footwear with good traction because it rains frequently, which can make portions of the trail very slick and muddy.  Despite being labeled in most hiking publications as an “easy” hike that can be done in a few hours, it can take up to 6 or 7 hours. 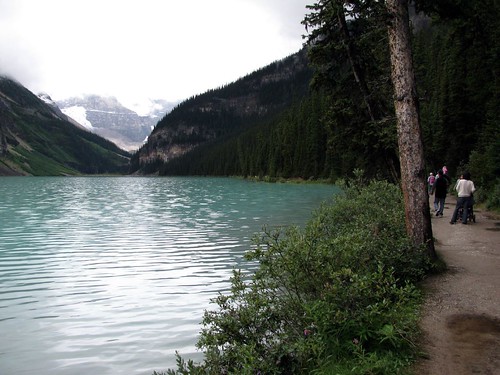 The starting point for our 8 mile rountrip hike to the Plain of Six Glaciers begins with the crowded touristy footpath alongside Lake Louise. 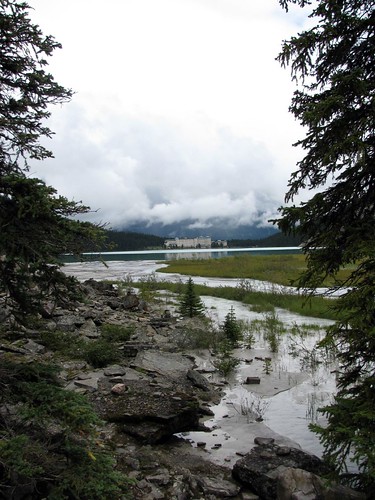 At the lake headwaters (aka "tourist turnaround"), climbing the trail to the Plain of Six Glaciers. 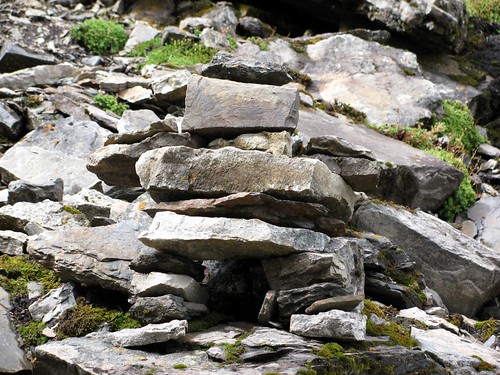 We spotted what we initially thought was a creatively assembled cairn (in the shape of a man) guiding us off the lake trail. We later learned this is called an Inukshuk, a man-shaped figurine made by Canada's Inuit people. 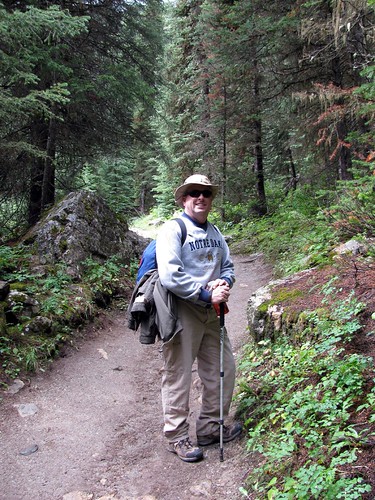 Entering lush forest after leaving the Lake Louise headwaters. (My fabulous hubby always packs in all our gear! Even our jackets here, since the weather started out so nice.) 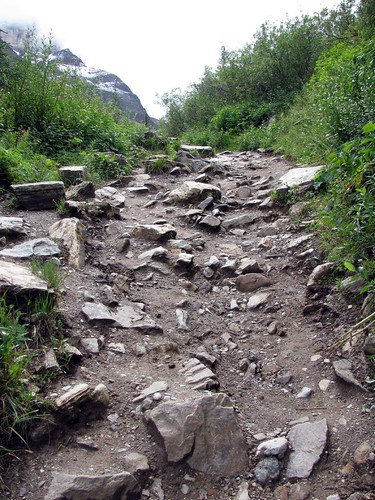 The meadow leg of our trail soon gets dotted with embedded rock. This is why the guidebooks recommend hiking boots, for the ankle support and traction. 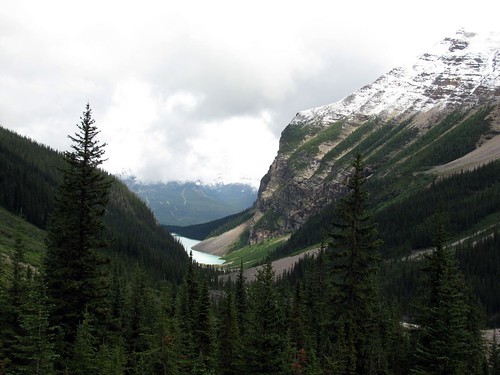 A glance back at how far we've climbed up above Lake Louise. God's country! 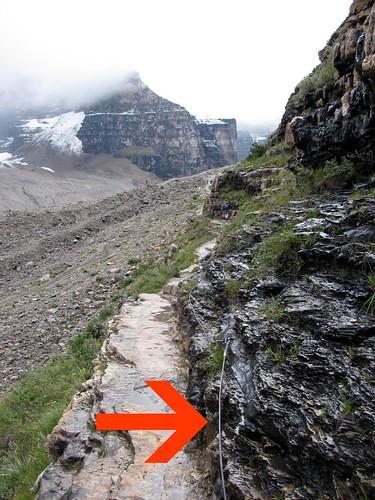 This photo deceptively makes it appear as if the narrow rocky path is at just about the same level as the glacial plain below. It's actually quite a distance up. And the arrow is pointing at metal cables embedded into the side of the mountain for hikers to hold on to when the trail gets wet and slippery. 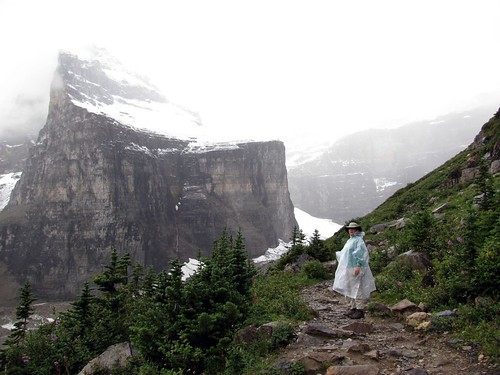 Isn't this how every bride wants to be pictured on her honeymoon?...wet and cold in a rain poncho? We've actually passed the alpine tea house by this time, opting to hike the extra mile up to the glaciers first, hoping to make it before the downpour, and not hike the rest of the way up to the plain on a full stomach. 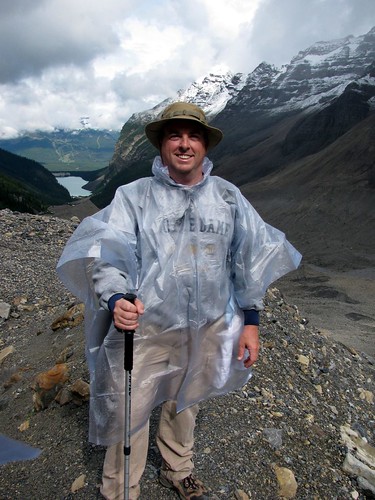 My dashing groom in his rain gear! Up on the moraine that marks the highest point of our hike. Lake Louise is below. 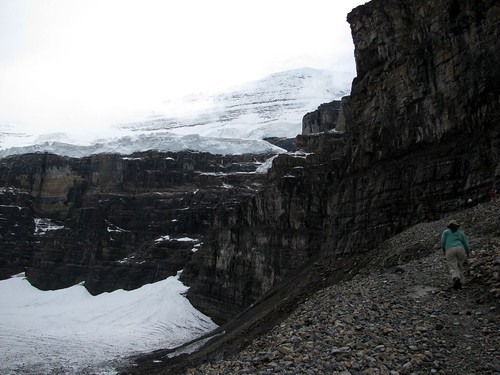 It stopped raining long enough to get rid of the ponchos for the last stretch of the hike to the end of the glacial moraine. That's Victoria Glacier up above us. Gorgeous! This spot marks the convergence of six glaciers: the six glaciers--Aberdeen, Upper Lefroy, Lower Lefroy, Upper Victoria, Lower Victoria, and Popes. 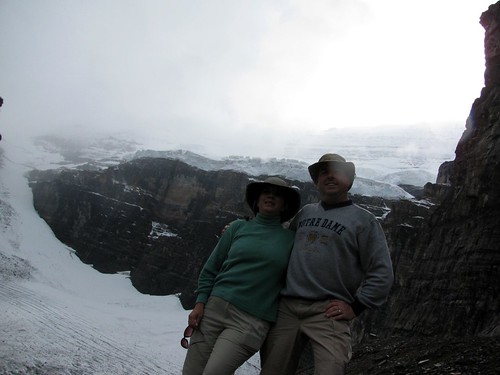 A fellow hiker snapped this shot of Jeff and I at the trail's end of the Plain of Six Glaciers. So majestic up there! 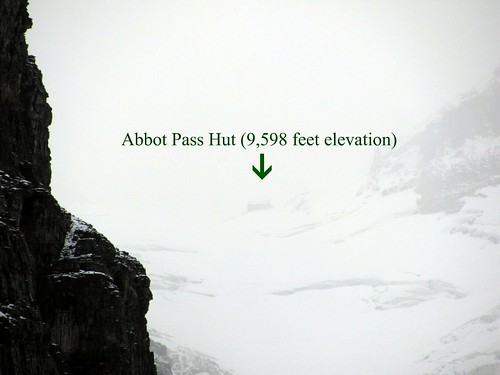 For just a few minutes, weather cleared enough for us to get a quick glimpse at Abbot Pass Hut, an alpine hut located at 9,598 feet elevation, built in 1922 by the Canadian Pacific Railroad. 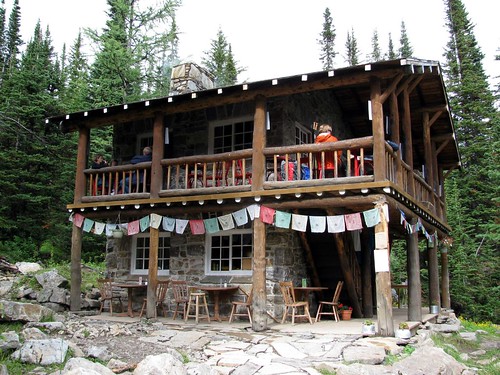 The famous remote rustic alpine tea house located near the Plain of Six Glaciers. Built in 1927 by the Canadian Pacific Railway, it is now privately owned. 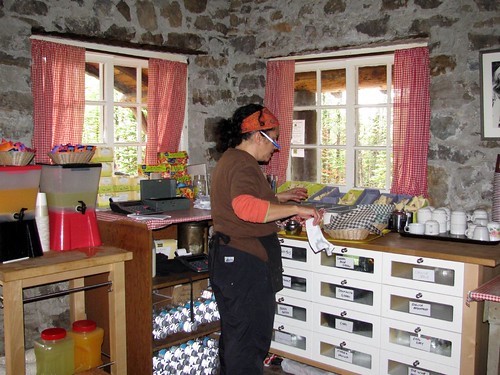 Our cook/waitress was flying solo today, and working her butt off. The place was packed. Note the bottled water piled up behind her... no running water. 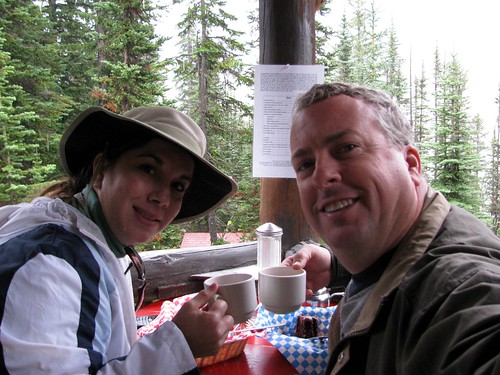 Enjoying hot tea and baked goodies during a brief rain and snowstorm...all prepared without electricity. A really cool experience! 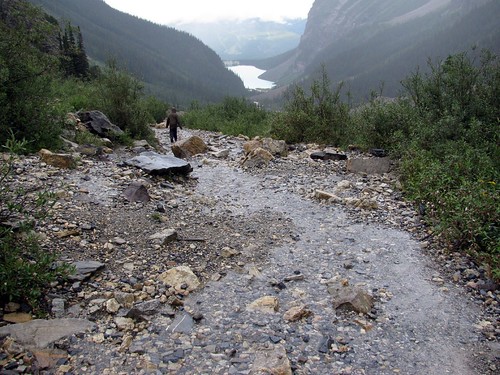 Our trail back is now covered in water due to the downpour of rain and snow. 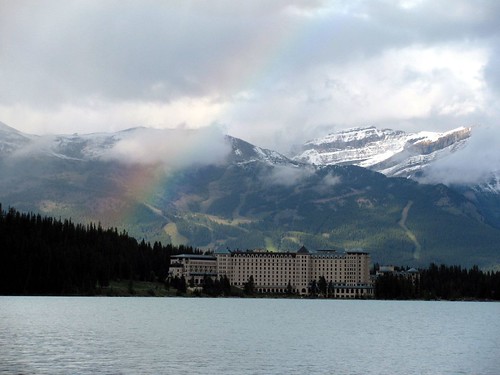 As we descended the glacial plateau, we were greeted by a beautiful rainbow on the final leg of our roundtrip hike, the touristy footpath alongside Lake Louise. 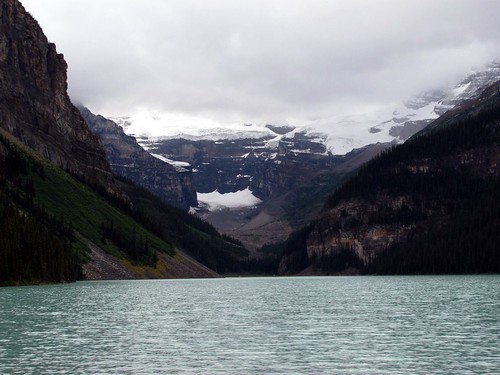 Our final look at Lake Louise for the honeymoon. That big white patch of "snow" in the middle of the photo is the glacial plain we hiked up to today.

Check out reviews from other hikers