This past Saturday we were looking for a hike that would allow us to get out and back in time to hit the grocery store and cook dinner for some friends who were coming over, and not kill us in the process. We jumped on to our go-to guide, Trails.com (paid subscription), and found only a few hikes in the 5 mile and less than 1000 ft elevation gain (that’s how we define relatively easy) range within easy driving distance. Several of these were in the Whittier/La Habra Hills area, and we settled on one within Hellman Wilderness Park.  When we researched the trail further, we realized that the Trails.com guide for this park was severely outdated, and none of the current trail names on the Hellman Wilderness Park website map were reflected in it.

From our home in Northeast Orange County, it was a bit of a pain to get to the park, as there is no easy freeway access to it from here, and it was about 45 minutes worth of surface streets to get there.  If you’re coming from LA or other parts of OC, it is a pretty easy shot from the 605 down Whittier Blvd to Greenleaf Ave.  On the way home, we took Turnbull Canyon Road north and hit the 60, but while it was a nicer ride, it wasn’t much quicker. 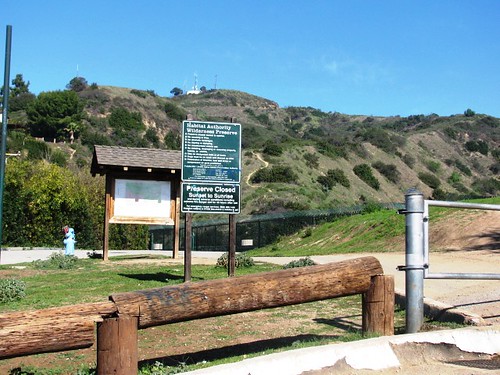 There is a small parking lot at the park entrance on Greenleaf Avenue, but more parking is available on the street if it is full.  The trailhead is clearly marked at the end of the parking lot, and there is a kiosk with a large trail map and other information about the park posted there. 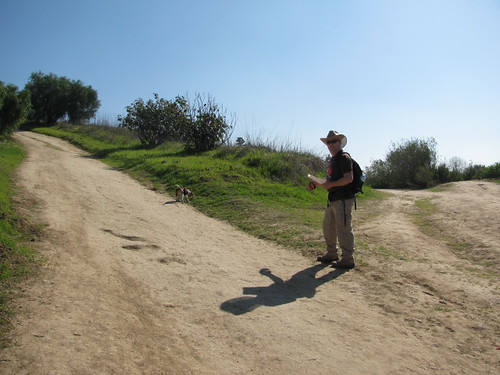 First fork in the road after heading up Peppergrass Trail. We went right, but left would have gotten us away from the homes sooner..

There were two options, one straight ahead (Hellman Park Trail) and one off to the right (Peppergrass Trail).  We’d decided to head up Peppergrass to Rattlesnake Ridge, and then back down Hellman Park Trail to the parking lot.  In the beginning, you are walking right along the edge of the park, with houses and the City of Whittier and a view out into Orange County on the right, before it heads a bit north, into a bit more seclusion.  There is a short single-track stretch (the only place we encountered mountain bikes, naturally…), but most of it is a dirt fire road that heads steadily up the hill for about a mile, before leveling out and following the ridge for most of the rest of the hike. 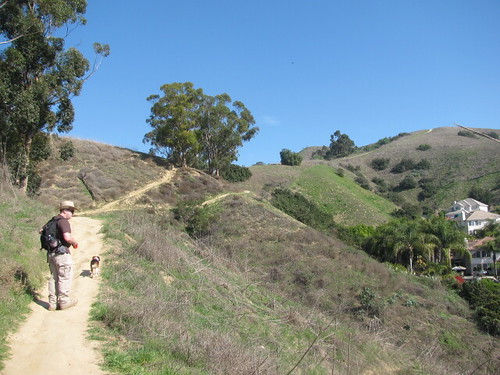 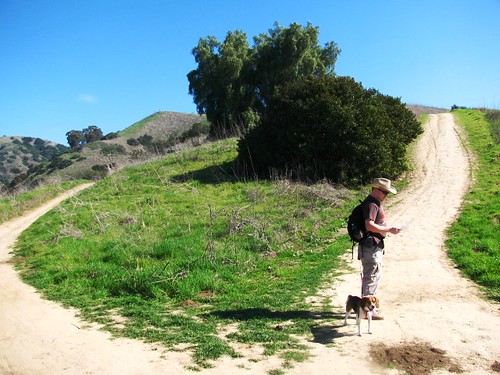 Second fork in the trail along Peppergrass. Once again, we went right, but later we realized left was the shadier, prettier choice

There were two alternate tracks off to the left along the beginning stretch of the hike, both of which eventually reconnected with the main trail.  Both times we stayed towards the right, but I think that if we did it again, we would have chosen the leftward route both times.  Those paths would have taken us a bit more away from the houses and the city, and the second alternate path looked considerably more shaded than the main path we chose when we caught a view of it on the way back down later.  The main trail was very exposed, with little to no tree cover and only a few shady spots when the hill itself blocked the sun.  On a hot summer day, this is probably not a very pleasant hike, but on this 70 degree January day, it was quite nice. 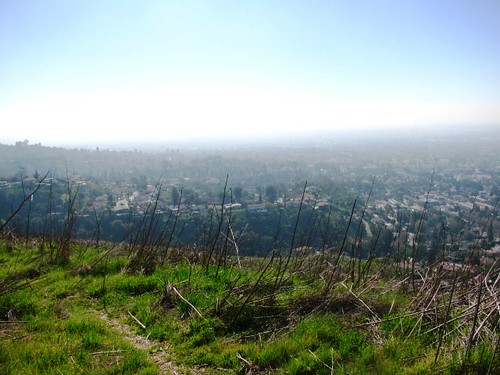 On a clear day, this would be a beautiful view from the overlook point at the top of the first serious climb on the trail

There was a very nice overlook on the path we took, which would probably have provided a view to the ocean on a clear day, but the “marine layer” didn’t allow us to see to much.  This overlook would not have been accessible from the leftward path we passed, but since you get an even higher and better 360 view at the top of the hike, I don’t think you’re missing too much by skipping it, but coming at the end of the steepest part of the hike, we were both pleased to have the excuse to catch our breath and enjoy the view. 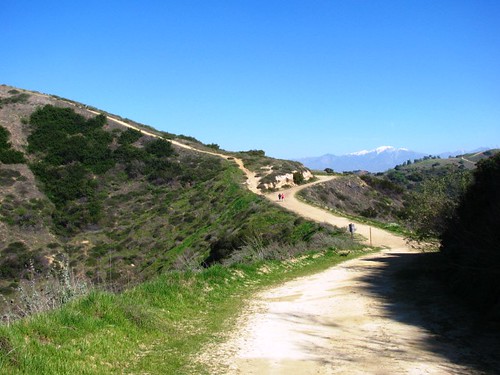 This is the stretch where the hike was very pleasant. Up ahead is our first view of the snow-capped mountains, and a shot of the steep climbing alternate route to the left. This time, we were glad we stayed on the main path

Things leveled out shortly thereafter, and became a very easy hike from here on out.  We soon were catching regular glimpses of the snow-capped San Gabriel mountains in the distance, and the city sights and sounds were quite a bit behind us.  As we approached the junction with Rattlesnake Ridge Trail, there was another single track alternate route to the left that went up to another peak another hundred feet or so above us before re-joining the main trail later, but we chose to stick to our original route. 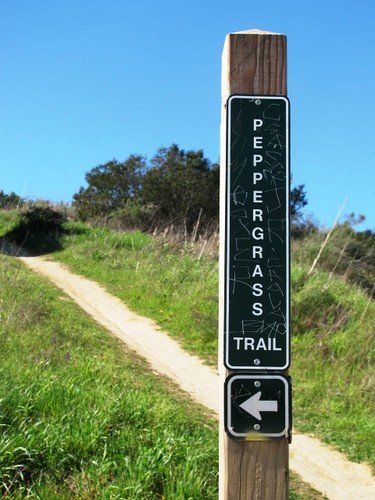 One of the very few labeled signs we saw in the park, and even it only listed one of the two trail names at the junction. Definitely print and bring your own map from the website!

When we hit the Rattlesnake Ridge Trail junction, we were met by a great view of the San Gabriel Mountains and the San Gabriel Valley.  You are also right across from the Hsi Lai Buddhist Temple, supposedly the largest in the US, but more importantly to a political geek like me, was the site of the fundraiser that became the centerpiece of President Clinton’s 1996 Chinese campaign finance scandal. That’s a picture of it at the top of this page.  <NOTE:  Actually it is not that temple, but merely the Buddhist Memorial Columbarium at Rose Hills Memorial Park, which was just brought to our attention by SkyHiker in our comments below.  His excellent blog can be found at:  http://www.myown100hikes.blogspot.com/)

The mile long stretch from here to the water tank at the end of the trail was featured level, easy terrain, looking down into tree-lined Sycamore Canyon below and out into the San Gabriel Valley on the right, and views towards Whittier and Orange County off to the left.  On the way to the tank, you’ll pass the Hellman Park Trail junction on the left, and a narrow single track “Sycamore Canyon Switchback Trail” to the right (no dogs allowed!). 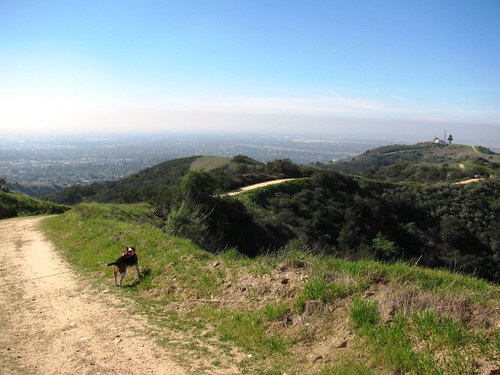 The final stretch of trail along Rattlesnake Ridge to the water tank. Sycamore Canyon is below to the right. 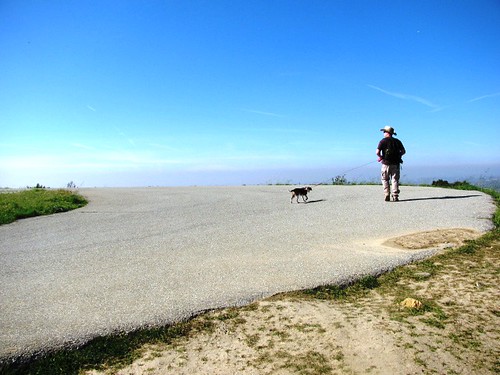 Paved section up at the water tank, from whence hazy 360 degree views abound!

The water tank area is paved, and offers a 360 view of San Gabriel Valley and Mountains to the north, Downtown Los Angeles to the west, and Orange County to the south.  There was actually a horse trough being fed a steady trickle of fresh water next to the tank that Holly briefly enjoyed, and we humans took the opportunity to sit a few minutes and snack on trail mix and jerky before finishing up the hike. 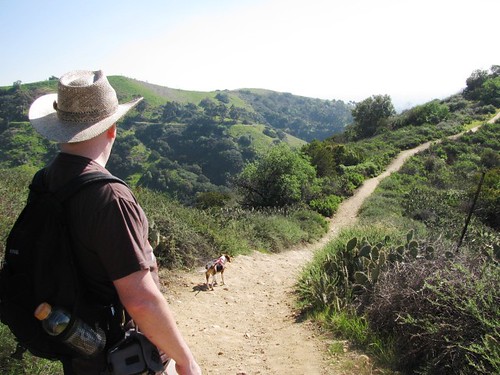 Heading down Hellman Park Trail, and looking across at the shaded trail we should have taken at the second fork in the road mentioned (and pictured) above

When you’re ready to continue, you’ll retrace the last half mile to the tank before heading off to the right down Hellman Park Trail.  It quickly turned into our favorite stretch of the hike, narrowing nicely and descending into a variety of cactus, sprouting wildflowers (just starting to emerge–this is probably a much better hike overall when the wildflowers are in full bloom in the spring), and eventually trees, as we headed into the canyon that leads back to the parking lot.  We even saw our first snake of the season–a good sized garter snake, but didn’t have time to get a picture of it.  The trail was single-track all the way down, with some spots that were steeper than anything we climbed on the way up, and then a series of switchbacks for the last stretch, to negotiate down along the canyon wall. 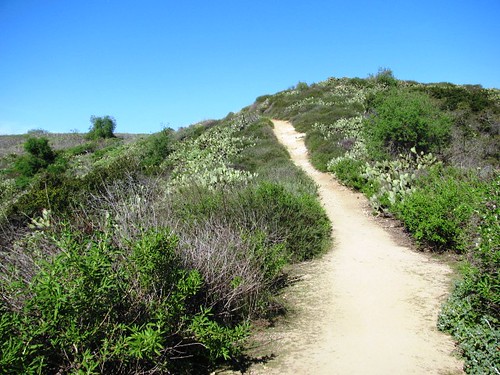 I liked this section of trail. Felt like it was actually a real trail, rather than a glorified fire road 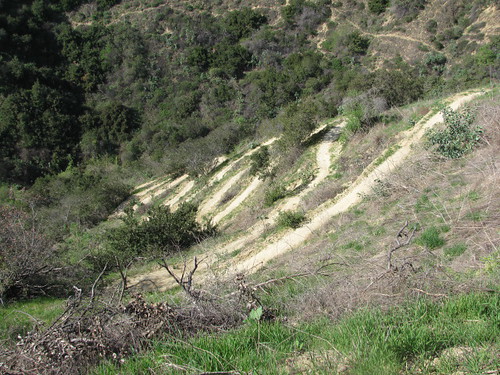 Switchbacks heading down the steep canyon wall in the final stretch 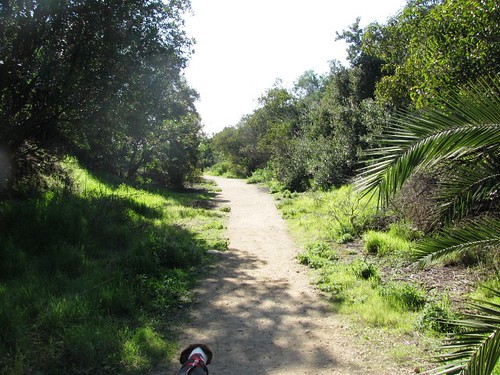 The final leg along the canyon floor was very nicely shaded, but discarded beer bottles and graffiti soon reminded us how close we were to the city, and before you knew it, we were walking along the covered reservoir and back at the parking lot. 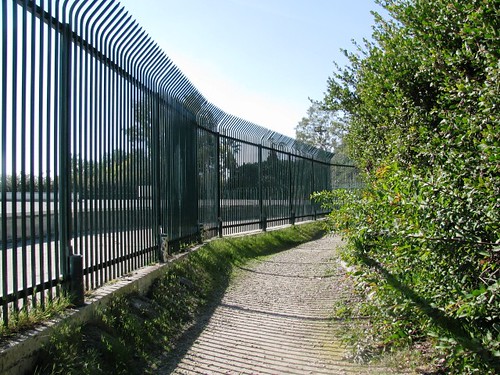 Walking along the fenced, covered reservoir as we approach the parking lot

In summation, it wasn’t exactly a wilderness hike, though it did have moments where it felt like it, which is remarkable considering how totally surrounded by civilization this park really is.  It would have nice views on a crisp winter day, and is probably beautiful during spring wildflower season, but I’d likely avoid it in the heat of the summer.

Elevation profile of the hike. Hard to read here, but you get the idea, and if you want more detail, you can click on the picture to see the original graph on Flickr

Check out reviews from others: