Summer time can be tough for hiking in Southern California.  The arid climate means very few trees for cover in the lower mountains around Orange and Riverside Counties, making them way too hot for hikes that last through the noon hour–and since we aren’t very good at getting up early,  most of our hikes do.  So we have tried to save some of the cooler (temperature cool, not wicked awesome cool) hikes for summer time.  Usually that means tree-covered (typically in the higher elevations of Angeles and San Bernardino Forests), with running water along creeks (often hard to find by the end of summer), or along the coast.  This was how we came to choose this hike in Laguna Coast Wilderness Park for a birthday hike on Labor Day (September 6, 2009). 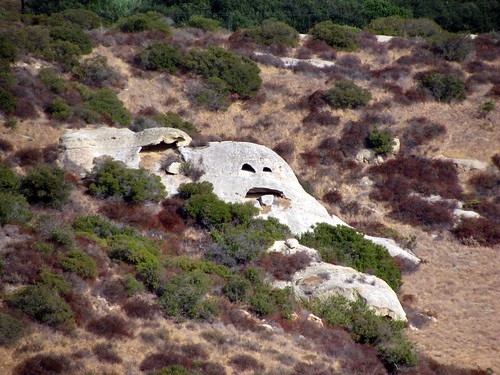 On the map, it was clearly pretty close to the coast, and we thought it might benefit from a cool breeze on an otherwise hot day.  Unfortunately, it was a very hot day, and this trail is very exposed, and we learned quickly that you only have to be one ridge away from the ocean for it to still be very hot, and in a canyon, there really is no breeze at all.  But that’s not to say it isn’t a nice place for a hike, and it is probably a great hike in the spring when the wildflowers are in bloom, on cooler fall days, or a clear winter day, when from the top you’d get a great view of the coast from Catalina up to Long Beach and even Malibu!

We parked in a small parking lot off Laguna Canyon Road, just south of the 73 Toll Road (we took Laguna Canyon from the 5).  You can buy a single parking pass for $5 on the weekends (or $3 on a weekday), or a season pass for $55.  Our plan, based on a Trails.com trail guide, was an 8.4 mile loop hike up Willow Canyon Trail and then down into Emerald Canyon and back.  The Willow Canyon Trail starts right outside the parking lot, and goes by a small ranger trailer that has maps (sometimes). 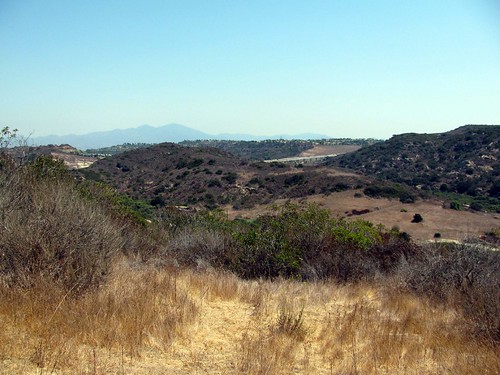 Does this look hot and exposed in the September sun? That's just because it is.

The trail immediately and steadily climbs from the base at about 200 ft above sea level up to the peak level of 950 ft over about two miles.  It isn’t a super steep climb, but it is relentless and exposed, and on this 90+ degree day, it kicked our butts pretty good.  By the time we reached the top of Willow Canyon Trail and hit Bommer Ridge, we were actually ready to just turn around and go home!  Our planned trail into Emerald Canyon immediately descended fairly steeply right back down into the next canyon over the ridge, which meant we were going to have to do another exposed climb out of the canyon at the end of the hike, and we just weren’t up for that anymore.  We also figured that while there were trees and likely a cooler climate at the base of the canyon, we were once again going to be sheltered from the cool coastal breeze, that we were only now noticing up at the top of Bommer Ridge. 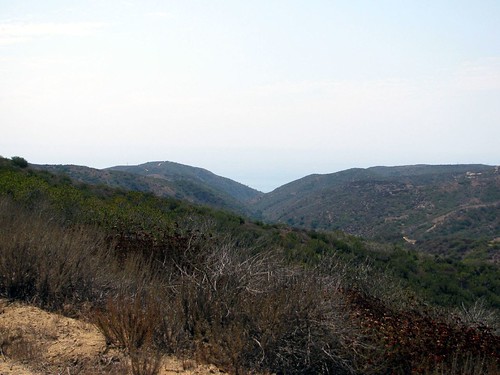 Our first view of the coast, at the junction of Willow Canyon and Bommer Ridge 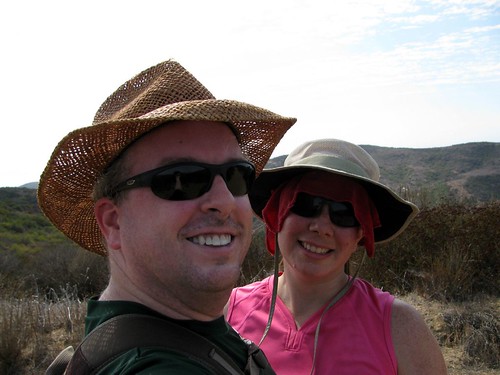 Colleen has already donned her air conditioned wet rag under her hat by now, hoping to stave off heat stroke...

While catching our breath and taking in the view of the coast from this ridge and enjoying the refreshing breeze and dreading the thought of another climb at the end of our hike, we noticed that off to our left was a fire road/trail (not on the official park trail map) that just seemed to follow the ridge and headed towards the coast, without much elevation gain or loss at all!  We thought that option might be better for us, getting a closer beach/coast view, maintaining the coastal breezes along the way, and allowing us to turn around anytime we started to get bored or tired.

This turned out to be a great plan, as the conditions along the bridge were indeed much more pleasant than in the canyon, and even though there was still no cover from the sun, the breeze was very nice and the views were great!  We had a near constant view of the ocean to the west, and much of Orange County to the east.  We followed the path along the ridge out to a nice lookout point over the city of Laguna Beach, where we had a slightly hazy view out to Catalina Island due west, and a decent view of Palos Verdes Peninsula and even the Malibu/Ventura Coast to the north!  I suppose we could have followed that path right down into town and had a drink at Hennessey’s or something, but then we would have had to either climb back up the ridge again (something we both opposed) or called a cab to get us back to the parking lot, which, as I think about it, might not have been a bad idea… 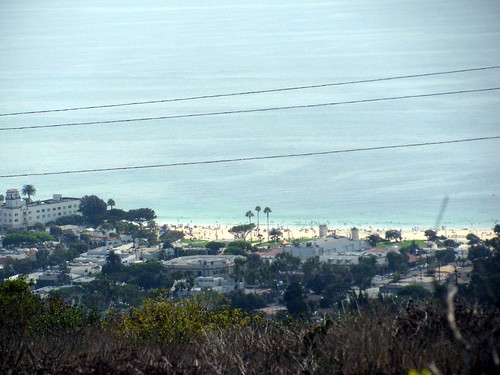 A view of Laguna Beach from the point at the end of our hike--you can almost taste the Smithwicks at Hennessey's Tavern not very far below... 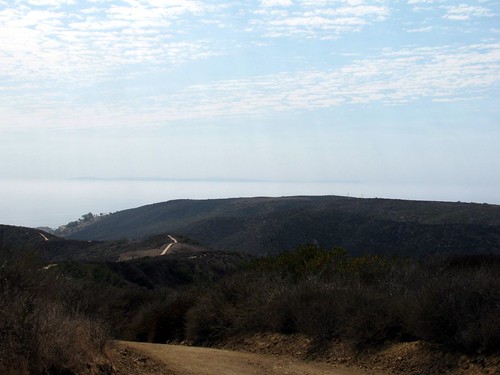 A look north, across Crystal Cove State Park (no dogs allowed) and up the coast to the Malibu/Ventura County shoreline

But the walk back from the ridge wasn’t nearly as grueling as the walk up.  As you can see in the elevation profile below, the whole ridgeline was relatively flat, so we enjoyed some of the features we missed (or ignored) on the way up, and spent some time trying to get a good shot of the vulture that kept buzzing us, apparently certain that we were going to drop dead at any moment–though we really were feeling a lot better… 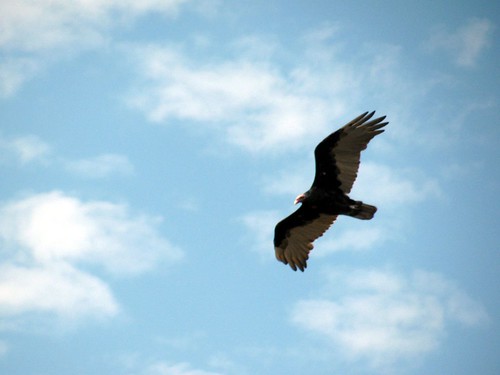 WE AREN'T DEAD YET, YOU LOUSY VULTURE!!!!

Our modified route ended up being almost precisely 9 miles, according to my brand new DeLorme PN-40 GPS that my lovely wife had given me for my birthday (that’s me playing with it in the picture at the top of the page), so a little bit more mileage, but significantly less climbing than our original plan.  We planned to come back to do the Emerald Canyon hike at some point when it was cooler and we were in better shape, but we have since acquired a dog, and since dogs aren’t allowed in the OC Wilderness Parks, we have not returned since. 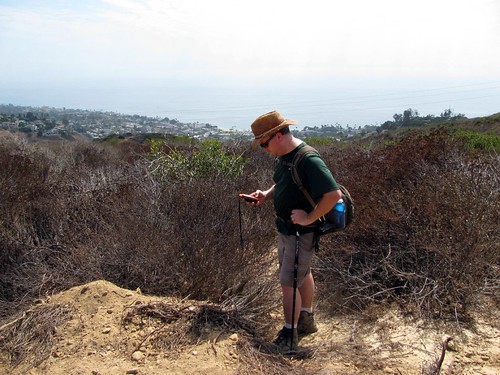 The elevation profile of our hike. Click through to read the details more clearly