You are here: Home / Hike Reviews / Hikes By Distance / 3 Miles or Less / Bonita Falls in Lytle Creek–Yosemite’ish falls in SoCal?

On Presidents’ Day this past weekend, we were looking for an interesting hike with the kids that wouldn’t require us to drive all the way across the LA Basin, and would avoid all the closed parks and trails that followed the recent rains.  Once again using Trails.com as our initial guide, we settled on trying to hit two short hikes on Lytle Creek, about 45 minutes from our home in North Orange County right at the base of the Cajon Pass in the San Bernardino National Forest.  I’d only ever been up in Lytle creek to shoot in one of the “designated” shooting areas in the forest years ago (it appears to be a professionally managed range now, but was more of a free-for-all back then), but was looking forward to getting a different view of the area.

Our first trail (labeled as “Lytle Creek South Fork”) was only about two miles round trip to Bonita Falls, which is billed as the 2nd largest waterfall in Southern California.  We figured we could hit that and then blaze on to the Middle Fork hike, which was an additional 2 miles of streambed hiking, in order to get something closer to our preferred distance for a hike.

But as it turned out, that wouldn’t be necessary.  It wasn’t exactly a marathon or grueling hike, but it ended up being plenty for the kids and us on this particular day, and that was largely the nature of the trail itself. 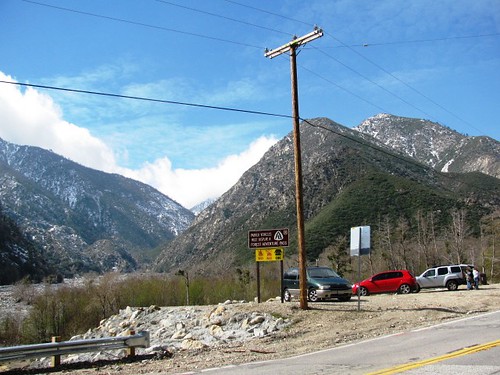 The parking area at the trailhead to Bonita Falls

The parking area was not as clearly marked as we expected.  Our Trails.com guide ($$ site) indicated it was 5.5 miles from the freeway, or from the point it became Lytle Creek Road, or something like that.  There were several pull out parking areas along the stretch, and we kept waiting for one to be marked for “Bonita Falls”, but finally decided to park where there was an obvious creek coming in from the west (left) side of the road to the main stem of the creek that followed the road.  This spot was immediately between the “Green Mountain Ranch” (where we totally could have gotten married if we’d known about it and it hadn’t been scheduled for hotter’n blazes August) and Bonita Ranch Campground (a private RV park). 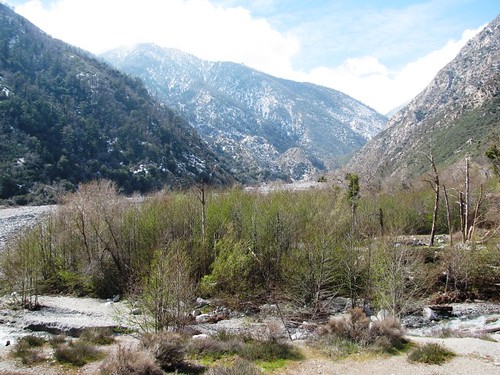 A look up the South Fork of Lytle Creek from the parking area. 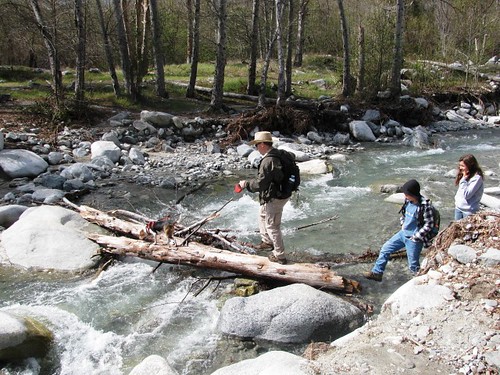 The first--and widest, crossing. The logs were sturdier than they looked, but may be a bit intimidating for younger kids or wimpier dogs

This time of year, the creek in front of the “parking area” was running pretty high and fast, and while there were bridges that may or may not be accessible to the public at the Ranch and Camp mentioned above, there was also a log crossing that looked sketchier to cross than it actually was.  Note that the annual ebbs and flows and heavy use of the creek could change the location and existence of these logs or rock crossings, but it worked for us on this particular day. 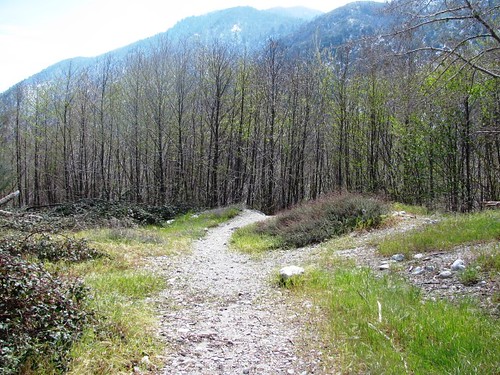 First stretch of trail on the other side of the crossing goes through a stand of trees and poison oak (visible on the left). These are the last trees and last visible trail until you get to the canyon up to Bonita Falls 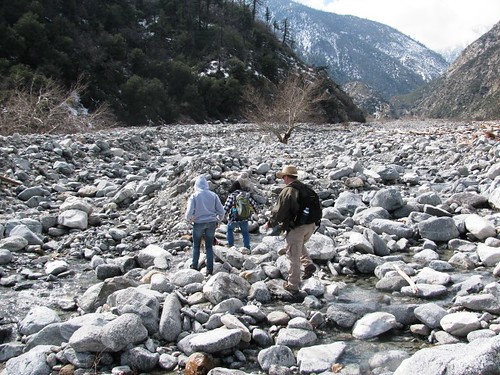 Heading up the rocky creekbed. See a trail? Neither do I...

Unlike most of our hikes, this was not an obviously maintained trail at all.  There were sections that appeared more traveled than others, but by and large, we mostly just followed the creek up the canyon, making our own trail along the way.  This was definitely not the standard SoCal fire road, or even a well-carved single track.  It was navigating up the very rocky wash, sometimes walking on sand, sometimes on gravel, often hopping from boulder to boulder, and occasionally having to find ways to cross the creek, as we tried to determine the best path and just made things up as we went along.  Now, on the way back, we found an easier path than we took up, but it still required actual focus and concentration on where you stepped and good footwear (flip-flops would not be a good idea) to prevent twisted ankles or nasty falls. 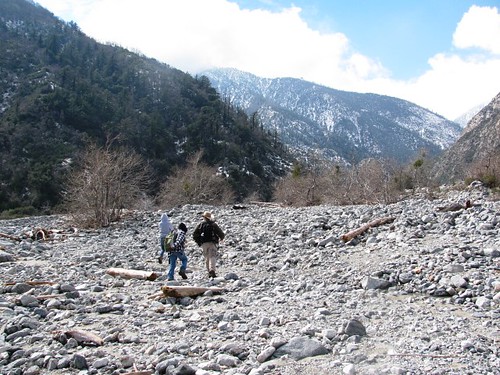 I don’t want to oversell the difficulty, because we were hiking with a 12 year old boy and a 15 year old girl and a beagle, all of whom thought it was one of the funnest (yes, I know it’s not a real word) hikes we’d done.  They loved the creek crossings, and the adventure of carving our own path up to the falls.  Oh–And the  snow!  On this particular day, there was a goodly amount of snow still left on the ground along the north facing slopes on the south side of the “trail”. 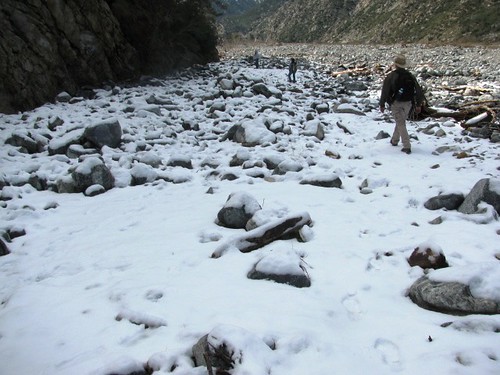 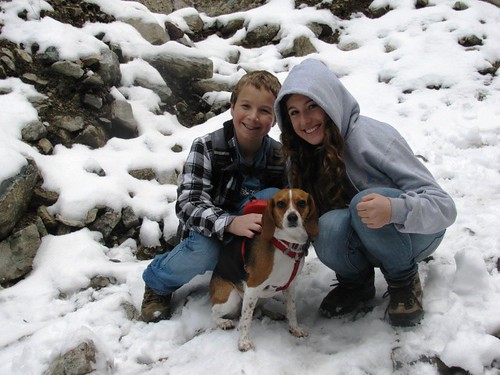 Even more snow heading up the canyon--enjoyed by kids and dog alike. 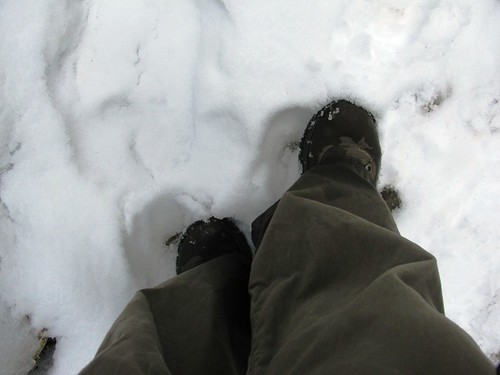 Snow was even kinda deep at some points! 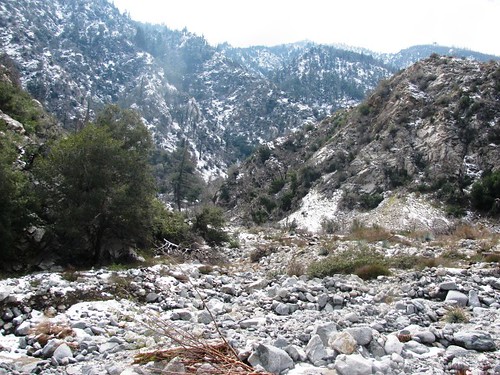 The fork in the trail past the falls cut-off. This is looking to the left, where we thought we were supposed to head 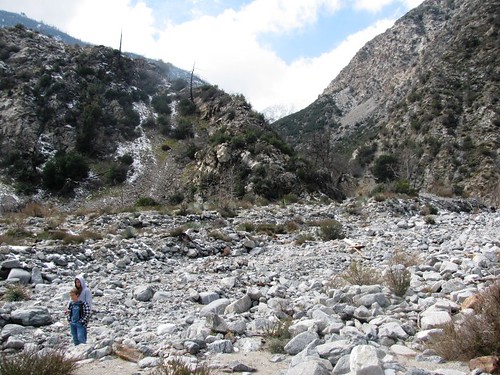 This looks towards the right fork of, where our map indicated the trail continues, and the main stem of the creek seems to originate. You could follow the trail on up this way after the falls if you were looking for some more mileage on your hike

We actually missed the canyon up to the falls on our way up.  We knew it was only supposed to be .9 miles from the parking area, but at about 1.3 miles from the parking lot, we came to a place where the canyon split.  Our guide said the canyon we wanted was supposed to be on the left, but the trail seemed more developed to the right.  We double-checked my GPS, and the pre-loaded maps and a geocache I’d downloaded earlier seemed to indicate that we’d already passed the falls!  We couldn’t figure out how we’d missed them, but we turned back, looking for a canyon to the south, and watching the GPS much more closely this time. 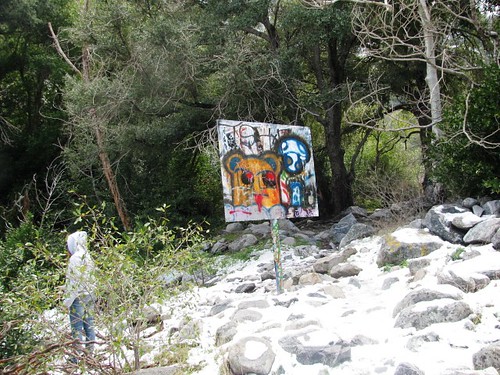 Ah! We've found the trail up the small canyon to the left! And every trail needs a good, ummmm... Pokemon sign? Sign was not clearly visible from the main creek, which is why we missed it, and why we recommend hugging the south wall. 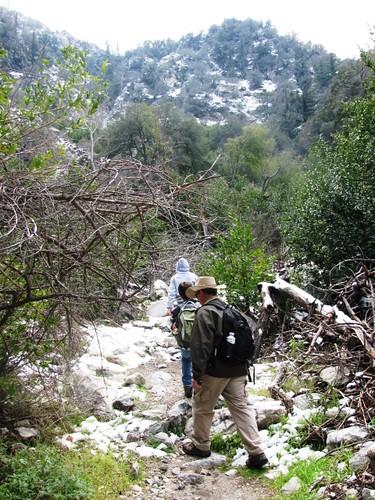 Up the narrow, but slightly better marked trail to the falls. 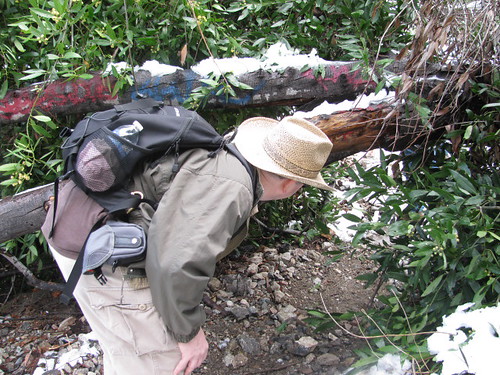 Several trees and limbs lay across the trail, requiring crawling under or over. Note the lovely graffiti on the fallen log.

This time we caught it, and it was indeed very easy to miss if you simply were following the creek upstream.  But there was a trail that went into a narrow canyon, and headed fairly steeply uphill.  There was a big sign that probably used to say something relevant about the falls, but was long since covered with graffiti, and then several fallen trees we had to navigate.

We almost screwed up again, as we reached what seemed to be the end of the trail near a nice set of falls and a large fallen tree that obscured most of it.  Had the tree covered up the falls?  Hunter and I did a quick recon of the area and found another path that continued to head up the steep canyon where WOW!  CHECK OUT THE FALLS!!! 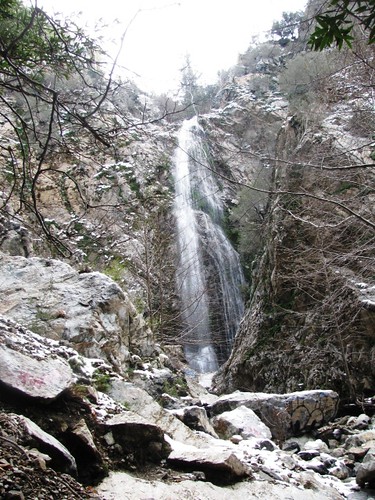 Our first views of the falls! 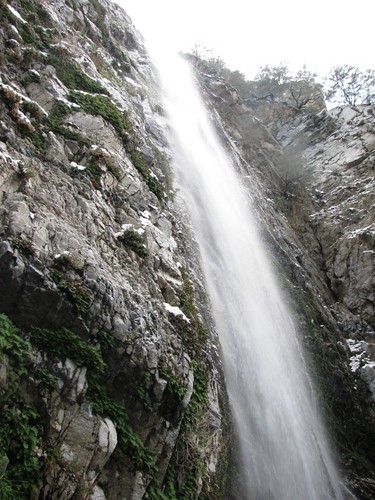 Serious water coming down a serious set of falls! 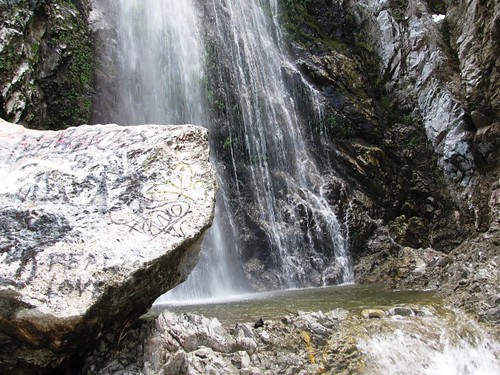 A nice swimming hole at the base of the falls--on a day when snow doesn't surround it!

Once we saw the real falls, there was no question we’d made it to the right place.  It was really Yosemite/Bridalveil Falls-like in the way it tumbled off a ledge high above and down a sheer rock face into a pool below.  It really was breathtaking in its beauty, located in a narrow box canyon.  We were lucky enough to be alone at the falls on this day, but I understand it can get quite crowded on a hot day, and there were indeed many signs of friggin’ idiots around—primarily in the form of graffiti and garbage.  I understand the attraction, as there were many great looking swimming holes along the way, and really the entire creek looked like it would be refreshing on a hot Inland Empire sort of day. 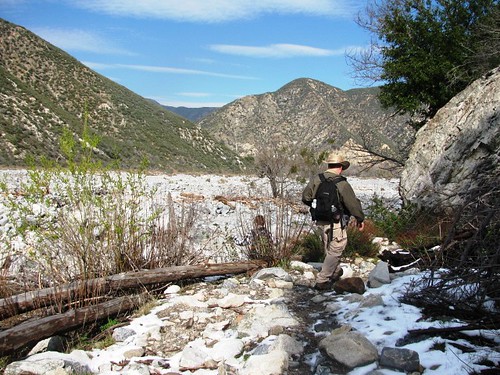 When we got back down to the main stem of the South Fork of the creek, we were able to more easily discern a slightly more distinct trail heading back to the parking area.  It was still not anything like most of the paths we follow, but there was less boulder hopping and no creek crossings were necessary until we got to the first two crossing of our inbound path.  Our now expert opinion was that you would probably be better off following this path along the canyon wall on the way too the falls, as it would make it much less likely that you’ll miss the spur to the left that gets you there, and then, if you were looking for more adventure, you could rock hop your way back to the parking area along the creek, when it would be impossible to get lost and you could spend some time playing in the creek along the way if you were so motivated. 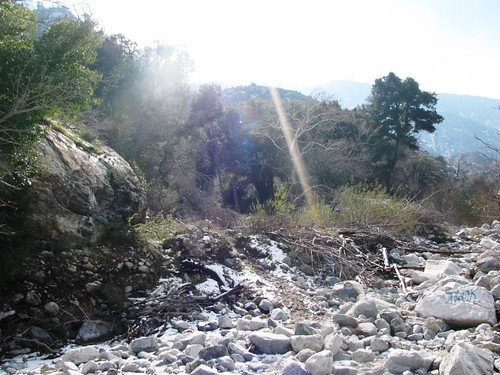 This was the actual entrance to the falls trail along the south side of the canyon. Easy to miss if you're not paying attention

If you follow those instructions to get to the falls and find them on the first try, but feel like you need to add more time and distance to your hike, you can proceed up the trail we accidentally took further up the canyon.  Take the fork to the right on up the creek when you hit the obvious divider, and you can go another 2.5 miles or so, passing several more sets of falls and rapids before it becomes impassable (according to other trail guides).

In summary, this is a great hike to do in the early spring when the falls are running at their strongest, but also likely a very refreshing hike in the summer if you stick close enough to the water and take the time to enjoy it–though the flows at the falls are likely significantly reduced. Follow the south canyon wall if you don’t want to get lost, wear good boots or hiking sandals, and be prepared to be surprised by an awesome set of falls less than a mile off a paved road!
View Lytle Creek Bonita Falls Hike in a larger map

Bonita Falls elevation profile. Note that we traveled extra distance before we headed up the correct falls path, which is the steep spike. So maximum elevation and climb is correct, but your distance may vary. Click through for more detail