You are here: Home / Hike Reviews / Hikes By Distance / 3.1 to 5 Miles / Solstice Canyon to Rising Sun Trail above Malibu

When you think of Malibu, I always think of ocean views, rich people, and wildfires, and this particular hike manages to prominently feature all three! On a recent warm February SoCal Saturday (suck it, Midwest homies!), Colleen and I headed out to Malibu for what appeared to be a pretty easy combo hike of two different loop trails with some historic residences and ocean views.  We’re still getting back into hardcore hiking shape, and it was one of the few trails that was reasonably long, but still interesting with the option to add more mileage if we were up to it.  It was in the Santa Monica Mountains National Recreation Area, so unlike nearby Malibu Canyon State Park and the other State Parks and Beaches nearby, they allowed dogs.

Unfortunately, there’s no easy, traffic-free way to get to this part of Malibu from Orange County.  You can either go out the 101 to Las Virgenes/Malibu Canyon Road and head towards PCH, or you can take the 10 West all the way to where it dead ends at PCH and then head north a half hour or so (give or take according to traffic) to Solstice Canyon.  If the 101 is clear, that is probably the quicker route, but the ride up PCH and along the beaches of Malibu may be worth the time for you. 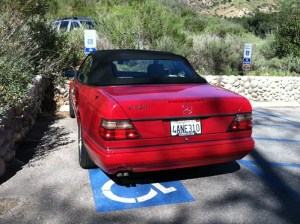 We woke up later than planned and got out to Malibu even later.  We’d been warned that this was frequently a crowded hike and that the small parking lot at the trailhead fills up quickly, and there were many cars parked along the road a ways down the hill from the parking lot. Fortunately, on our third or fourth pass through the little lot, we caught someone leaving.  Perhaps we were lucky to be so late that people were already returning?  One car that was just as late but not nearly as patient or law-abiding as us was this convertible Mercedes with two perfectly healthy young ladies who swept right into the handicapped stall, hung up their mommy’s (or someone’s) disabled placard, and headed off to hike.  Unfortunately, there was no cell signal in the parking lot and no ranger nearby, so we weren’t able to rat them out, but should you see them, feel free to wish (or do) nasty things upon them for us. 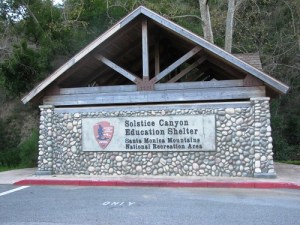 The interpretive center in the parking lot may or may not have trail maps, so as always, come prepared with your own.  We headed west from the trailhead up Solstice Canyon Trail, along a paved path past some vault toilets (clean, but still vault/pit).  Less than 1,000 feet from the parking lot was a really nice small picnic area next to the creek, with big trees and lots of shade.  It is very difficult to get lost along this route.  It is paved for most of the first mile, and at the one almost confusing junction about a half mile in, you take the obvious right path.  At just under a mile, the paved path turns to dirt almost immediately before you run into the first abandoned cabin foundation:  the Keller House, built of stone in 1903 after the initial cabin on the site burned.  There is a bridge here that you can take over the creek to get a closer look at the structure, which finally burned for good just recently in 2007. 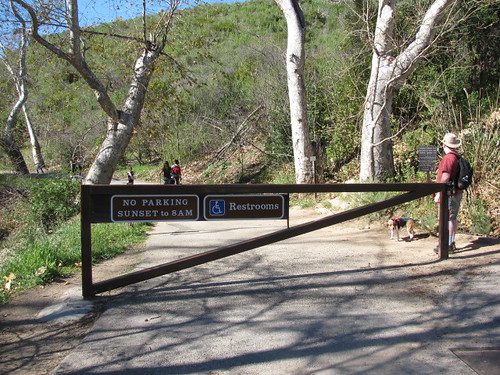 The beginning of the Solstice Canyon Trail 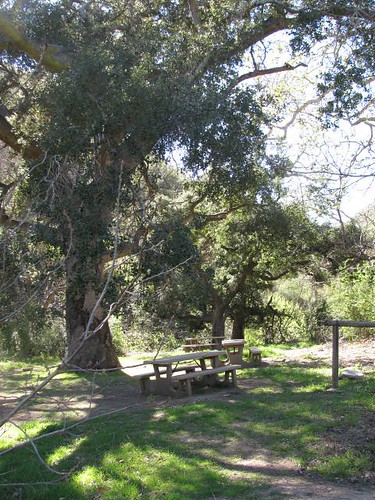 Nice picnic area just outside of the parking area 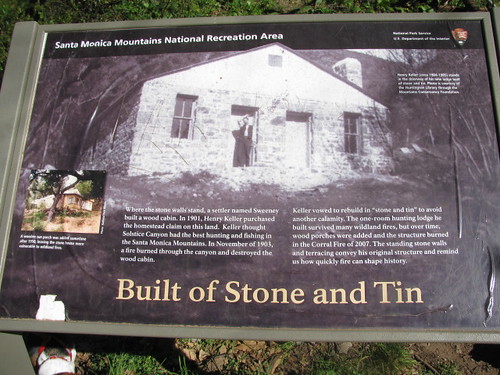 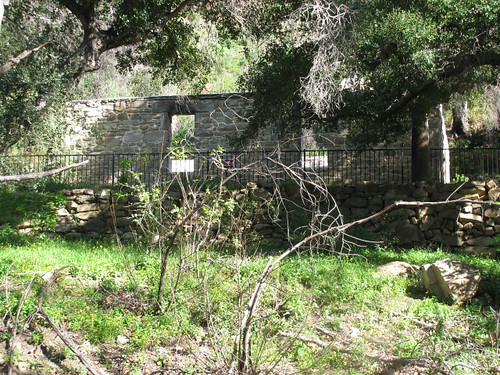 Keller House ruins from the trail 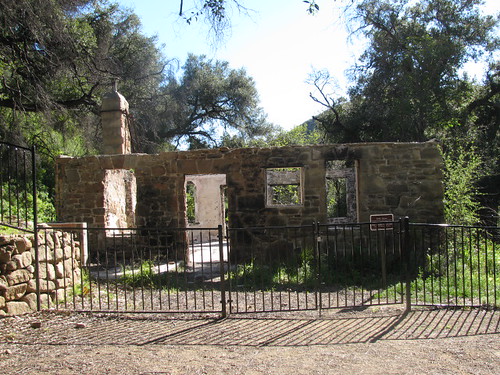 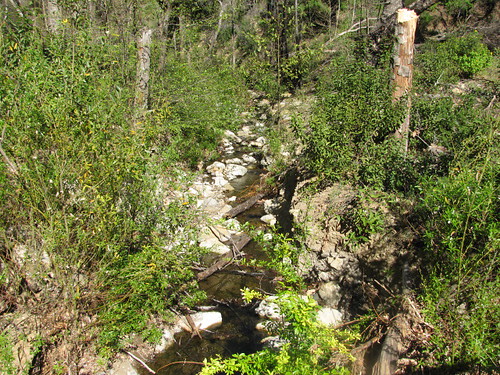 View up the creek from the bridge to Keller House

As you head further up the trail, there is another fork where you could take a more traveled path to the left or a single track to the right.  We took the left, to be sure we got where we were going, but the paths quickly re-connected, making us wish we’d taken the lower trail along the stream rather than the higher one.  Didn’t really make much difference, but it would have been moderately cooler and closer to the water.

At about 1.5 miles you will pass the trail junction for the Sostomo and Deer Valley Loop trails, just before you hit the ruins of the Robert’s mansion, built for a grocery store magnate in the 1950’s by Paul Williams, a famous African-American architect, who apparently built the famous theme restaurant at LAX, among other things.  The pictures on the interpretive signs and the ornate stonework and chimneys left standing after the main structure burned in 1982 make it look like an amazing place to have lived.  On the same plot, is a short path up to a great little waterfall and some swimming holes, which can be even more crowded and loud than the rest of the path up. 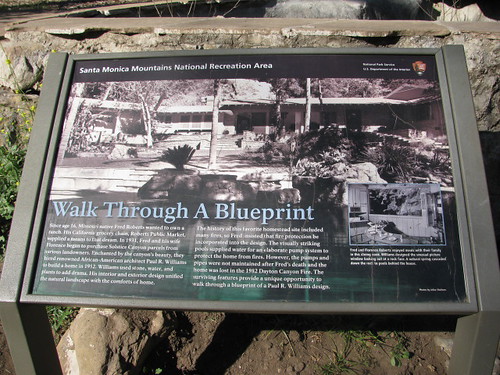 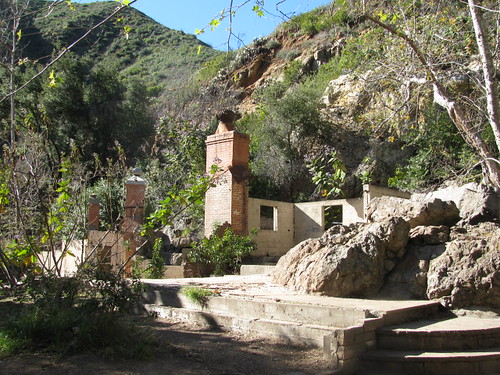 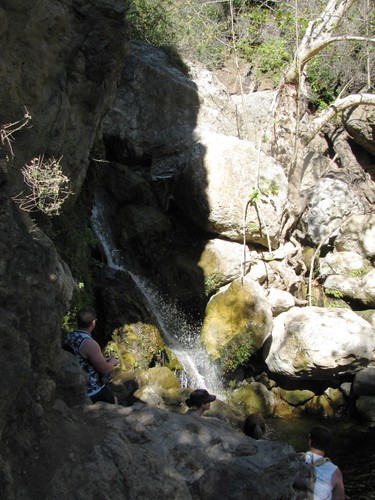 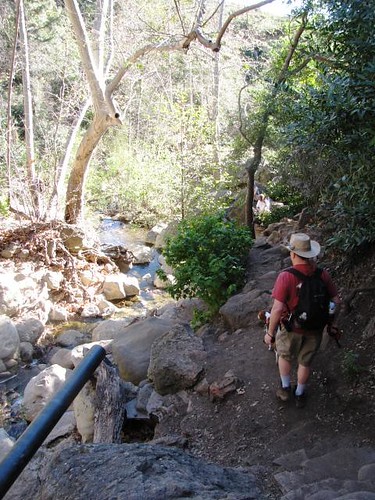 After seeing the ruins and the falls (but missing the Madonna statue that is apparently there by the falls), we headed up the Sostomo  trail towards Deer Valley Loop.  Our plan was to add this 4 mile stretch to what otherwise would have been less than a 3 mile round trip, as we were still feeling pretty good.  We headed up the north wall of the canyon on a fairly steep gradient that rapidly got away from the crowds on the main path below.  We could also see the Rising Sun Trail back to the parking lot on the opposite canyon wall, rising very steeply and very exposed in the afternoon sun.  We decided then that we would just do the Deer Valley Loop and walk back down Solstice Canyon the way we came. The Sostomo Trail eventually crossed the creek up above the waterfall at the Robert’s place, and then went on up another hill.  As we wound up that more exposed path, we caught our first great glimpse of the Pacific Ocean. 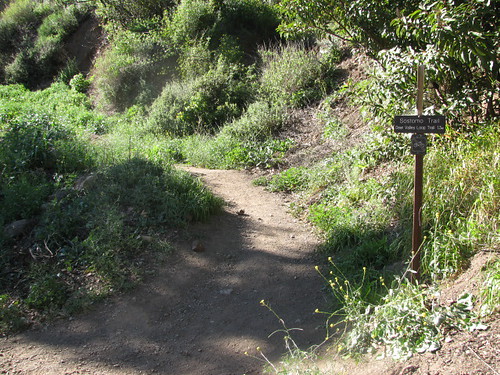 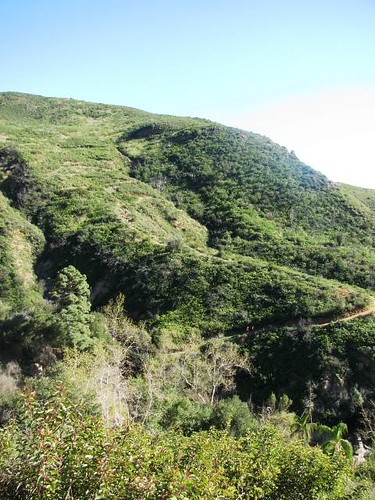 The very exposed "Rising Sun" trail across the canyon 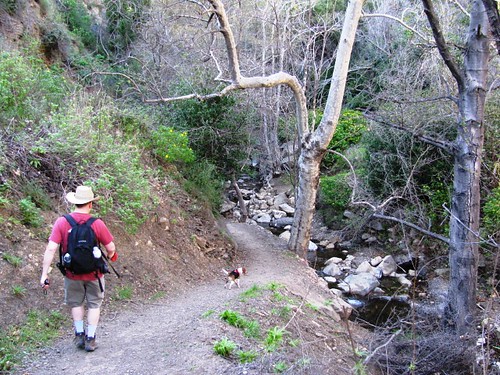 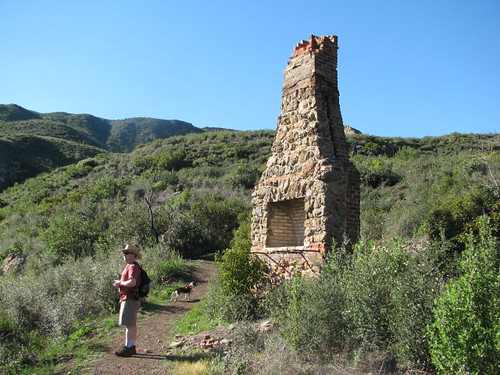 Another set of burned out ruins from another wildfire. We turned around here. 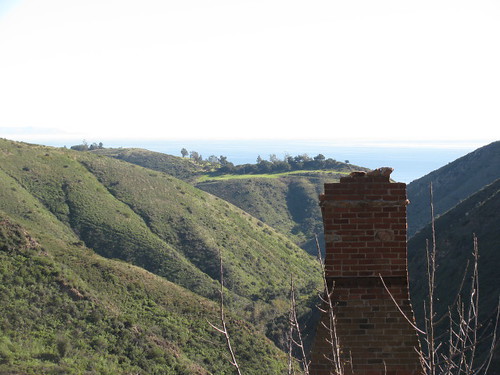 View from the burned out cabin where we turned back. You can see why Malibu residents risk the wildfires, eh?

While resting at yet another burnt out ruin, we encountered a couple coming down from the top of Deer Valley Loop.  While they insisted that the hike up to the top of the Loop and the 365 degree views of the coast and the mountains was worth it, when we realized how much further it was, we realized we needed to turn back.  Not because we didn’t have the endurance or energy, but because we didn’t have the time!  Unfortunately, our late start had put us too far behind, and it was extremely likely that it would be sunset when we hit the top, and we’d have to hike back down in the dark.

We had heard that the Rising Sun Trail we had originally planned to take back, but then had ruled out would give us some pretty spectacular views all the way to the parking lot, so we decided that since we were no longer doing the big climb up to Deer Valley, we’d do Rising Sun instead.  So we headed back down to the Robert’s Mansion and crossed the stream to start up the east canyon wall.  It was indeed as steep and exposed as it had looked from the Sostomo Trail, and we stopped frequently to catch our breath and hydrate.  But once we hit the peak elevation about 650 feet above the bottom of the trail, we were able to catch a nice breeze and were treated to some spectacular views of the ocean for the rest of the hike towards the parking lot. 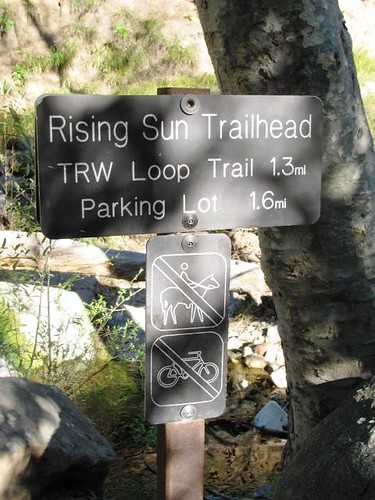 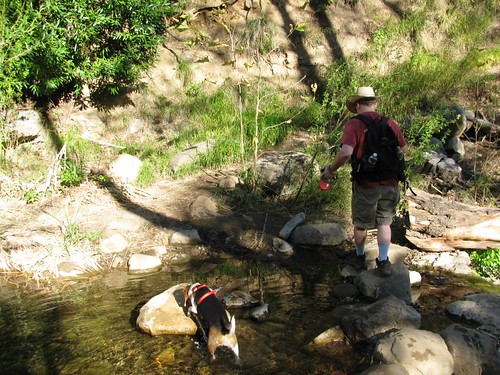 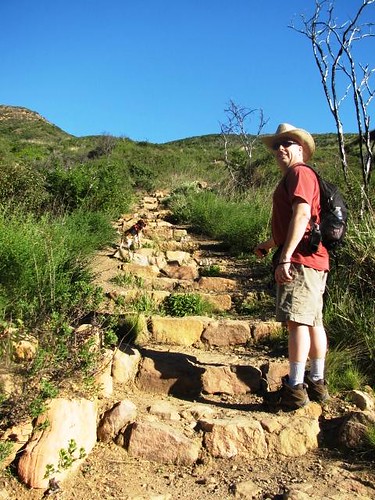 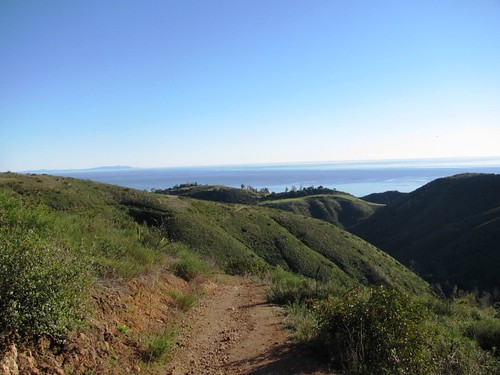 View from the top of the Rising Sun Trail. 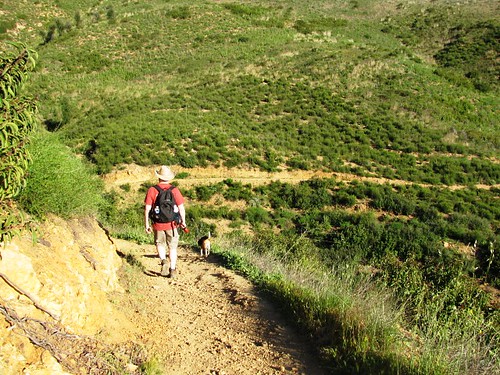 More of the Rising Sun trail. See any shade? 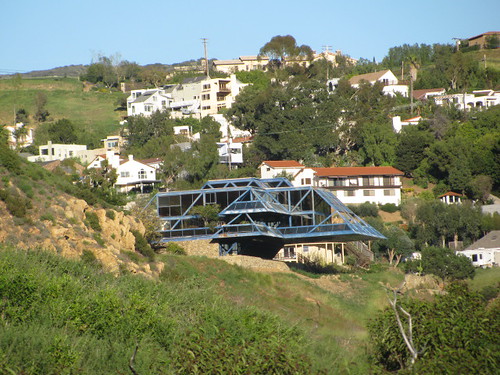 Unbelievably tacky looking erector set house above the trail with what must be amazing views of the ocean.

The Rising Sun Trail dead ends at the top of the TRW Loop, named after the old TRW space research facility that was built here in the 60’s.  This is one of the best view areas on the trail (see photo at top of post with Catalina Island and San Nicolas Islands in the distance), and from here it is a short walk down to the parking lot and the crappy traffic headed back home. 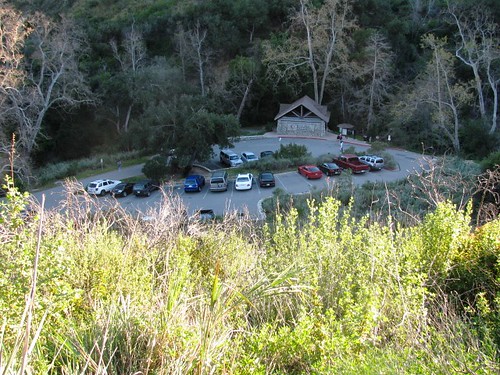 View from the TRW Loop Trail down to the tiny parking lot (my silver Xterra on far right, a-hole Mercedes now gone)

It was a really nice hike, well-shaded in the canyons, though very exposed on the canyon walls.  We’d like to go again sometime early enough that we could make the full climb up to Deer Valley before it gets dark and preferably before the hottest part of the day when the sun really beats down on you.  If you do that, you could be back in the car and chill on the beach in Malibu for the hottest part of the day with a nice cold beverage.  Now THAT’S a way to end a hike!

View the Solstice Canyon Hike in a larger map