You are here: Home / Hike Reviews / Hikes By Distance / 5.1 to 7 Miles / The Road to Nowhere — Cold War Paranoia Creates a Great Hiking Trail!

After hiking and enjoying hikes labeled as the “Bridge to Nowhere” and the “Offramp to Nowhere“, we really couldn’t resist a hike called “Road to Nowhere”, especially when we found out it featured views of the trail to the Bridge to Nowhere and featured a local political history angle that intrigued both our geeky minds.  Add that it shares a name with one of my favorite Talking Heads songs, and it climbed right to the top of our wish list!

Think you can outrun this? Then by all means, get in your car and head for Shoemaker Canyon!

The story behind the hike is that it started as a project to build another road to help Los Angelenos get the hell out of town in the event of nuclear attack.  Started in the late 50’s and abandoned in the late 60’s, apparently after a combination of rockslides, environmental concerns and cost over-runs got the best of them, the road was supposed to connect Shoemaker Canyon Road to Angeles Crest Highway to create an escape route to the desert if the Russkies ever launched their nukes at us.  The alleged convict labor got a few miles up the canyon, and even dug a couple of serious tunnels through the rock before they quit, but I dare say the plan was doomed to failure.  At best it was a two-lane road, and based on what I’ve seen of 16 lane freeways under normal conditions, a two lane road in the event of nuclear attack  wouldn’t have gotten too many people out of town.

But what it left was an interesting and easy hike, at least in cooler weather (the hike is very exposed with very little shade along the way).  It was more like a wide fire road for much of the length than we usually prefer, but going through two abandoned tunnels leftover from the Cold War made it all worthwhile.

We headed up Hwy 39 like we did to get to Bridge to Nowhere, turning right on East Fork Road at the end of the 2nd reservoir (going straight would take you to Clear Lake and the OHV areas).  From there it is about 3 miles to Shoemaker Canyon Road off to the left.  If you went straight, you’d end up at the trailhead to Bridge to Nowhere, but this time, you’ll follow Shoemaker Canyon off to the left until it hits a parking area and a gate about 2 miles up the road.

On the day we were there, there was a work crew running tractors at the gate, but the parking lot itself (HEY! Don’t forget your National Forest Adventure Pass) was virtually empty.  We always bring our GPS unit and a map, but this “trail” was impossible to miss and equally impossible to get lost on. 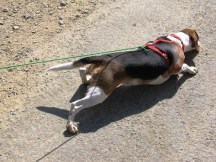 As we got out of the truck and got geared up with our backpack and drinks and set the GPS and all that good stuff, I suddenly realized that while we had brought our dog’s harness, we/I had forgotten her leash!  Driving home was not an option, and even driving back down to Azusa to find a place that would sell a leash was less than optimal.  Fortunately, I always keep a range of supplies in my emergency bag in the back of the truck, and I had some rope that I was able to modify into a leash using what my Bakersfield buddies and I used to call “redneck tech”.  Embarassing for Holly, and uncomfortable for me, but it was better than any other available option, so I guess you do what you gotta do… 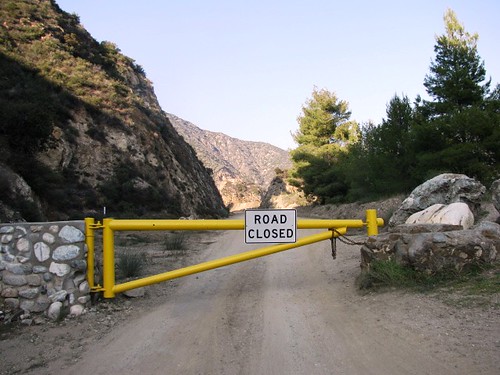 The gate at the trailhead. It was open (with tractors working behind it) when we got there, but locked when we came back.

Head through the gate (locked, or unlocked), and straight up the old dirt road.  It is two lanes wide for much of the route and provides some nice views of the Bridge to Nowhere trail and the East Fork of the San Gabriel River below and a snow-capped (when we were there) Mt. Baldy to the northeast along the way. 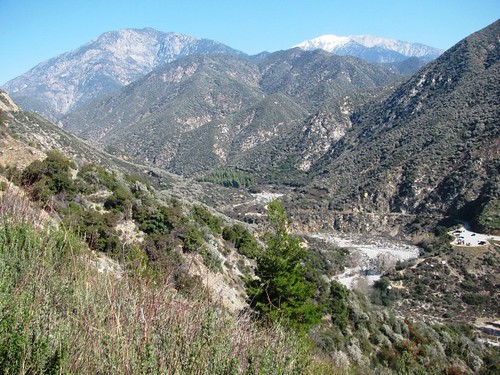 View from the trailhead. You can see the parking lot at the Bridge to Nowhere trailhead on the lower right. 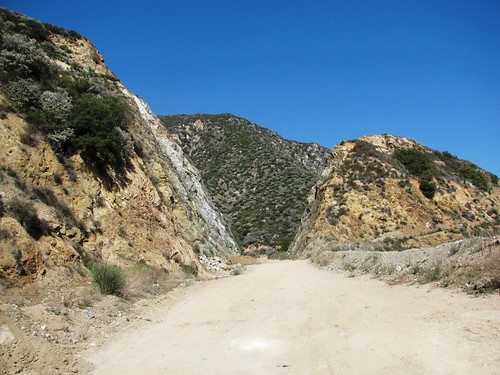 Beginning of the hike is definitely more road than trail 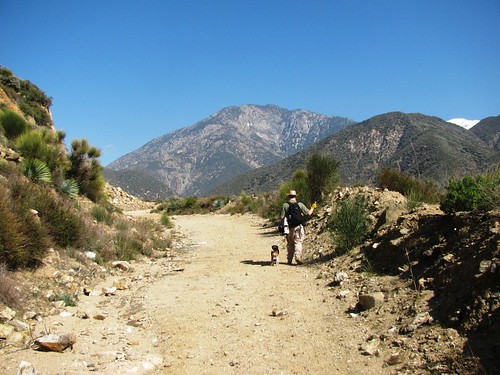 Snow-capped Mt. Baldy peaking over the mountains to the right 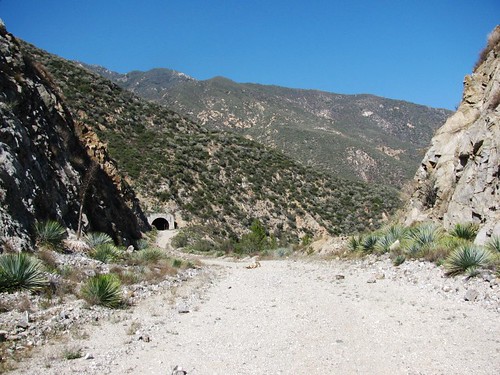 Entrance to tunnel #1 visible ahead

Just before the 2 mile mark, you’ll first get your views of both tunnels (one dead ahead and one on the hillside off to the right) and then come to the first tunnel, marked with a “1961” date in the brickwork.  This is the longer of the two tunnels, at just over 1,000 feet long.  It is decidedly dark in the middle, and you will very possibly feel more comfortable with a flashlight/headlight, but you can make it either way.  It was nice and cool in the middle of the tunnel, with drips coming down from the inside walls, and it struck us what a great shelter it would make in a hot or even a stormy day (though not necessarily in the event of nuclear attack).  Unfortunately, it had obviously also been a shelter for morons with spraypaint and beer at various times over the years, as graffiti and litter was all too present in the tunnel. 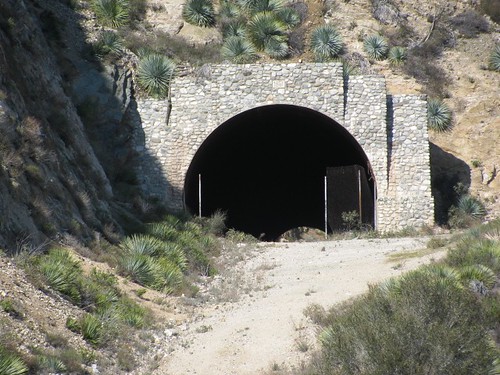 Portal to certain doom, or merely a way through the mountain? Only the brave will ever know... 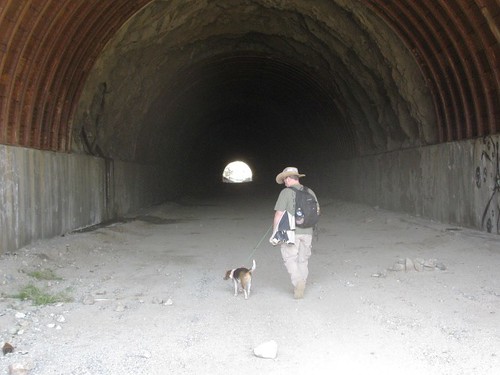 Heading into the tunnel. It's darker in the middle than it looks here. 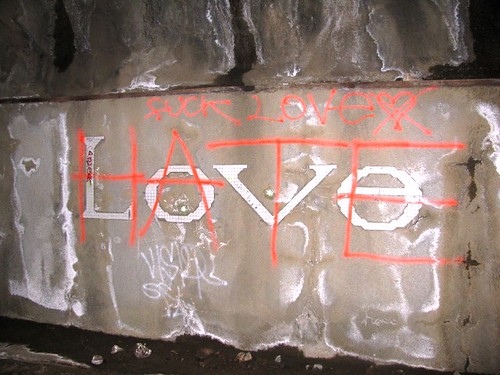 An inlaid tile "Love" inscription in the middle of the tunnel that may (or may not?) be original, defaced by idiots with a "HATE" counter-message 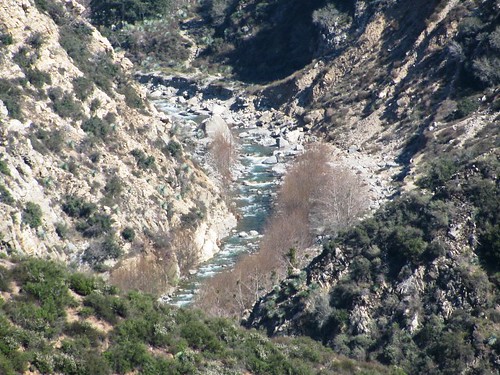 Just outside of the tunnel, a view down to the East Fork of the San Gabriel River and the trail to the Bridge to Nowhere below

Once you’ve left the first tunnel, you’ll get some more views down into the river trail below, but about 800 feet beyond the exit, you’ll come to a bend in the road where a (likely seasonal) spring flows under the trail through a culvert.  We could hear the water on the right side of the trail down the canyon, which caused us to investigate the source on the left.  Though the water didn’t flow freely on the left (it actually disappeared into the rocks and dirt just off the trail), we followed a poorly marked trail towards more water noises, and found a beautiful little waterfall and creek less than 100 feet off the main trail.  I’m not sure whether this runs all year long or not, but when it is running, it is well worth the very short diversion. 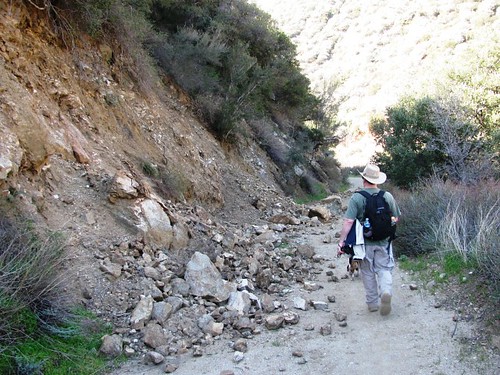 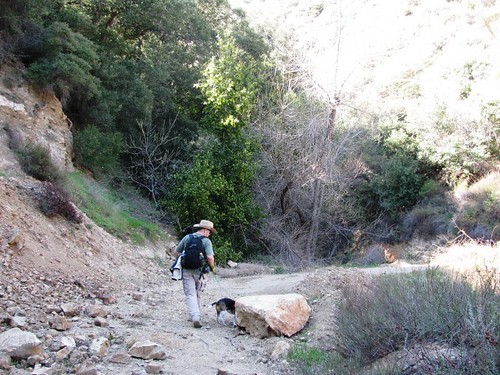 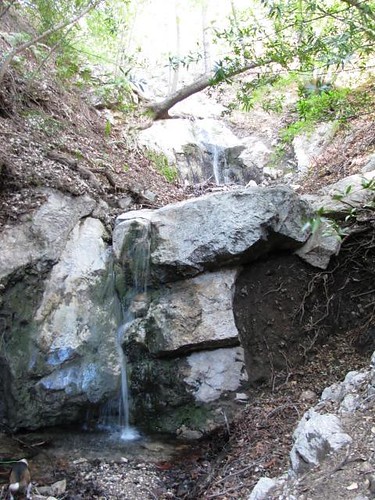 This picture really does not do the multiple layers of falls justice. Not a ton of water, but very pretty, and falls continued on up the hill above this. 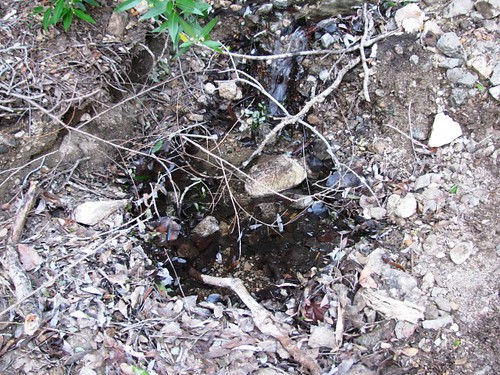 This is where the stream from the falls just disappears into the dirt, only to reappear lower in the canyon on the opposite side of the trail.

Very shortly beyond this point you’ll reach a graded clearing, that looked like it may have been a construction office, camp, or even a heli-pad at one time (there was a little culvert or walkway with the date 1965 inscribed in it), but is just a level piece of grass and dirt now.

Roughly a half mile past the spring/falls stop, you’ll come to the entrance of the second tunnel, marked with a 1964 inscription on it.  This tunnel was shorter (about 750 feet), but also might cause some to wish they had a flashlight/headlight to look for creepy-crawlys along the way. 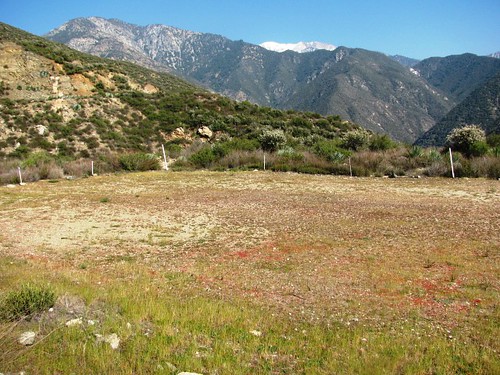 Graded pad that may have been the old construction offices or a heli-pad or both? 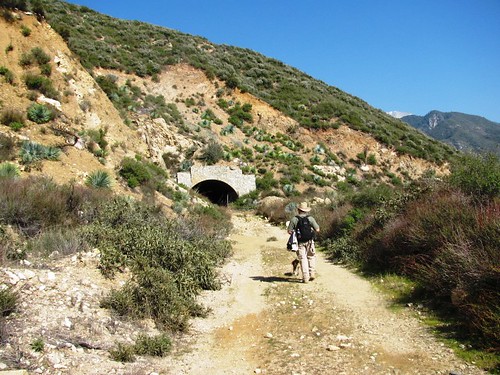 Almost immediately on the other side of the second tunnel, the wide 1-2 lane path came to an end.  We stopped to rest and take in the views of Mt. Baldy and surrounding mountains here on a ledge built into the tunnel exit, before attempting to go further on the single track trail that appeared to continue on up the canyon. 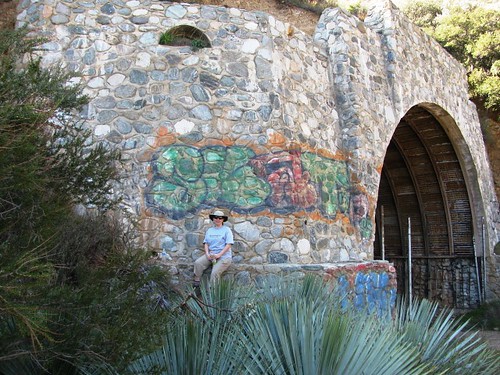 Chilling on the other side of tunnel #2. Note the lovely artwork left by more LA dirtbags 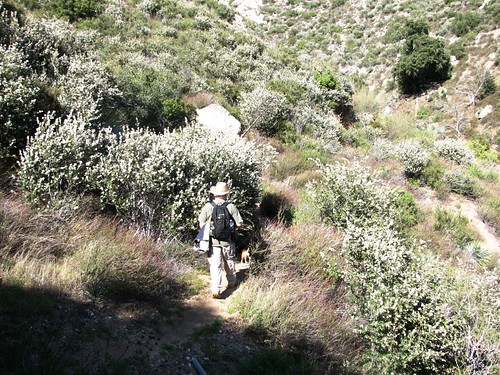 Unfortunately, within a couple hundred feet of the tunnel, the single track trail sorta disappeared, requiring one of several off-trail work-arounds that required some degree of scrambling and climbing to get to the next section of trail.  Had we had some certainty that the trail continued, or had we felt more adventurous, we might have tried it, but we decided we’d reached the 3 mile mark we were shooting for and feared that even after we breached the gap in the trail we’d just run into more missing links, so we just turned around and headed back. 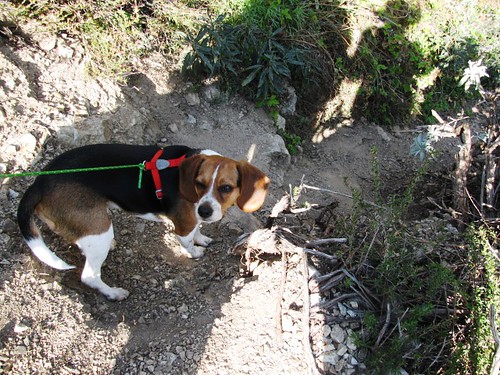 Holly is very displeased with our decision to turn around and call it a day!

In the end it was about a 6.5 mile hike with what felt like a very easy 700 foot elevation gain (probably because it was so consistent and gradual over the 3 mile trek) that took us through a couple of cool abandoned tunnels, next to a cool waterfall, and some great views of the East Fork of the San Gabriel River below.  We had hoped we’d catch a glimpse of the Bridge to Nowhere at the end of our hike, but good sense beat out bravery in the end, and we headed home instead.

View Road to Nowhere Hike in a larger map