You are here: Home / Hike Reviews / Hikes By Distance / 3 Miles or Less / A very short (but not necessarily easy) hike to Ortega Falls


Ortega Falls off the Ortega Highway

Ortega Falls was a place we’d always wanted to visit, but it falls into that category of hikes that is too short and too far to make it a destination of its own.  It is in the Cleveland National Forest less than a quarter mile off Ortega Highway (Hwy 74), but it is a stretch of the highway that is over an hour away from our home in North Orange County, and it always seemed like too much drive for too little hike.

Last week, we found an excuse to get there–nearby Bear Canyon Ridge Loop (to be blogged shortly), which was almost a seven mile long hike just barely down the road from the falls.  So when we finished that hike with some daylight left to burn, we blazed on up the highway to the dirt parking areas on either side of the road and made our way down!

From I-5, you’ll head just over 20 miles up Ortega Highway (which can be a great drive, if you haven’t done it before), and just a mile or two (and a big S-curve) past “The Candy Store” (where the parking lot for Bear Canyon Ridge Loop is), there are small dirt parking areas on both sides of the highway, with no obvious reason for them to be there.  If there is space available, park on the west side of the highway (the left, assuming you’re coming from Orange County). 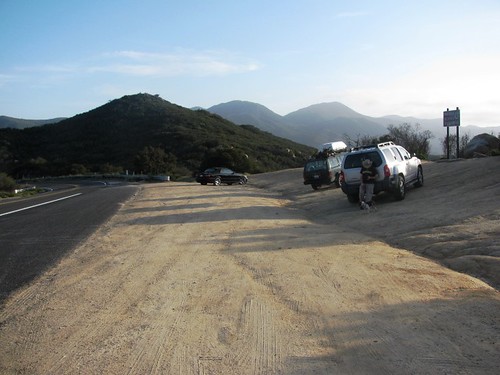 The parking area on the west side of the highway

In the parking area, there are no trailhead markers, but there is a National Forest sign that lets you know that an Adventure Pass is required to park there.  You can’t see the falls from the road, but from the parking area, you can hear the falls below and see the upper falls off to the right against the mountain side (see picture at top of page).  They look awesome from here, though we didn’t end up getting to that part of the falls. 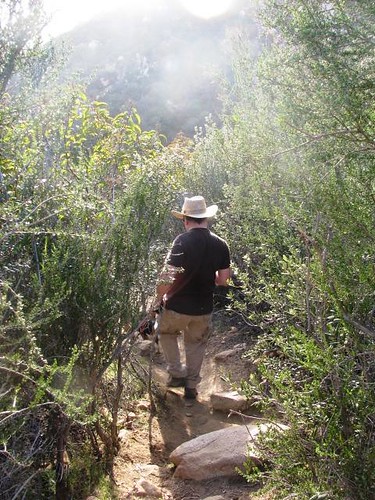 Starting down the “trail” to the lower falls

There were multiple paths that headed downhill from the parking lot, and we followed another pair of hikers down one of the paths to the left of the National Forest sign.  It was quite steep and rocky, and criss-crossed by other equally poor paths all seeming to head downhill towards the falls.  We’d heard that basically all trails lead down to the falls, and you just have to pick a path that looks like something you can manage.  We’d also heard that the leftward paths led to the lower falls, and the rightward paths led to the upper falls.  We headed left, and back-tracked a bit once or twice to find an easier route, and it did require carefully stepping and climbing down rocks along the way. 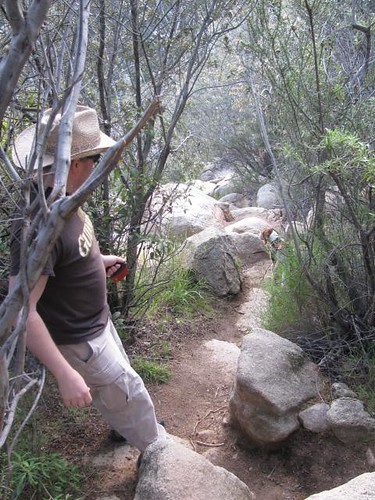 The bouldered path down 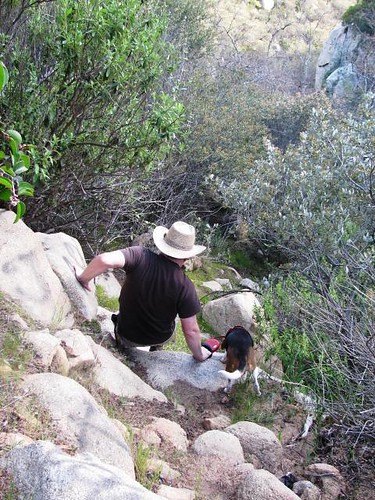 I think you can tell how steep this section is. Definitely two hands needed to do this securely. Holly is also a little uncertain as to how to get down.

It didn’t take long at all to get to the falls, and we were immediately greeted by several sets of cascades and pools in front of us.  We decided to head upstream towards the bigger set of falls we’d seen from the parking lot, and began boulder hopping our way up. 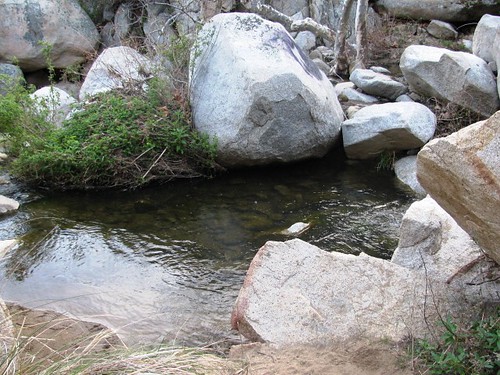 One of the first pools at the bottom of the trail 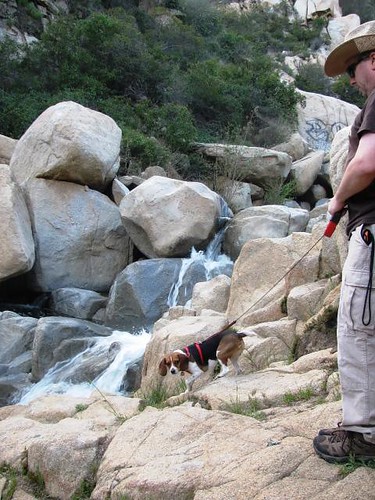 Part of the lower falls 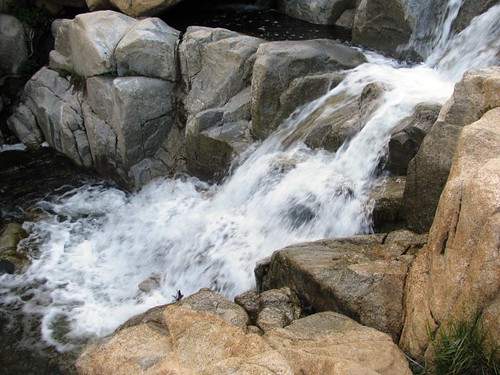 Another great piece of falls going into another pool 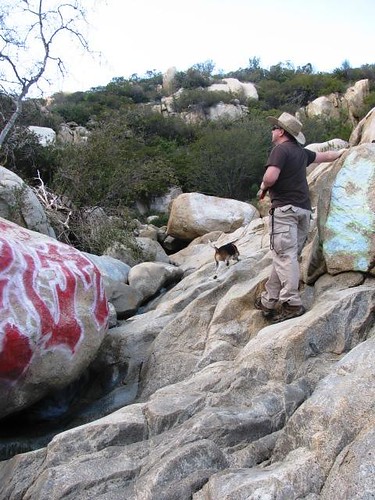 You can see the water-smoothed rocks along the falls here. You can also see some of the irritating graffiti 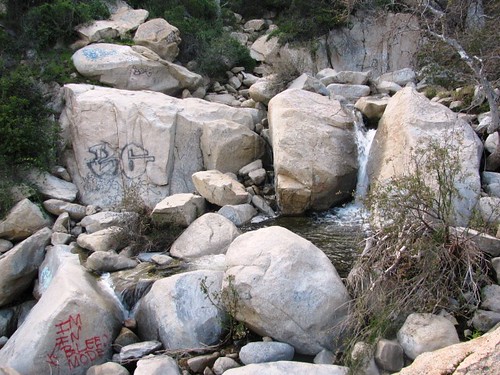 Parts of this stretch consist of stretches of smooth, almost slippery, water-worn rock faces, but I enjoy the challenge of picking the best path in places like this, and it was all along the rushing water of the San Juan Creek, with multiple sets of falls and pools along the way.  Fairly quickly we hit an area that was going to require a bit more effort and greater risk of getting wet than we were willing to accept at this point of the day, so we decided to head back uphill towards the parking lot. 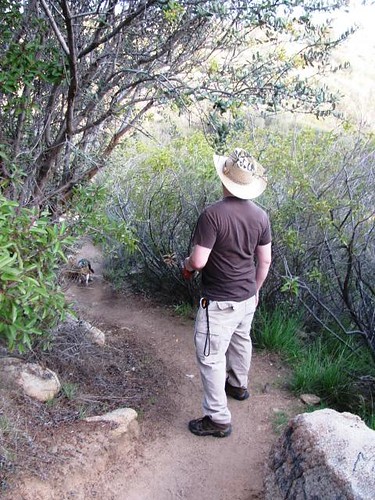 The beginning of our path back up 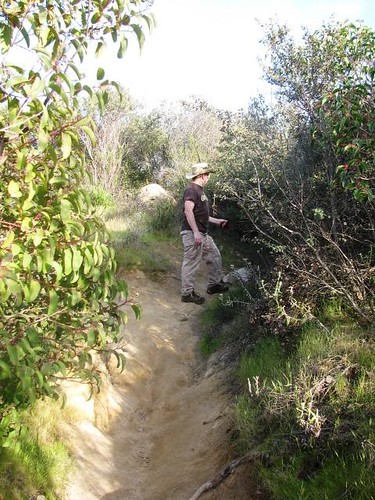 From the particular spot we chose to head back uphill, the paths were actually significantly easier to follow and hike than the path we headed downhill on.  It was actually a relatively painless and very sort climb back up to the truck, ending up on the right side of that sign at the parking lot.  I’m not sure if there is another, higher path from here up to the upper falls, but this would be my preferred route down to the falls (rather than the paths to the left that we took down), and from here, I would take my time working our way up and down the boulders and rock faces at our own leisure. 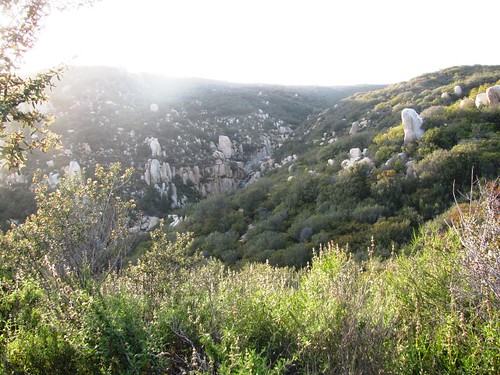 We were saddened by the amount of graffiti on the rocks down below by the falls, but have come to expect that when there are waterfalls easily accessible from the road.  It seems that the easier it is to get somewhere cool, the likelier it is that idiots have defaced it.  I haven’t done any sociological studies, but our research indicates that the people willing to put in a little work to get to scenic areas are less likely to be jerks than the ones who aren’t.

On a hot day, I could totally see wearing hiking sandals and swimsuits and spending the day there on the creek with the kids cooling off in the pools, playing in the falls, and working our way up the creek to the upper falls that we didn’t get to.  Unfortunately, based on the graffiti and garbage we did see, it probably would mean sharing the pools and falls with a bunch of clueless idiots that might make it difficult to truly appreciate the natural beauty of God’s creation without wishing death on some of his other creations.