You are here: Home / Hike Reviews / Hikes By Distance / 5.1 to 7 Miles / Bear Canyon-Bear Ridge Loop: A nice hike on a nice day

On a recent beautiful Southern California late winter day (March 12, 2011, for the record), we decided to try to hit a hike that would be miserable in the summer, but wouldn’t suffer from being too early for wildflowers, either (because it isn’t really a wildflower area).  We picked Bear Canyon/Bear Ridge Loop off Ortega Highway in the Cleveland National Forest.  Turned out we made the right choice.  I really can’t imagine a better day for this sort of hike, when it was spring green along the trail, but neither too hot nor to cold. 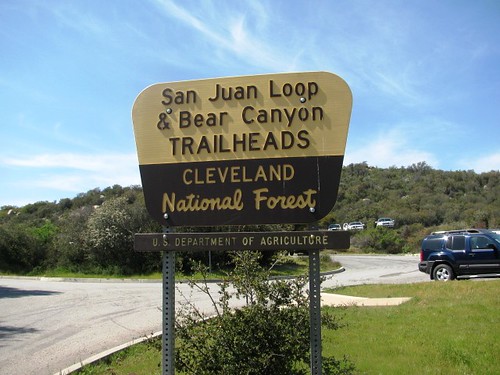 Not a large parking area, but we found plenty of spaces on a March afternoon--do you have your Adventure Pass?

The Bear Canyon Ridge Loop Hike trailhead is about 20 miles east from I-5 along Ortega Highway, immediately south of “The Candy Store” (which had very recently re-opened after being briefly closed), and across the street from a Cleveland National Forest parking lot that serves both this hike and the San Juan Loop Trail.  After you hang your Adventure Pass from your rear view mirror, you can get on your way. 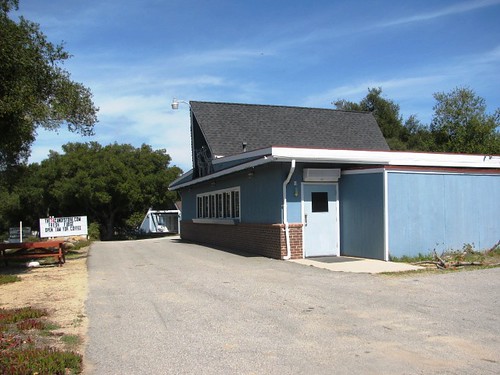 The Candy Store itself claims it will sell Adventure Passes and hiking and camping supplies for those who have not come sufficiently prepared, but we already were  prepared (arguably over-prepared), as always…  Regardless, you need to cross the street from the parking lot to the Candy Store and then head about 200 feet south along the highway to find the actual trailhead.  There is a sign there to  know you are actually where you are supposed to be, which is nice. 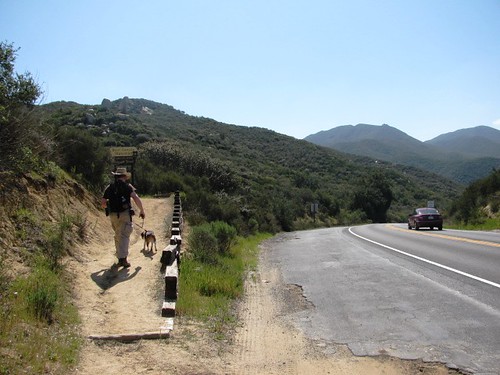 The actual trailhead, right along the Ortega Highway, just down from the Candy Store 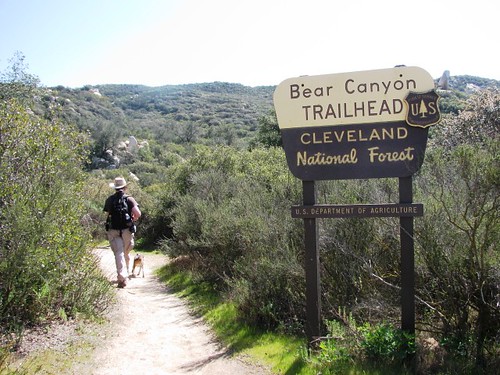 Now we're on the right track...

Another 100 yards or so from there is a sign with maps, informational signs, and a post with a “Wilderness Area” sign-in, where they ask that you sign in your name, zip code, the size of your party, and where you are headed.  They say it is to make sure nobody is lost and to determine the uses of the wilderness area, but since they don’t ask you to sign back out, I think it is mostly about the latter than the former. 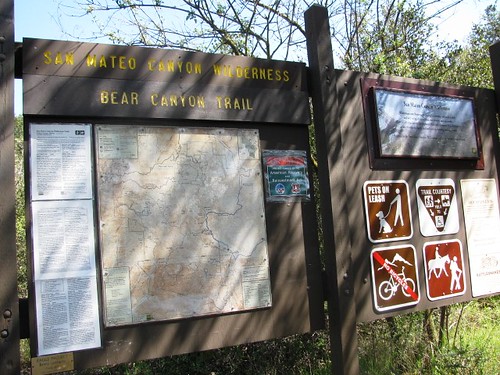 Almost immediately, we come to this San Mateo Canyon Wilderness sign and map, which makes you think you're entering it, but apparently not quite yet. 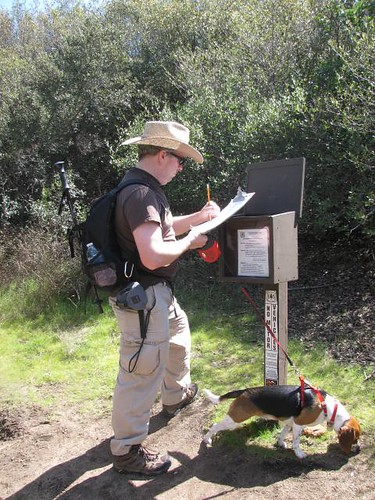 The first stretch of trail is very exposed, and would likely be very hot in summer.  The brush was high and green while we were there, and it very quickly got away from the sounds of the road below.  That early March day we were there, there was a small trickle of a stream along the way, but I’m not sure how much of the year this actually runs. 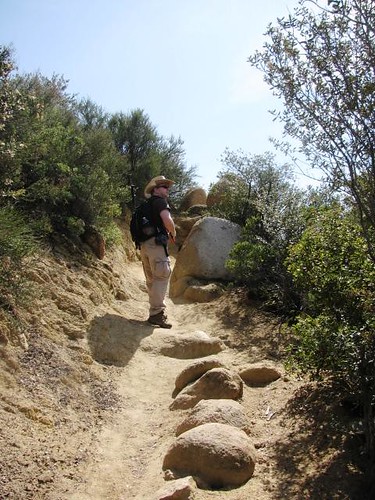 Up the exposed and rocky trail 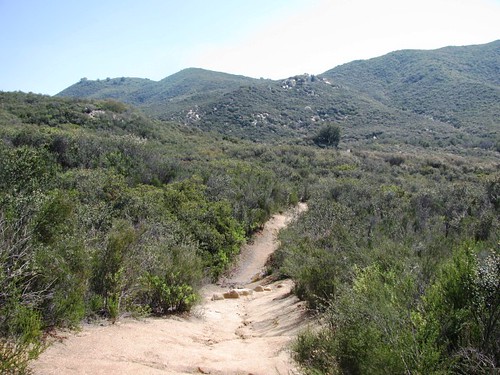 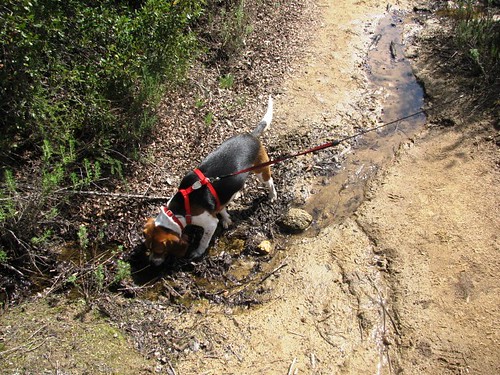 A trickle crosses the trail on this particular day. Don't count on it later in the season...

About a mile in, you will come to what appears to be a legitimate water/creek crossing, which may run for at least much of the year.  On this particular day, it was running very nicely, and our dog enjoyed the cooling water for a moment before we continued on.  Immediately on the other side of the creek was the official entrance to the San Mateo Canyon Wilderness Area.  Fortunately, this is the kind of wilderness area that allows dogs, so we moved on up the trail. 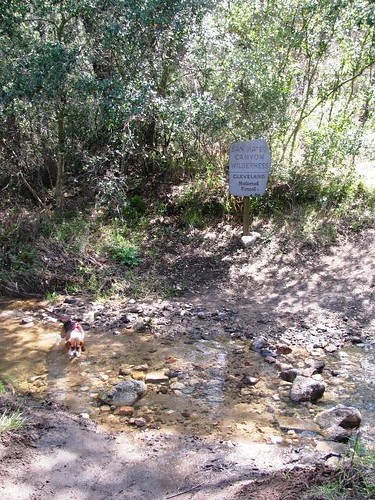 A creek crossing right before the "official" entrance to the Wilderness Area. This creek seems like it might actually flow for at least decent portions of the year 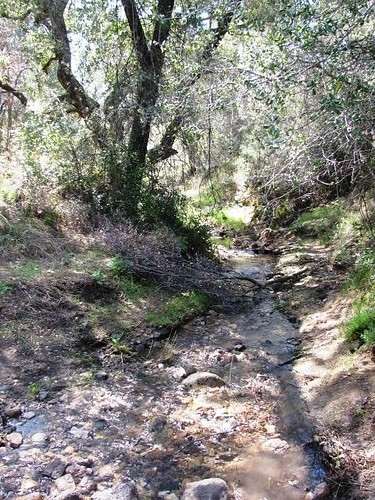 A look down the creek from the crossing 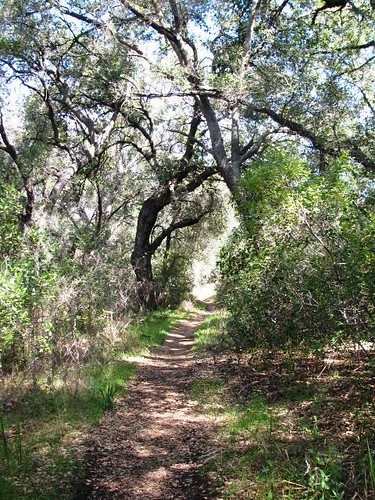 Now entering a shadier part of the trail 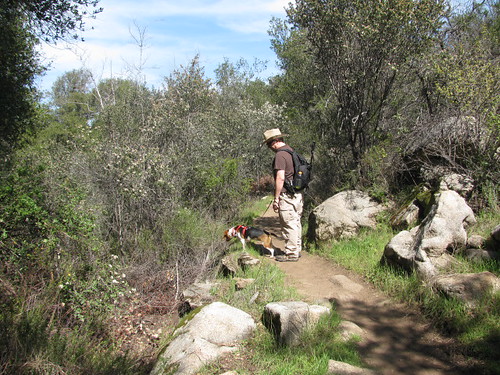 This starts a more shaded area of the trail.  775 feet later (according to our GPS), you will come to a junction with Morgan Trail, which the sign says you could take 4.3 miles to the South Main Divide Road.  We stayed right, headed towards Four Corners (2.1 miles), where we would hit the second part of our loop. 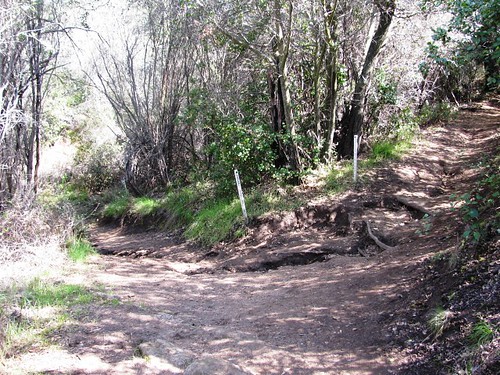 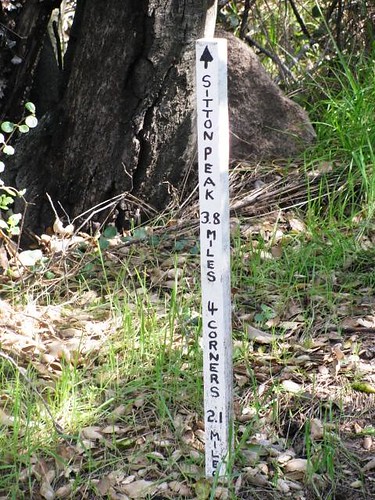 This next strip had a mix of shaded and exposed terrain, but continued the nearly unrelenting climb that had started at the parking area.  Never too steep, but very little flat or downhill terrain to break up the climb. 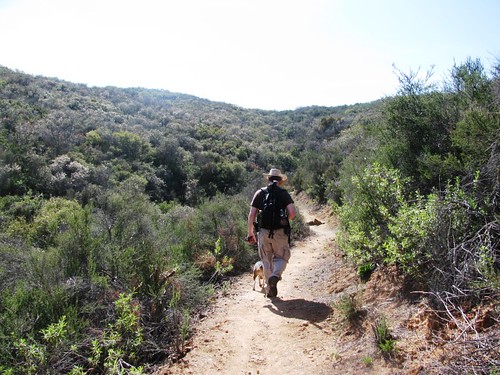 Another stretch of exposed trail

Roughly a mile from the Morgan Trail Junction was another crossroads. Our written narrative from Trails.com claimed that it was a well-marked junction, but while it was obvious that we were at a junction, on this day there was no signage.  Fortunately, the hiking map and our GPS unit made it pretty clear that we should turn right along the former Verdugo Truck Trail to get to Four Corners, and that we would come back by way of the single track trail directly in front of us. 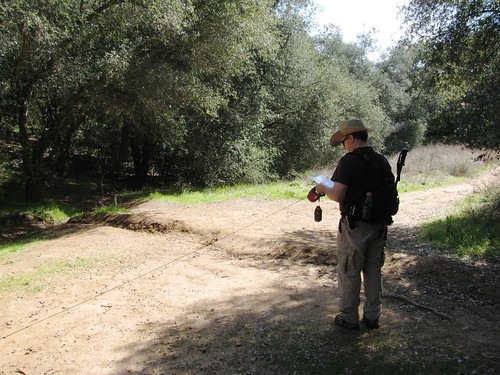 We continued mostly southward, along or near a creek (Pigeon Spring?) that had an interesting small brick structure that the Trails.com structure described as a “horse trough”, but the lid was locked.  From here, there was a trickle of water that came right down the middle of the trail for a stretch (that again, is likely dry much of the year) as we headed uphill towards Four Corners. 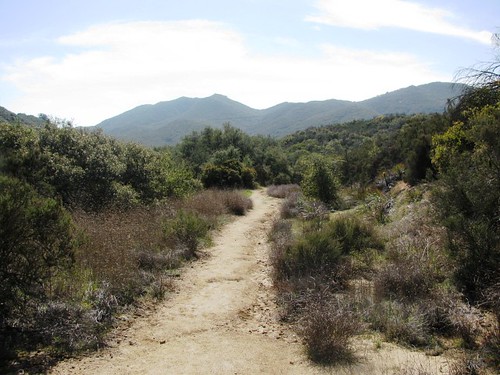 The trail to 4 Corners 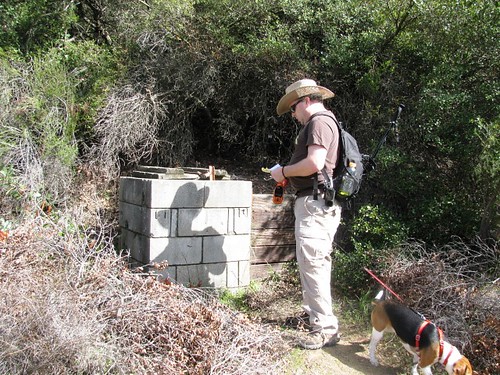 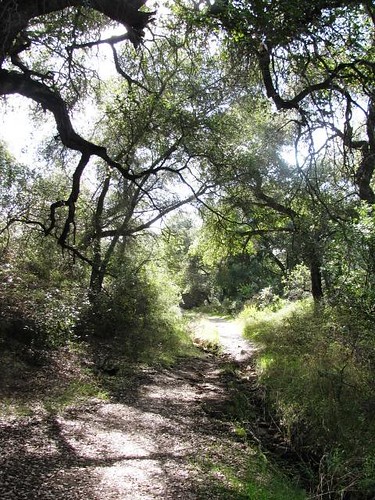 The shaded trail along Pigeon Spring 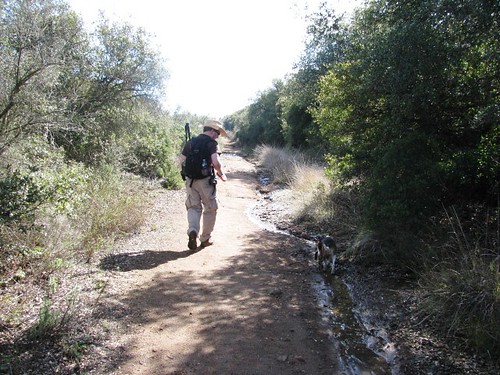 Another trickle runs down the middle of this section of trail. Probably very seasonal

About a half mile from Pigeon Spring and 3 miles from the parking lot, you’ll hit the very obvious trail junction at Four Corners, where five trails intersect (5 trails at 4 Corners?  I don’t know, either).  All five trails are marked very clearly here, including the route up to Sitton Peak (another 1.7 miles and about 1,100 feet in elevation gain).  Looked like a nice (though exposed) picnic or rest spot, complete with a few sitting rocks, but we were ready to complete our loop and head back. 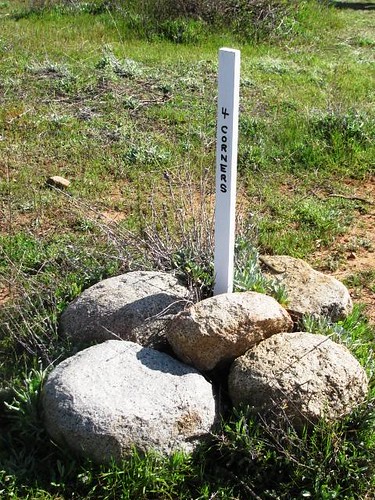 The post marking the 4 Corners Junction, which is very hard to miss 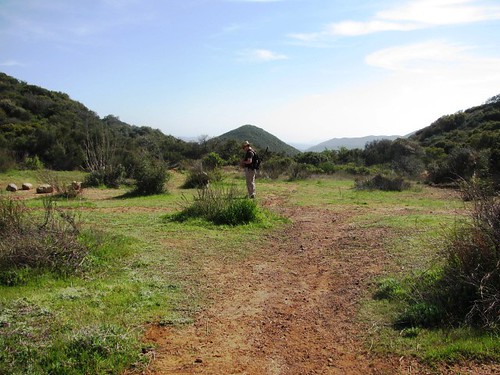 The large open space at 4 Corners, with trailheads galore 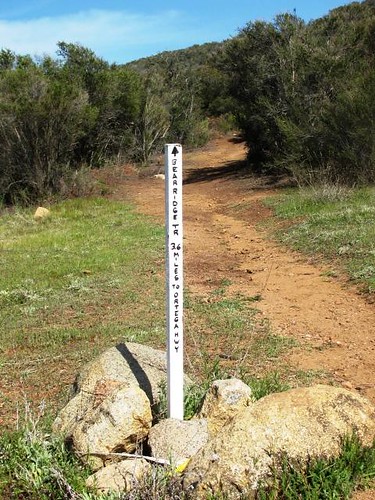 The Bear Ridge Loop picks up almost directly behind you to the left as you emerge from the Bear Canyon Trail.  From here, the trail continues to head upwards a little bit further, along a mostly single track, largely exposed, red clay trail, shortly hitting the high point of the entire hike, at 2,835 feet.  From there, it follows along the ridge, with some nice views all around. 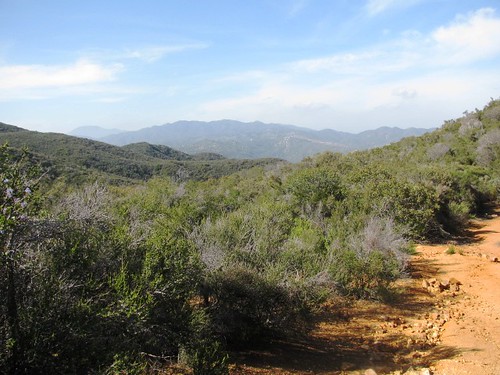 A view northwest from the Bear Ridge Trail, near the high point of the track 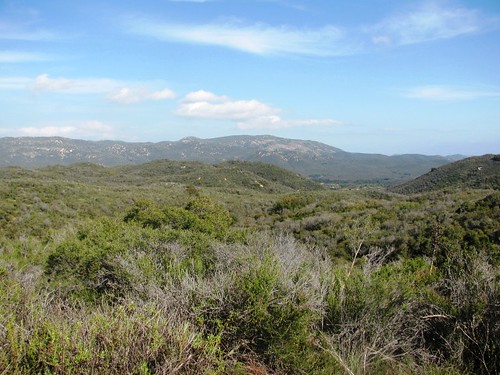 A southeastern view from the high point on the trail 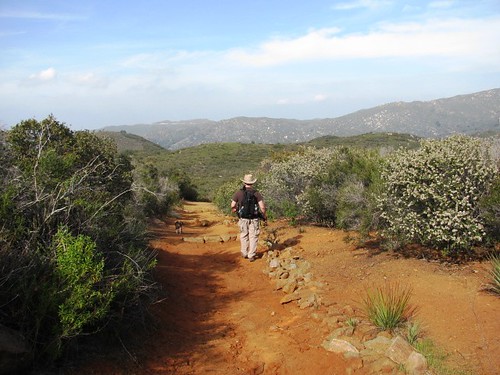 Starting to head back downhill on the red clay trail

At just under a mile and a half from Four Corners, the trail meets back up at the Verdugo Truck Trail Junction.  If you continue straight ahead, you will hook back up with the trail you came up on, which you can then follow the last two miles back to the parking lot–nearly all downhill, which we did at an easy rapid clip. 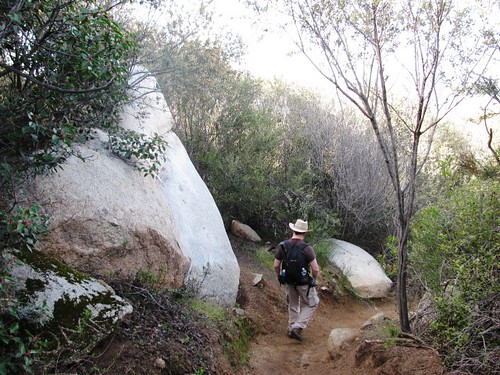 Heading back downtrail towards the end 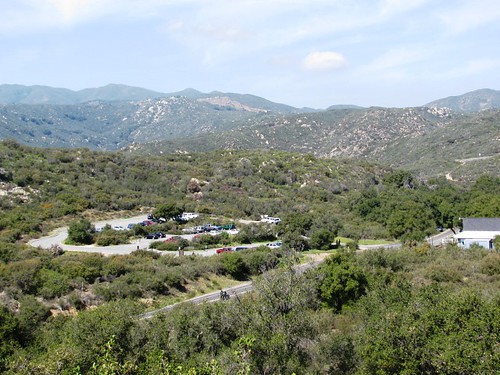 Looking down onto the parking lot on the left and the candy store on the right, on the final piece of trail home

In summary, it wasn’t the most beautiful hike we’ve done, there weren’t really any wildflowers or waterfalls, or even spectacular views.  But it had a nice mix of terrain and habitats, brush, chapparal and trees, and on a cool early spring/late winter day, it was a very pleasant hike and a great day to be out. Add it to Ortega Falls just up the road, and it can be even better!