You are here: Home / Hike Reviews / Hikes By Distance / 3.1 to 5 Miles / Hiking to Sturtevant Falls in the Angeles National Forest

The day before Super Bowl, we finally took our son Hunter hiking to Sturtevant Falls in the Angeles National Forest.  I say “finally” because Jeff and I hiked a portion of this trail last summer for our Winter Creek Trail Loop hike in Big Santa Anita Canyon.  We knew Sturtevant Falls was supposed to be very kid-friendly, and we wanted to wait until after a full winter rain season to visit. 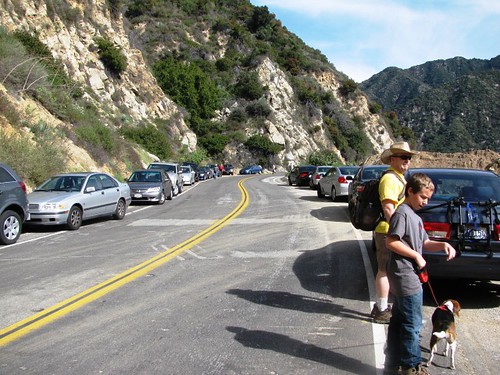 Chantry Flats was packed! We had to park 1 mile away from our trailhead…again..

Remembering the horrendous crowds at Chantry Flat Recreation Area (“Chantry Flats”) from our previous hike, we foolishly thought early February would still be a bit too early in the year for the masses to be out hiking, and that most people would opt to stay at home on Super Bowl weekend.  We were wrong. 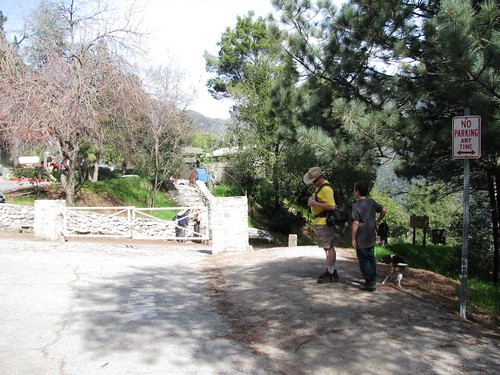 Chantry Flats was at least as crowded, if not more so, than last time.  We again had to park a full mile away from the trailhead…and unlike last time, we actually saw the rangers giving out tickets to cars illegally parked in clearly marked “No Parking” areas or not displaying a Forest Service Adventure Pass.

If you haven’t read our previous post on Big Santa Anita Canyon, or aren’t familiar with the area, Chantry “Flats” is a highly popular spot in the San Gabriel Mountains, which includes a big public picnic area, a historic pack house, and access to a handful of trails — including the eastern trailhead for the 28.5 mile Gabrieleno Trail (not listed on the Greene Adventures hiking wishlist…yet). 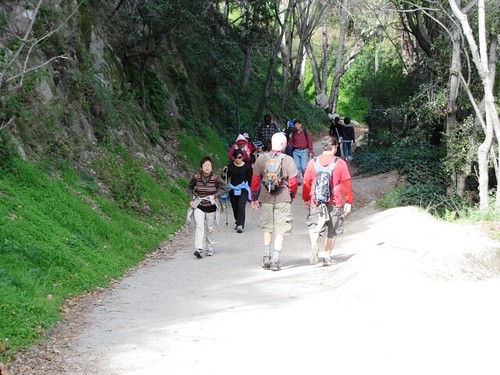 The official trailhead (which is also the start of the Gabrieleno Trail) is 1 mile up from where we parked, and is marked by a gate blocking vehicle access to a paved road that descends into the canyon.  The trail is very crowded, and it stays crowded the entire way — Sturtevant Falls is the most popular hike in the area.  Note: the mileage we list for this hike includes the extra mileage to and from our vehicle. 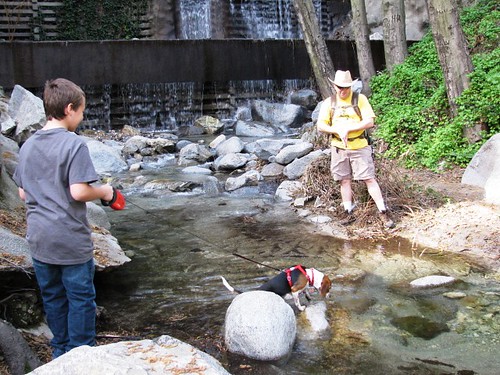 We opted to make the first creek crossing by hopping rocks instead of taking the wooden bridge — much more fun for Holly.

The paved section of trail ends at a wooden bridge that spans the creek.  Our Beagle pup Holly isn’t too fond of wooden bridges, so we opted to cross the creek by hopping rocks at the base of the nearby cement check damn. 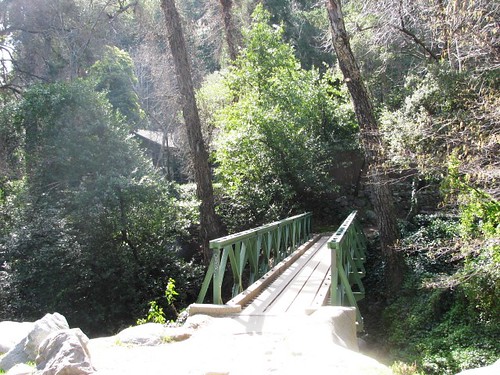 Although most people opt to take the bridge to cross the creek.

The foot bridge dumps you into the busiest intersection in the canyon. This trail junction marks the site of Roberts Camp (1912 – 1931), one of many trail camps that sprang up in the San Gabriels during Southern California’s “Great Hiking Era” — which took place between the real estate boom of the late 1880s and the great flood of 1938.1

The camp, once a major destination resort in the San Gabriel mountains, was so popular that it housed a branch of the Los Angeles Public Library as well as a post office.  The abandoned lodge was destroyed in the big storm of 1938. 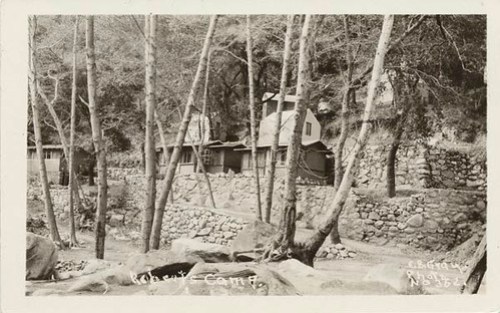 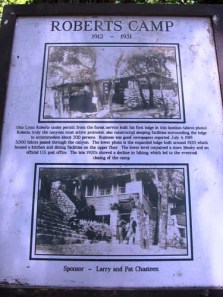 This historical marker at the junction tells the story of Roberts Camp. 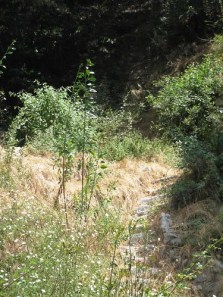 All that remains is the stone steps, being reclaimed by nature. 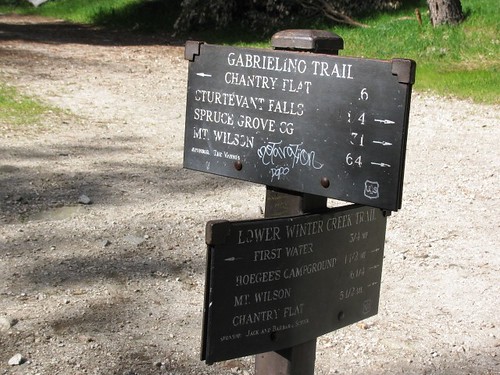 From this trail junction, you can access most of the major trail systems within Big Santa Anita Canyon, including Mount Wilson.

For history buffs like me, the hike to Sturtevant Falls is a pure treat.  In addition to the sheer beauty of the area, Big Santa Anita Canyon, and the trail from Chantry Flats is packed with with history.  The 50-foot waterfall is named after canyon pioneer William M. Sturtevant, who arrived in California from Colorado in the early 1880s.1 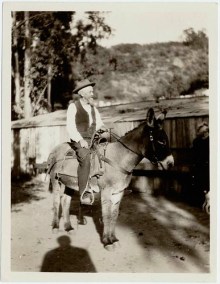 Sturtevant operated the Mount Wilson stables, and is credited with blazing and maintaining the original trail system extending from Sierra Madre back through Big Santa Anita Canyon.1, 2, 3

Sturtevant was the founding proprietor of nearby Sturtevant’s Camp, which opened in 1892, 1893 or 1898 (depending which account you read).  The hike-in camp is still standing, and was until recently still in operation.  Its website states the camp is temporarily closed, and news articles indicate it is in danger of being permanently closed.  I left a voicemail at the reservation line last week, but haven’t received a return call from anyone. 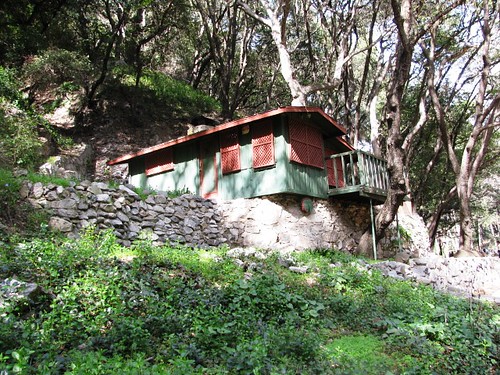 Like the cabins along the Lower and Upper Winter Creek Trails, the trail to Sturtevant Falls is dotted with historic rustic cabins that are privately owned recreational residences, on land leased through the Forest Service. 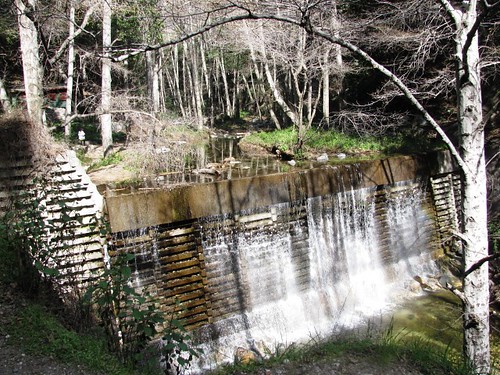 One of many concrete check damns that line the canyon floor, to prevent a repeat of the destruction wrought by the flood of 1938. 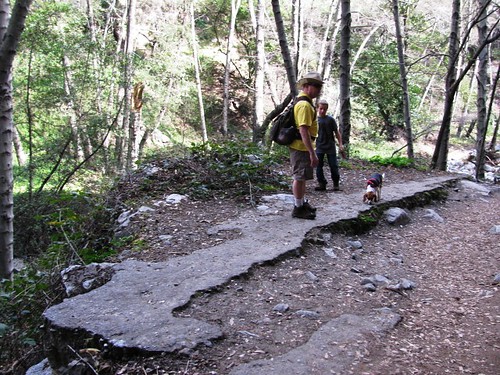 Evidence of the paved road that once reached back towards the falls. 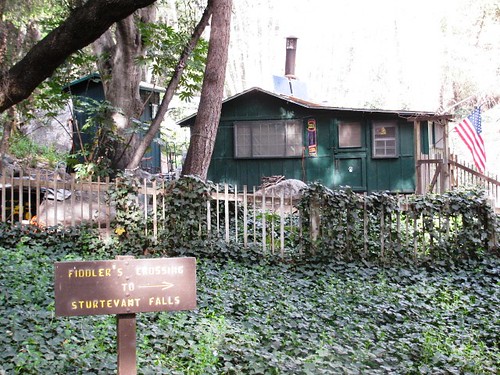 Here at Fiddler’s Crossing the falls trail veers off of the main trail system.

The trail from Roberts Camp to Sturtevant Falls runs along the creek the entire way, and is very easy to follow.  It is quite shady and protected most of the way, although there are a couple spots that open up to the exposed sun.  And after winter and spring rains, do be prepared to get your boots a bit wet from the creek crossings. 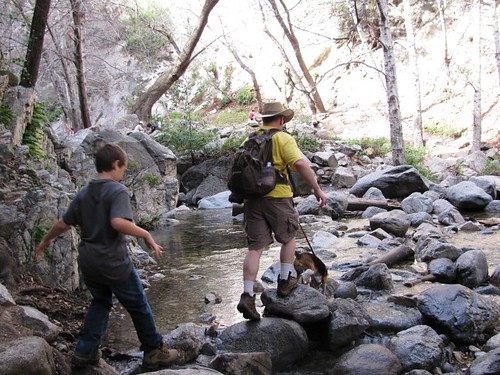 The last stretch to the falls is all boulder hopping and creek crossings. 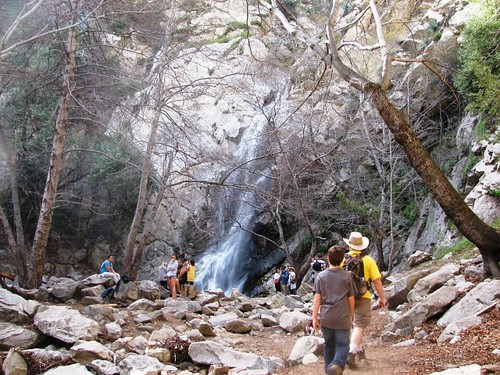 We weren’t surprised to find the falls really crowded.

There is a nice wide flat “beach” at the base of the falls that was crowded, even in early February, with people sitting and enjoying the beautiful 50-foot waterfall and the cool spray it generated. We were able to wander across to the far side of the falls to enjoy our picnic on a little more secluded area of beach. But, I have no doubt that on a warm sunny weekend, the entire beach — and especially the natural pool — gets absolutely packed with hikers.

After taking in the falls, retrace your route to return to the Chantry Flat parking lot.  And be sure to stop by the historic pack station to grab a grilled burger or a cold ice cream. 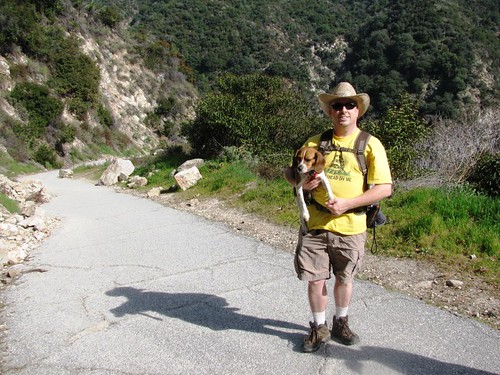 Unfortunately, Jeff had to carry Holly the last portion of the hike because she got a tick between her toes that was irritating one of her paws and causing her pain.

Elevation Profile: click through to view a larger image.