I guess you could say Weir Canyon Wilderness Park is hidden in plain sight.  We had stumbled across a reference to a Weir Canyon Trail on Trails.com, that appeared to connect to another hike within Santiago Oaks Regional Park, which is one of our favorites.  But we were unable to find any reference to Weir Canyon Wilderness Park on the OCParks webpage, and the Santiago Oaks map available at the time was less than clear on whether there was actually a trail there or not.

We have since found reference to a strategic plan for the park, and the updated Santiago Oaks trail map shows more of the Weir trail than it once did (though it inexplicably continues to not show Robber’s Roost and the trails that connect to it immediately outside the park borders), but there is still nothing at OCParks about the existence of Weir Canyon Wilderness Park!

It was very sneaky the way they have hidden this park between a popular regional park and several suburban neighborhoods, but as rugged explorers and conquerors of uncharted territories, we decided it was up to us to investigate this mystery park and share it with y’all. 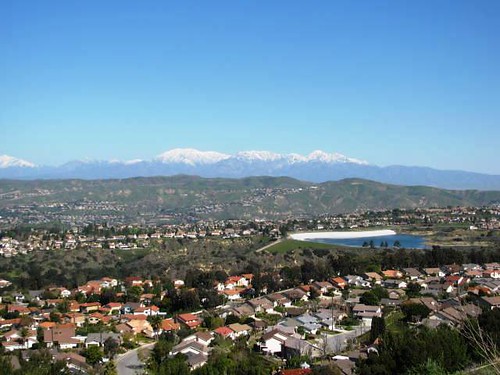 Since we had hiked up to Robber’s Roost several times before (See Inner Loop Hike post here), we figured we would start at Anaheim Hills Elementary School and at a minimum get to the end of Santiago Oaks’ border, and hope that the two parks actually connected.  On a weekend, it is very easy to park at the school and find the trail picking up from the east side of the school and heading nearly straight up the hill behind it.

The first part of the trail from the school parking lot is quite steep, gaining about 250 feet in 1/3 mile as you enter the park (no fee for the park if you enter from here) and head left at the T-intersection towards the top of the hill.  While Robber’s Roost isn’t your ultimate destination on this hike, be sure to take a moment to catch your breath and the occasional breath-taking views from this great lookout spot over Orange County (it is precisely this view that allegedly is behind the name of the rock, as bad guys in the past would keep watch for the good guys coming after them). 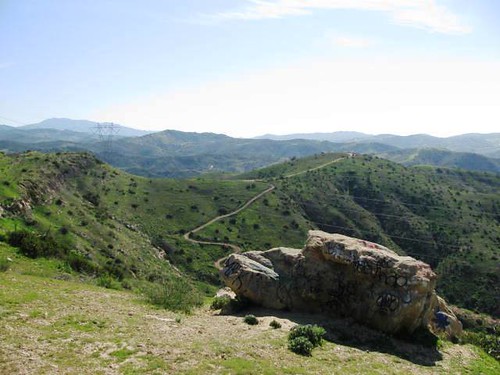 A look from Robber’s Roost into Santiago Oaks Park

The center of Santiago Oaks park is below you to the southwest, but you want to head east, on the back side of the big transmission towers.  Here you’ll see an entrance sign into the park, just before the single track trail heads down hill, in a relatively steep descent another 300 feet or so.  This is a good time to point out that though the lowest elevation of the hike was 827 feet above sea level, and the maximum elevation is 1238, reflected in the 411 feet of elevation change noted above, you will make this climb several times, for a total climb in this hike of probably over 1,000 vertical feet.  The elevation profile snapshot below shows this quite clearly (click through for a clearer view).

Pretty quickly after you start down the hill, you’ll see the sign for the Anaheim Hills Trail, still within Santiago Oaks Park.  Take this spur to the left, which will take you further downhill and eastward, towards the Weir Wilderness Park.  Parts of this trail were quite steep and quite barren, but not anywhere close to impassable.  We passed several geocaching locations along the way to the other park, but were silently regretting all the elevation we were losing along the way, knowing we’d eventually have to climb back up later. 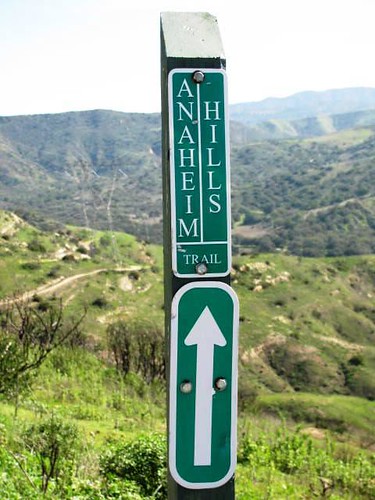 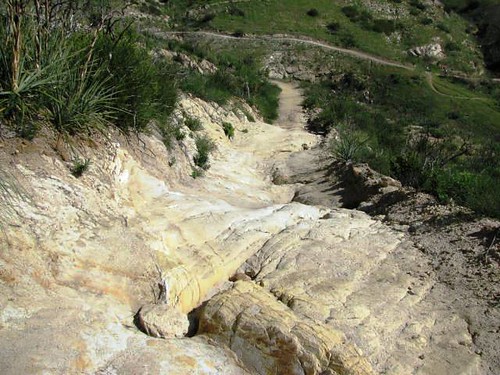 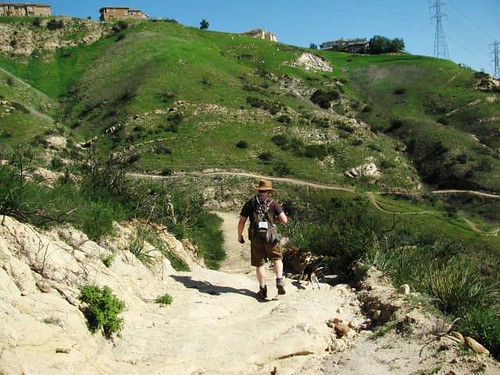 Yup. Further downhill. Try not to think about the fact you’re going to have to re-climb this at the end of the hike.

Geocache! Apparently this particular one had (barely) survived one of the wildfires in this area.

For a park that was persona non grata on the interwebs, it was really remarkably well-signed.  We saw quite a few signposts along the way, and there was an assemblage of signs at what appeared to be the actual entrance to the park, right there at the end of  Hidden Canyon Road, where the Trails.com trail guide had suggested we start, at the beginning of the Weir Canyon Trail.  We stayed to the right, avoiding crossing the well-posted “KEEP THE HELL OUT” Irvine Company signs even further to the right, along the property that will someday allegedly have more public access than they do today.

I’m sure it isn’t always this muddy, but this is the trail sign you’re looking for

From the lowest part of the hike right about at the entrance to the park, it was a long, slow climb through the loop up to the highpoint of the hike at the top, with a really nice view of Big Bear, Mt. Baldy, Chino Hills State Park, and the Weir Canyon Wilderness Loop we had just hiked below.  The trail brings you right up against some backyards in Anaheim Hills, but there was certainly more wilderness feel than suburban feel, so it didn’t bother us too much.  It was a hot day, but the wildflowers were just starting to peak, and we intend to go back later in the Spring some time to catch the wildflowers at their peak.

Heading down the south end of the loop

Holly taking a moment to cool off in the tall green grass. I’m going to go out on a limb and guess that it isn’t cool and green for much of the year…

OMG! A warning sign about crossing the creek! Must be for our own safety, to keep us from being swept away in the rapid current!

Or maybe not. On this particular February day, the “creek” was little more than a trickle, and clearly we didn’t do a very good job of keeping out of it (I’d like to apologize for how emaciated Holly looks here–I swear our vet said this was normal)

Hey–a poppy! Had we gone a month or two later, we should have seen a lot more of our state flower, but in February, not so much…

More of the lower loop. Still no sign of suburbia!

SNAKE!!!!!1! Stumbled upon this non-venomous gopher snake (I think) on the trail. I encouraged him to get off the trail for his own safety. I’m certain there are plenty of rattlers in this area and didn’t want him to be mistaken for one and killed by some ignoramus.

At the top of the loop, the Trails.com guide had us heading down to Avenida de Santiago, and from there, returning to Hidden Canyon Road, from where we could catch the trail back to Santiago Oaks.  We saw a narrow single track trail (much narrower than any we had hiked so far) that appeared to head through the tall grasses back towards the same trail, but weren’t confident that it actually connected where we wanted to go, so we chickened out and took the street route instead.

This single track trail appears to head back to Santiago Oaks, but we just weren’t sure, because our trail guide didn’t reference it (helpful hint: it does)

Holly takes advantage of our uncertainty and romps and rolls in the tall, cool, green grass again (check for ticks on your dog! She didn’t get any on this trip, but only out of sheer dumb luck)

Walking down towards Avenida de Santiago, as our trail guide suggested

Apparently this is another point of entry for the park at Avenida de Santiago. Here are some rules, in case you are a rule-following type of person. Note rule 2-5-39(a), which allows leashed dogs.

Holly takes one last opportunity to jump into some lush greenery along the road back to the trailhead. Was it an abnormally hot SoCal February day? Yes, it was.

Walk down Hidden Canyon Road back to the Anaheim Hills Trailhead and the beginning of the Weir Canyon Loop. You can see the cars parked at the end of the road, where you might park if you only want to do the Weir Loop

Later, when we hit the trail connection (and even later when we looked at aerial maps), it was clear that we could have followed that trail down to the junction with the Anaheim Hills Trail, which we will do next time we hike this thing.

Unfortunately, this was now the  low point of the trail again, which meant one last, hot, mile long climb back up to Robber’s Roost, almost 500 feet above us.  We actually had a clearer view of Orange County on the way back, than we did on the way out, so the final climb wasn’t totally without reward, but we definitely had wished we had attempted this hike on a cooler day than we did, and preferably during wildflower season.

Steep, hot, barren climb back up the trail near the end of our 8 mile hike? Yes, please!

Final look out west from Robber’s Roost on the way back. That’s Catalina and the ocean in the distance, and Santiago Oaks Park in the foreground

So in the end, if you take this hike from the school, it is a pretty serious hike with some real elevation and some real (8 mile) mileage.  If you take the “cheater route” and park at Hidden Canyon, it is only about 4 miles and about half the total elevation as well.  I’d still recommend trying to hit it at wildflower season, but if you’re just looking for a good exercise hike that isn’t a long way out of town, this may be a decent choice.