On our first camping trip to Anza Borrego State Park, we had a couple of hikes circled to try to do.  Our priority was the Palm Canyon hike, which was listed as the most popular hike in the Park, so we did that on our first full day there.  On the second day, we weren’t looking for anything particularly lengthy, but did want to see some cool stuff, so we lined up a few short hikes to some historical sites and decided to see how many we could get through before we tired out or ran out of daylight.

Happily, we managed to make all three of them.  After packing up camp and heading south, we first hit the Yaqui Well Nature Trail across from the Tamarisk Grove Campground.  From there it wasn’t far to Blair Valley and a dirt road that led to two other historical sites–The Morteros, and the Pictograph Trail.  The Morteros was really little more than an interesting stop off the parking area, as described in our write-up.

Even the trip to the pictographs was listed as only about a mile round trip, but we had read that if you continued up the trail an additional half mile or so, you’d be rewarded with a great view of Anza Borrego out Smuggler’s Canyon–and this was indeed the best part of the three short hikes we did that day. 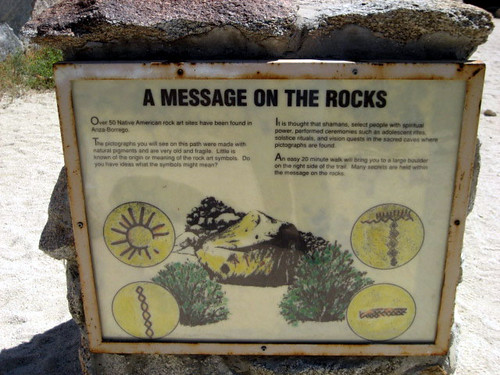 The parking area was located about 5 miles from the main road (S2) along a dirt road that was relatively well maintained for all but the lowest profile (or most expensive) cars or the biggest RVs.  It was only a short distance past the Morteros Trail, and the parking area was fairly obvious at what I recall was the end of the road.  Adjacent to the parking area at the trail head was an interpretive sign that described the pictographs.  Nobody is exactly sure who (other than the Kumeyaay Indians, which isn’t very specific) drew them or what they meant, and even their age has been described as between 200 and 2000 years ago (which isn’t exactly precise, imho). 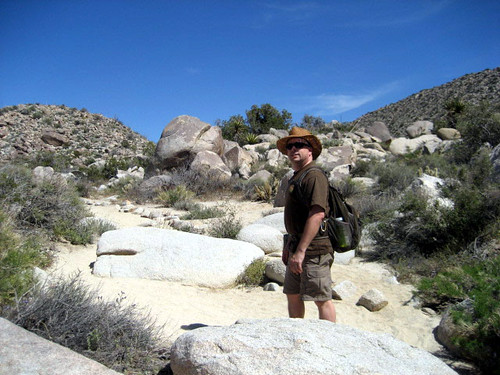 The moderately uphill hike from the parking lot to the pictographs. 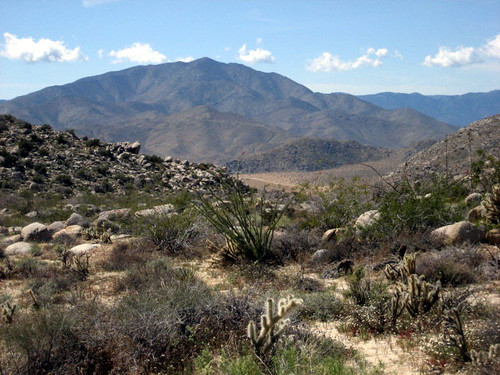 Highest point of the hike, looking back towards Blair Valley and the parking area. 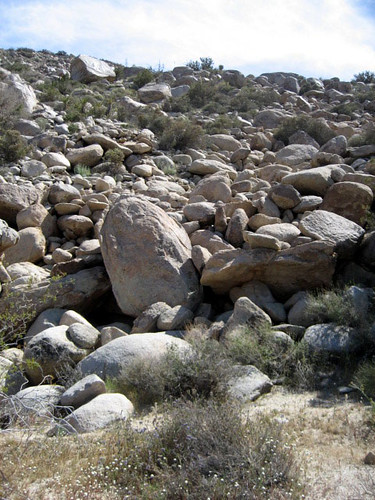 Boulder-strewn hillside along the way to the pictographs.

You head up the trail from the parking area, gradually gaining about 200 feet in elevation through some great desert terrain before starting to head back downhill.  Very shortly after you start back down hill, about a half mile from the trailhead, you’ll encounter the large boulder on the side of the trail with the paintings on the side of it.  It is a bit faded, but still clear, and obviously pretty fragile, so if you see anyone doing something stupid with it, feel free to kick their butts for us (and on behalf of the Kumeyaay people). 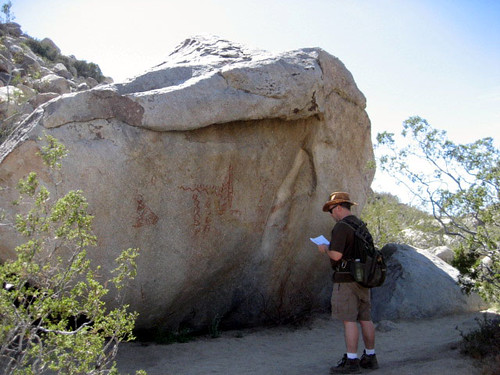 Standing in front of the pictograph boulder. Cool and interesting and historical and all that, but I really did expect more... 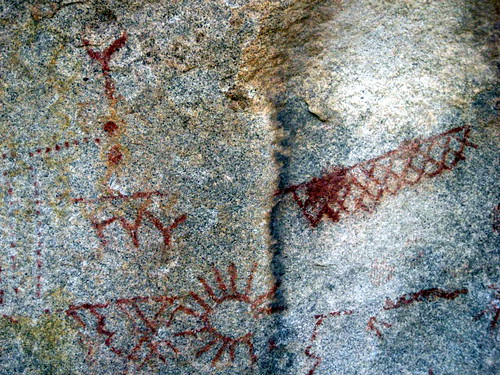 A close up of the pictographs. Nobody is sure what they mean, but I think it says "No dogs allowed on trails", in keeping with current Anza Borrego State Park policy.

After checking out the boulder (it is interesting and historically significant and all that, but will take less time than you might think), keep heading on down the trail.  Pretty quickly it turns from a trail into what is essentially a sandy wash, funneling down an increasingly narrow canyon.  Near the end, the rock walls are quite impressive, as it becomes what is essentially a chute that suddenly drops off to a cliff that looks like it would be a great waterfall during a rainstorm.  But more impressively, it presents a great view over “Smuggler’s Canyon” that is worth hanging out at and enjoying for a bit–and we even picked up a wireless signal there! 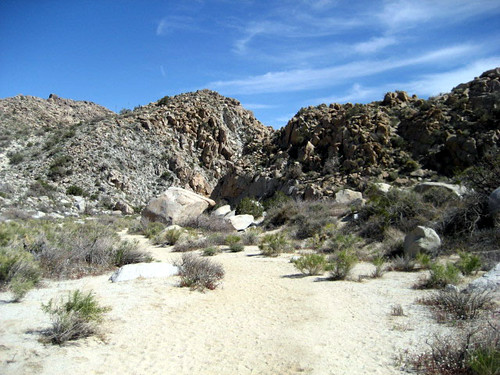 The trail quickly becomes more of a sandy wash, but if you keep heading down hill it is impossible to get lost and very easy walking. 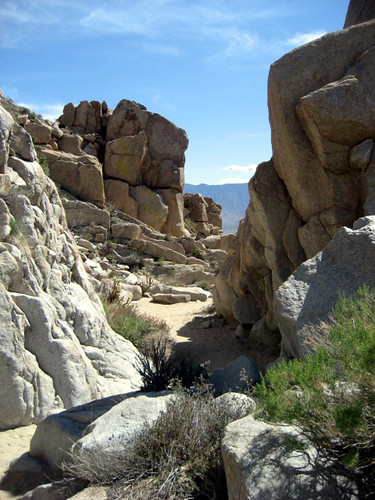 The narrowing canyon near the end. 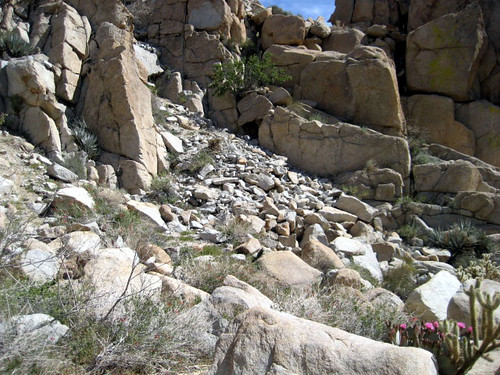 More cool rocks near the end of the trail. Plus a flowering cholla cactus in the bottom right! 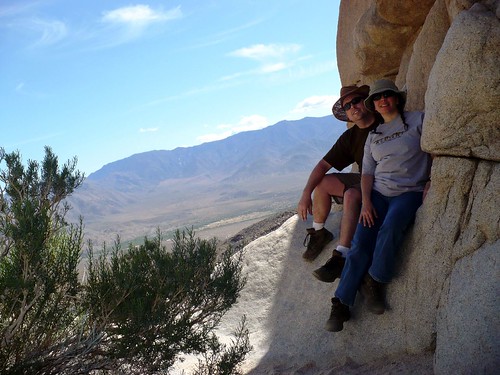 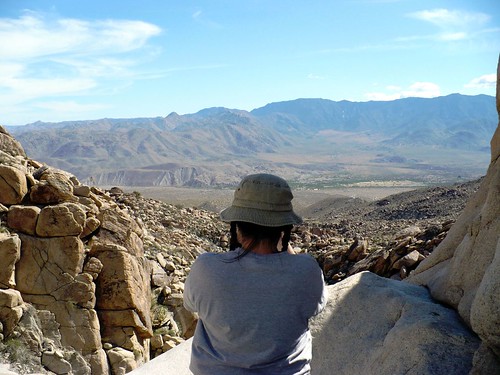 Colleen, taking advantage of the wireless signal at Smuggler's Canyon. After all, if you can't tweet about it or live-blog it on Facebook, did it really happen?

According to the map track I drew after the fact (this hike was pre-GPS), it is only 1.3 miles of relatively smooth hiking back to the parking area.  It really is a hike that all but the least fit people can make, even in nothing more than tennis shoes and no real hiking gear other than something to drink.  I’m actually surprised that I have come across write-ups of this hike that stop at the pictographs, because while they were interesting, the overlook at Smuggler’s Canyon was what really made the drive and hike worthwhile.  Oh–but while you’re walking in your Crocs and shorts, do be on the lookout for RATTLESNAKES!!!!!!!!!!! 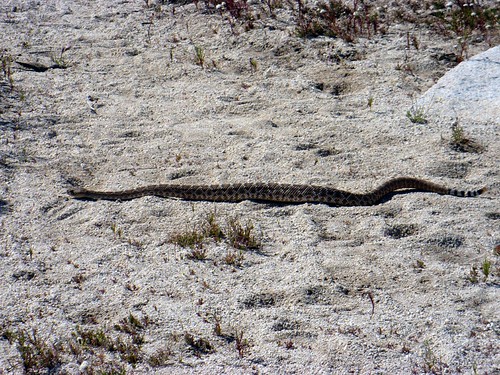 RATTLESNAKE!!!! This 3-4 footer was crawling right across the middle of the trail as we headed back to the car. He didn't bother us, and we tried not to bother him as he continued on his journey.

Yaqui Well, Morteros, and Pictographs are a great trio of hikes that investigate the long history of Native Americans in the region, all within easy driving and walking distance of each other.  I wouldn’t make the drive for any one of them, but as a group, they are well worth the effort–especially in the spring when the flowers are blooming and the desert sun hasn’t yet turned oppressively hot!

From there we headed back into the San Diego mountains west of Anza Borrego, much as the Kumeyaay people did every summer when the desert got too hot.  Except where they had to walk out of the desert and subsist on acorns and kill their own rabbits and deer for meat, we got to drive out in our air conditioned truck and eat apple pie in Julian.  We clearly have things easier these days…

View Morteros and Pictograph Trails in a larger map