You are here: Home / News / Hiking News / California Politics and Park Closures–Does it really have to be this way?

WARNING: This is unlikely to look like the OMG THEY CLOSED ALL THE PARKZ SO WE MUST RAISE THE TAXEZZZ!!!! blog posts that most outdoors folks have written on this story.

Feel free to complain to the management.

This past week, outdoorsy folks like us and most of you were aggravated to hear that the state was planning to close 70 out of the 278 parks in the State Park system.  Wifey and I (and our families) have been big fans of State Parks our whole lives, and a quick look at the list reveals quite a few parks that I’ve been to even in the last few years, including Annadel State Park (right across the street from where my grandparents used to live), Limekiln State Park (a great campground in Big Sur), Castle Crags State Park (one of the few decent campgrounds between Oregon and Southern California along the I-5), the Salton Sea Recreation Area (not too much positive to say here…), and Mono Lake Tufa State Natural Reserve (which we just visited last summer).  And while we protest vociferously the speciesist anti-dog policies of the State Park system since we got our beagle puppy last year, we were still intending to get up to Palomar Mountain State Park sometime soon.

In defense of the closure list and the Department of Parks and Recreation (DPR), it is very hard to manage a budget cut of $11 million this (half) year and $22 million next year in a budget that is only $120 million or so per year without some park closures.  And in (extremely marginal) defense of the legislature, it is hard to close a 2 year deficit of approximately $20 billion in a budget of $85 billion, without every department taking a hit.  In further defense of the list itself, it is remarkable that they can close 1/4 of their parks while maintaining 92% of their overall attendance and 94% of the revenues paid to the system, showing that some parks are clearly more valuable to the general public than others.  And the fact that just this past November, the state’s voters just rejected (with 57.5% opposed) a relatively moderate fee to protect parks funding doesn’t help our case to make a priority out of State Parks in making budget cuts.

But there are places where the state legislature and the DPR have clearly missed the mark and the point of their mission to maximize state services and minimize costs:

I hope that those who actually utilize the State Parks will rally in favor of sensible solutions to the budget crisis and make sure that all alternatives to closure are considered first.  Can a local government or non-profit take over operation of a park to avoid closure (even one not on the list that might spare another)?  Can personnel cuts be made that might allow fewer closures to be made?  If park closures are necessary (and some may well be), have we really chosen the right parks for closure, or are some being protected for political reasons?  If you care about the parks, you should indeed call your legislators and ask these questions.

And while you’re on the phone with them, tell them to stop banning dogs from the trails, would you??? 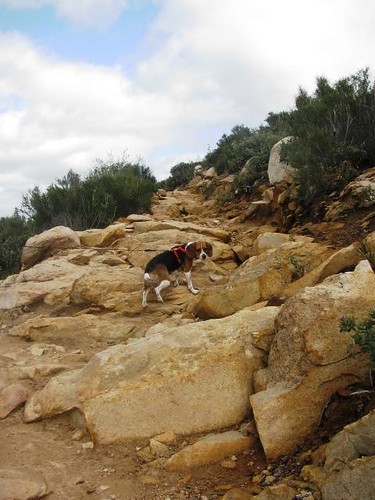 Holly would love to be able to hike in our State Parks--won't you please help lift the dog ban?