In a week where more Americans are getting hammered by flooding and tornadoes in other parts of the country, it seems remarkably petty of me to once again complain about the weird weather we’ve had in Southern California this year. I’ve previously whined about how it affected our plans in both the Iron Mountain and Devil’s Punchbowl hikes, and remarked on the snow we found on our Bonita Falls hike.

But now that we’re into mid-May, we were a little surprised that the forecast still called for the chance of rain–or even snow, in the Angeles National Forest last weekend.   But when that rain didn’t materialize, and Mount Baldy’s snow cap appeared to have disappeared, based on the view we get in Orange County, we decided it was safe to try to climb Mount Baden Powell, the 4th (or 3rd or 5th, depending on where you look or how you define it) highest peak in the San Gabriel Mountain Range. 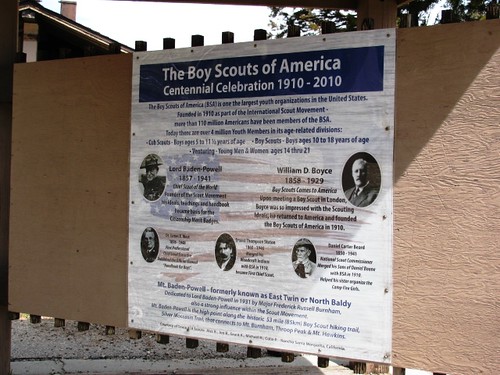 Sign at the trailhead telling the story of Sir Robert Baden Powell and the Scouts.

Named after Sir Robert Baden Powell, the founder of scouting, this 9,400 foot peak is one of the region’s “must climbs”–quite literally for Boy Scouts in California, for whom climbing to the scouting monument located at the top of the mountain is a rite of passage.  In fact, we apparently missed a group of 20-30 scouts by just a few minutes in the parking lot, as they apparently got out of bed and on the road just a bit before we did (not an unusual occurrence). 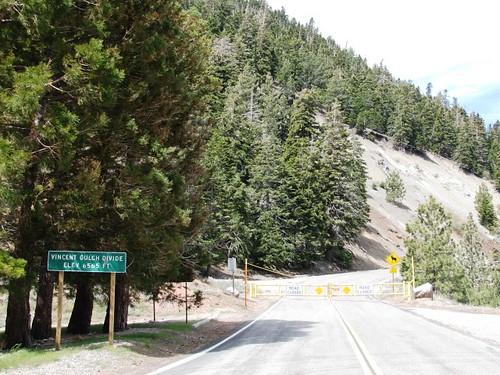 Vincent Gulch sign at the parking lot off Angeles Crest Highway. Note the road closure gate immediately past the lot. 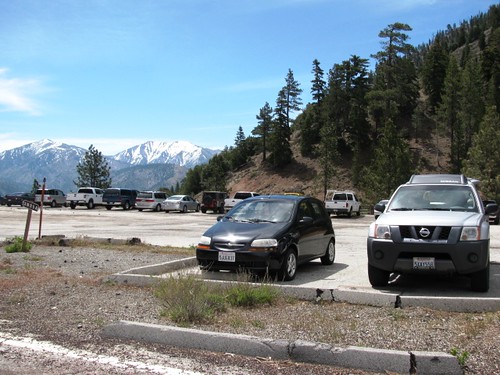 Full parking lot at the trailhead.

We drove to the Vincent Gulch Trailhead (approximately 6,600 ft elevation) from the east, coming up I-15 to the 138 to Angeles Crest Hwy.  About 10 miles past the City of Wrightwood, shortly past the Grassy Hollow Visitor’s Center, is the parking lot at Vincent Gulch.  We were glad that we’d come that way, because immediately west of the parking lot, the highway was closed!  We were also glad we’d chosen to climb the peak via Vincent Gap rather than the Dawson Saddle route we had also considered, since there was no way to get to that trailhead.

We had read that Angeles Crest Highway had mostly re-opened, but hadn’t checked to see that not only had the western end above La Canada been re-closed for further repairs, but the seasonal closure past Vincent Gulch (to Islip Saddle?) had yet to open at all! 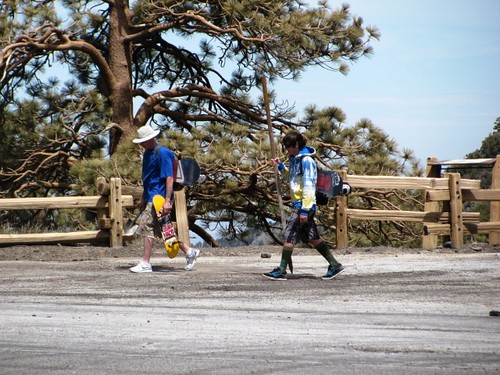 We noted the weirdos hiking with skateboards and snowboards in the parking lot. In retrospect, perhaps we should have taken that as a hint? 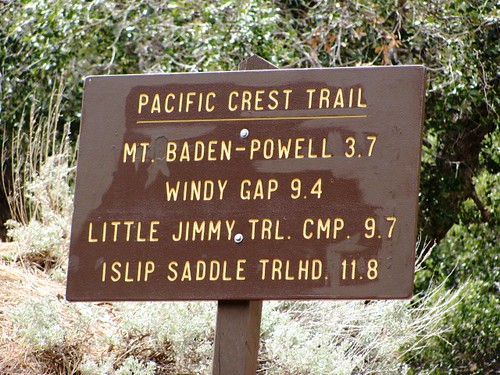 Signage for the Pacific Crest Trail.

We met several folks in the parking lot (and then later on the trail) who were actually travelling the entire Pacific Crest Trail, from the Mexican border to the Canadian border.  While we were both jealous of the concept of being able to take that kind of time and see that kind of beauty and do something so ambitious, since Colleen is skeptical of even a nice state parks toilet and generally rules out a Forest Service toilet entirely, and as much as I like camping, three nights is usually my limit even in the most awesome of camping conditions, I don’t think we’ll be doing that any time soon… 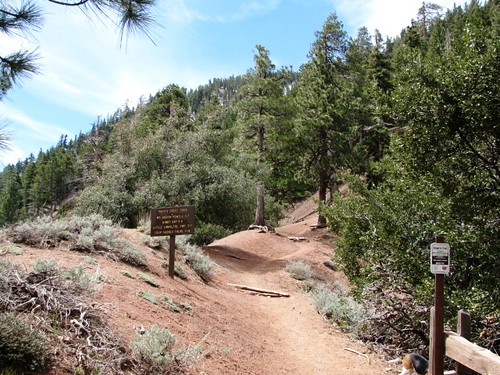 Beginning of the trail--looks nice and dry here!

It was a beautiful day and we felt quite up to the challenge of going up the 40 or so switchbacks and 2,800 feet of elevation, so we started up the trail.  The serious climbing starts immediately and never stops, but really wasn’t as steep as some other hikes we’ve done, so it wasn’t killing us–though we could feel the thinner air in our lungs. 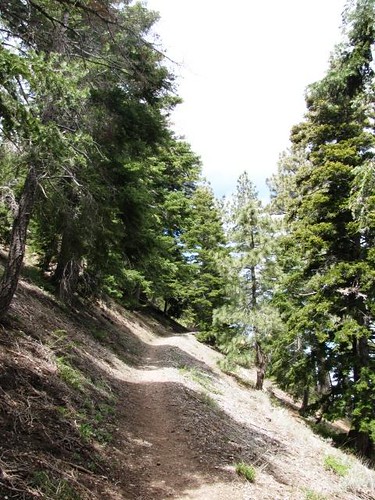 Nicely shaded trail through the trees.

It was a much more shaded trail than I expected.  The forest was beautiful, and the trail was very well-marked and a nice texture–not too rocky, and not too soft.  Within the first mile (about 7,100 ft elevation), we saw a random spot of snow off the trail, which surprised us a bit (and thrilled Holly), but we kept on uphill. 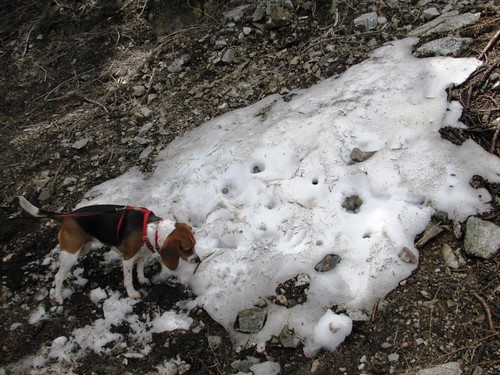 Holly is excited at the sight of the first small patch of snow. 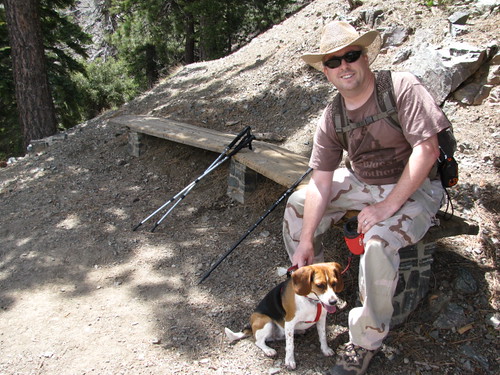 A nice bench for resting at a scenic outlook spot. 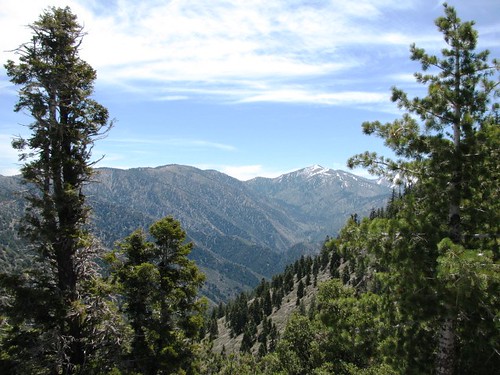 View from the bench.

At about a mile and a half (and 7,600 ft elevation), the snow was getting thicker in spots–even to the point where we lost the trail, because the thick snow at one spot totally obscured the switchback, causing us to go straight on a trail that quickly disappeared, rather than make the turn we were supposed to make.  We didn’t go too far before we figured out our mistake, because the trail was quite obviously less defined than the rest of the trail and a lot more dangerous! 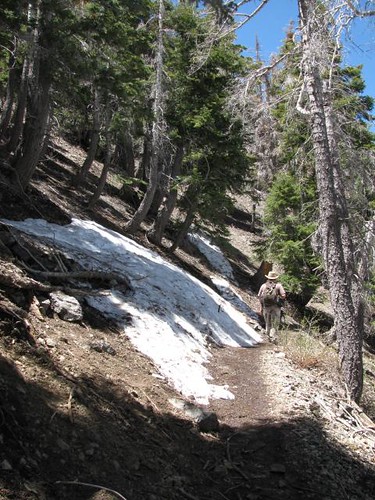 Me walking right by the snow patch, which is obscuring the switchback to my upper left. We continued straight here for a short while, by accident. 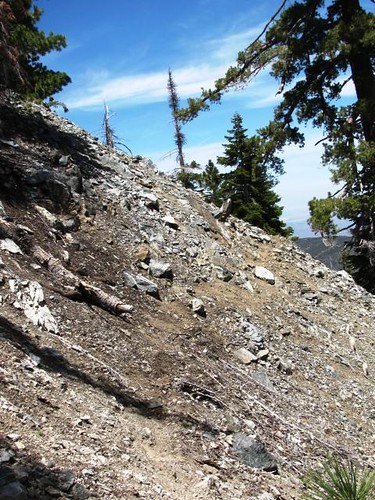 Yeah, this trail doesn't seem quite right. We even marked it "sketchy part of trail" on the GPS before realizing we'd made a wrong turn (or rather not made the right turn). 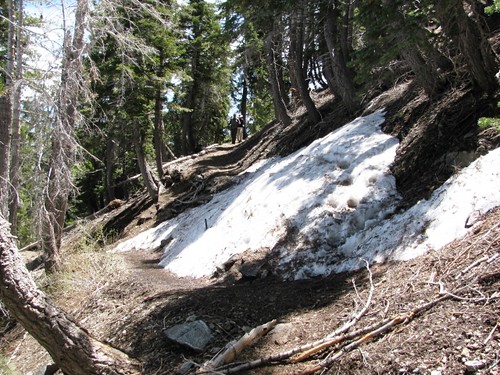 Coming back to the trail, we can see the switchback we missed above the snow.

But we still didn’t panic, and we continued up the trail.  Just before the two mile mark (7,800 ft elevation) we hit the junction with the Lamel Springs Trail, and stopped to have a snack.  We knew that the spring was not too far off the main trail, but still felt pretty confident we’d make the peak, so we decided to skip it and check it out if we were still in the mood on the way back down. 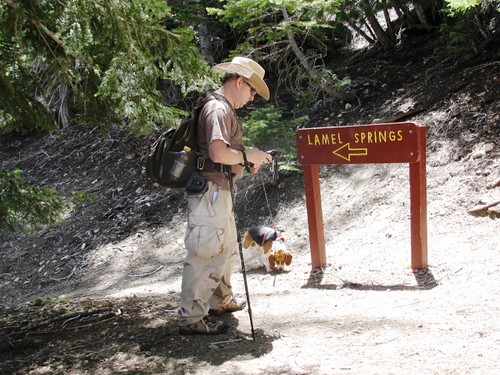 Sign at the cutoff to Lamel Springs, just before the two mile mark. This was one of the last dry patches we encountered.

Unfortunately, by the 2.5 mile mark (8,000 ft elevation), the snow had gotten to the point where the trail was totally obscured by snow that was at least knee deep.  There were patches of open trail, but more and more of the route was completely covered.  Soon we heard the sounds of other hikers coming down from above, and we pulled over to let them by.  We talked to the first group of fairly well equipped guys to come by, and found that they had turned around because the path above was too icy.  Then another group of hikers told us the same thing.  Then came the scouts.  They reported that the strict scout rules didn’t allow them to go on because it was too dangerous.  In the midst of the very strung out group of scouts, we talked to a couple of hikers that said they had made it to the peak, but they didn’t recommend it. 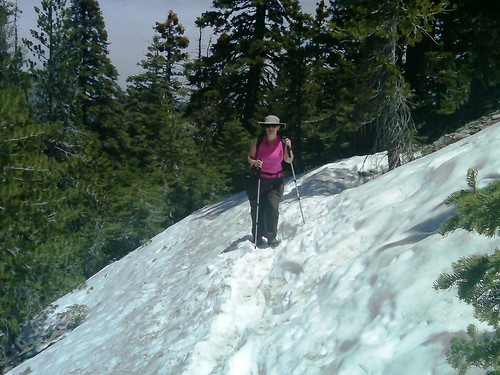 The tracks in the snow are easy to follow, but... 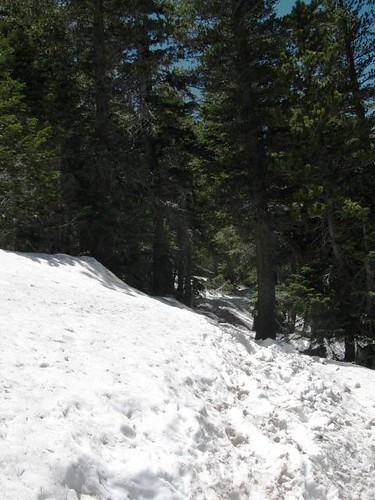 What happened to the trail??? 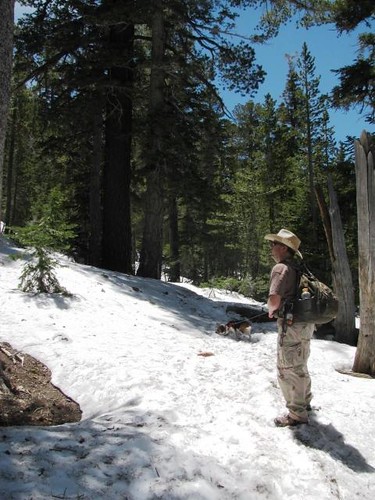 Where my snowshoes at? Looking up above us to see if the trail looked any clearer as we climbed higher. Answer: No!

While Holly was still digging the snow and the trail, and probably could have pulled us to the top, we were equipped merely with hiking boots and no crampons, and were already slowing a bit in our rate of climbing.  We decided that we’d be better off not risking life and limb(s), and head back down.  After all, the day was still young, as was the year, so we could still hit Bass Pro on the way back home to pick up crampons and other supplies, and come back and hit Mount Baden Powell later in the year when the snow was gone.

Figuring we’d hit about 1600 feet in elevation (our second highest of the year), and would end up with about a five mile hike, we headed back down hill with our heads held (relatively) high, even if we didn’t bag our peak.  We did take the side trip to the spring on the way back down, which was nice, though the spring was  a bit underwhelming…

In the end, it was still a nice day.  We enjoyed the portion of the hike we were able to do, and are definitely going to come back when the snow melts.  But we thought we should do this write-up mostly as a warning to always check ahead of time for both road and trail conditions before you commit to a hike.   The moral of the story is that living in Southern California means that not only do we have an incredible diversity of terrain and habitat, but we also have a diversity of potential problems.  Roads and trails can be closed due to rain, mud, landslide, fire damage, or even snow!  Check out Caltrans (in California) for road conditions and the nearest ranger (or other park office) station for trail conditions before you spend an hour or more trying to get to the trailhead.

The good news is, that quitting the trail early meant we hit Bass Pro early enough to get rattlesnake training for Holly, which I wrote up separately here… 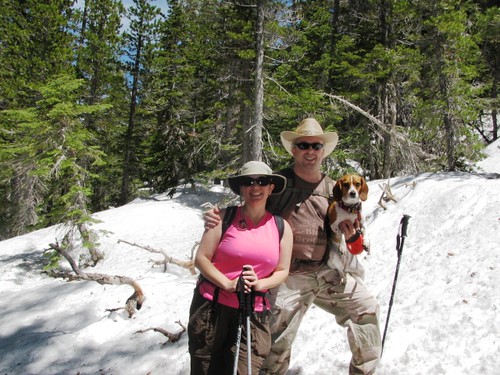 Defeated today, but we'll be back!

Elevation profile for our partial hike (click through for large version).