NOTE:  Since writing this post in 2011, Vulcan Materials has built a new access trail all the way across the quarry that is open 7 days a week, all year long!  Dogs are only allowed on weekends and holidays, and the walk across the quarry adds about a 2/3 of a mile each way to the old trail, but it is well worth it.  For more info on trail access and rules, see the link here:  http://www.azusarock.com/index.html

I know the title of this post is a bit of an oxymoron.  How do you have a very beautiful, relatively easy, hike to amazing waterfalls just outside of the City of Duarte (right next to the intersection of the 605 and the 210) that is simultaneously crowded and rarely visited?  You start by building a rock quarry at the entrance of a beautiful canyon, and then you only allow access to the trail a little over a dozen times per year.  That’s just about the perfect recipe for creating a very crowded trail that is only used 10-15 times per year!

As a person who supports private property rights, and who even had a controversial quarry project as a client in my former life as a public relations hack, I understand the need for quarries, and the liability concerns about  having people tramping across a relatively dangerous workplace trying to find a trailhead.   In this light, the fact that Vulcan Materials has set up a system to allow free shuttles (really just large passenger vans) across the quarry on 10-15 Saturdays a year is very admirable.  But in retrospect, it would have been nice if more frequent and regular access had been required by government agencies before the permit had been issued in the first place. 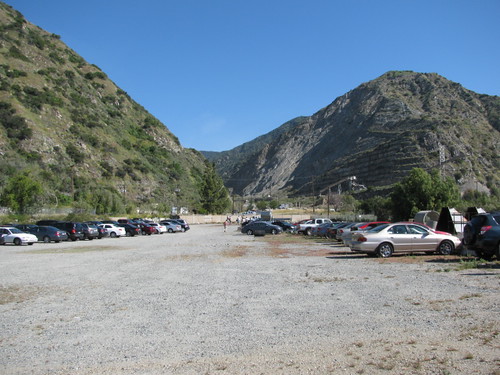 Overflow parking at a trailhead? Always a bad sign… 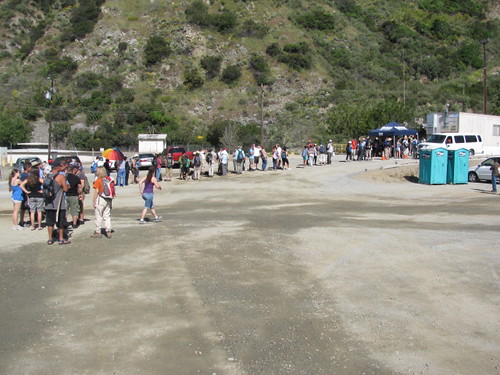 A line for the shuttle to the trailhead? Always a bad sign…

But it is what it is, and right now, based on the last three years of scheduled access days, Vulcan Materials allows access about twice a month during the Spring, and then a few other days through the rest of the year.  The main point is, that before you try to plan a hike up Fish Canyon, you’d better check the open access schedule, which you can find here.  They update the schedule periodically, and may very well add more dates later, but as of toda, the only remaining dates published for this year are July 9th and July 23rd. 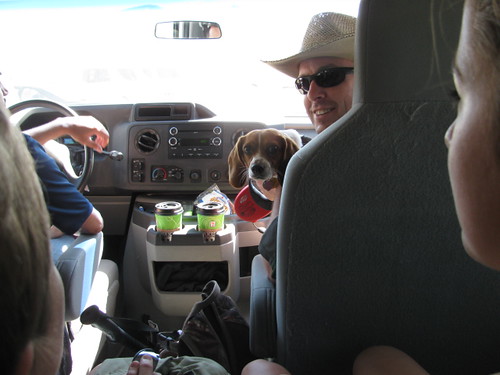 Dogs are permitted on the shuttle. Holly got us upgraded to first class. 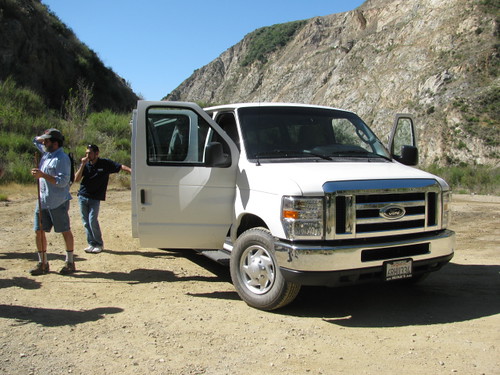 Really more of a van than a shuttle, but it did the job.

Really, the hassle of the crowds and the irregular access dates are a pain in the butt, and would totally not be worth it, except that it is actually totally worth it!  It really is a beautiful canyon, and a great trail, and the falls themselves were breathtaking.  We’ve come to expect that any easy hike to waterfalls and swimming holes in LA are going to be crowded, but on this particular day, it was among the worst.  Fortunately for you, and unfortunately for us, we were told by the shuttle driver and other sources, that this was actually the biggest day they’d ever had.  It was a hot day (which always attracts fans of waterfalls) and apparently several internet meet-up groups (that damn internet!) had chosen that day for a group hike, which led to a line of over a hundred people when the shuttles started at 7am!  When we arrived around 10:30 or so, the main parking lot was totally full and we had to park in the overflow parking area (our shuttle driver insisted he’d never seen them do this before).

Unlike other crowded LA area hikes where the trail often looks like an unpaved freeway, The entire route here was single track, and at some points, the overgrown vegetation (often poison oak) made it less than a single track.  Truth be told, I was a little concerned that we should have worn long pants rather than short pants after seeing all the poison oak encroaching on the trail, but none of our group was affected, so all’s well that ends well, right? 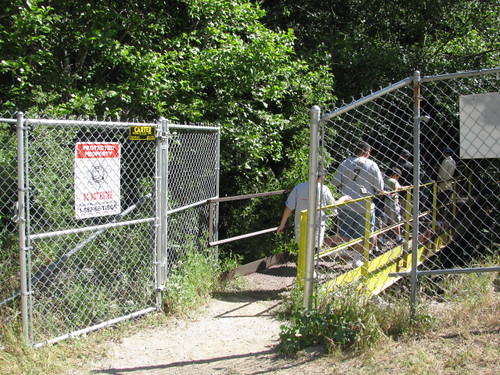 The sometimes locked gate at the trailhead, leading immediately to a bridge over Fish Creek. 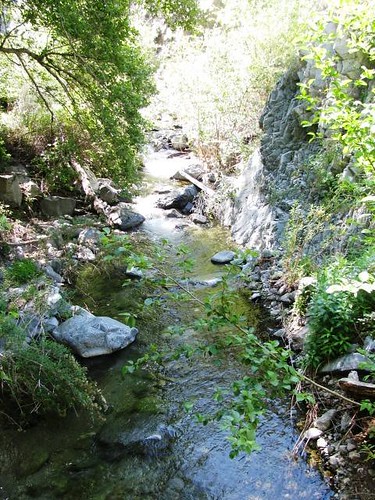 A look up the creek from the bridge at the trailhead.

The shuttle drops you off at the end of the quarry area, right where the trailhead starts at the tree line.  You almost immediately cross a bridge over a fast running stretch of stream below and then suddenly, the barren quarry land and all the sounds of the city disappear, and you are transported to a nice wilderness trail–crowded with other people enjoying the solitude of nature… 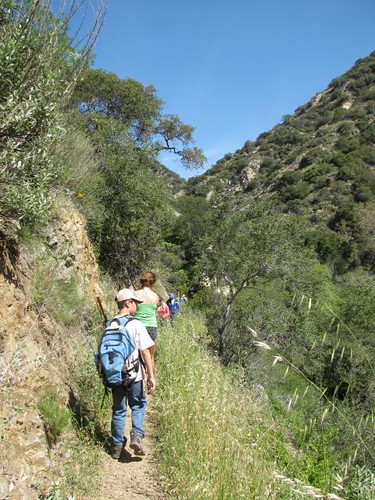 Heading up the trail, with a small crowd of hikers in front of us. Onward up the narrow trail through the narrow canyon.

This particular day happened to be the first (and only) “hot” day of the year, but about half of the trail was well shaded and close to the creek, so it never really seemed too warm to hike.  And even if it had been too hot to hike, there were many opportunities along the way to take a dip in the creek or at least toss some cool water over yourself or dunk your hat. 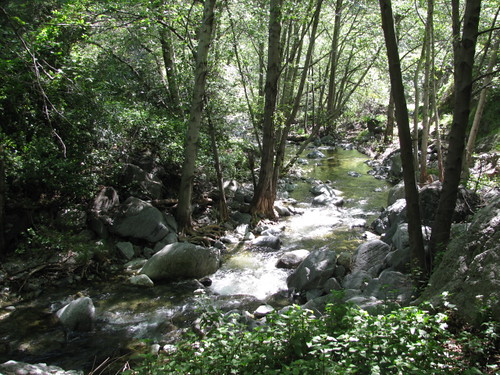 The trail frequently runs adjacent to the cool creek. 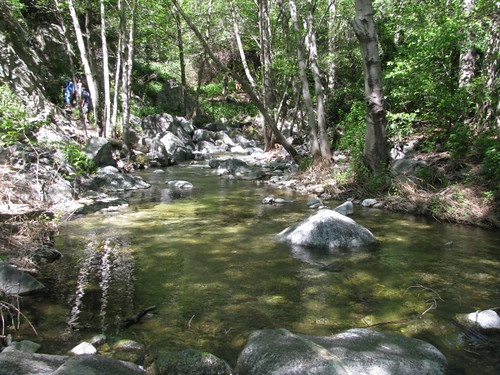 One of the nice pools along the way. 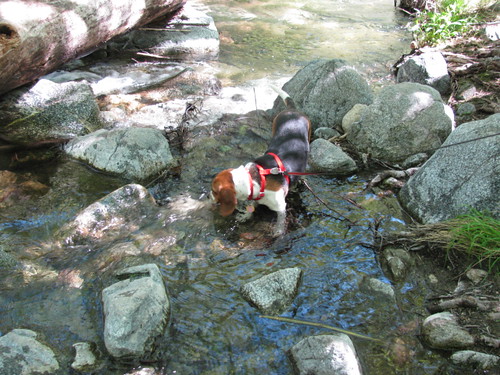 Holly enjoying the cooling waters along the trail.

The trail hugged the west canyon wall right up until near the end, and the canyon was narrow and deep enough that it played all sorts of tricks with my GPS unit.  I’d read on the geocaching sites that the satellite signals would be iffy at best, and they were not wrong.  I got an erratic signal on the way up to the falls (that had me occasionally traveling way off trail), but the signal disconnected at the falls and never reconnected all the way back to the parking lot.  As a result, the map and elevation profile below has been redrawn based on the one way track, with the assistance of aerial photos and topo maps.  So don’t take the track as gospel, but it is impossible to get lost along the way, and it is a pretty faithful representation of what the trail and elevation change looks like.

Typically we love single track trails, as it gives us more of a feeling of remoteness and exploration than a fire road that could be driven rather than hiked.  On this particularly busy day, though, the single-trackedness worked against us a bit, as we regularly encountered the crowds returning from the falls and literally had to hug the canyon walls or cliff’s edge to allow them past–preferably in areas not totally over-run by poison oak! 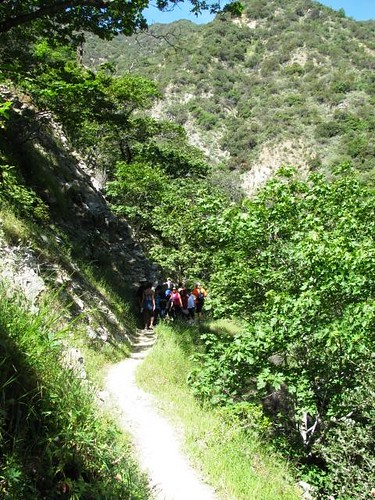 Single track trail, with a large crowd headed our way. 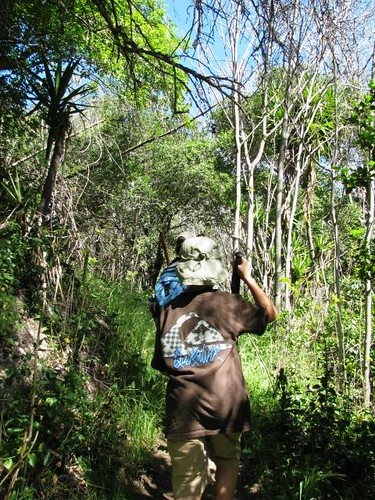 Narrow trail with poison oak on both sides.

While it was all single-track, it was mostly remarkably well-maintained, and there were even a few interpretive signs along the way that talked about the history of Fish Canyon (which I’m sure Colleen will write about soon).  There was only one serious water crossing, near the end, about a third of a mile before the falls, and a sort of short spiral stone staircase just before the creek crossing.  After the creek crossing, the last part of the trail hugged the east side of the canyon.  There were some nice, quiet swimming holes off to the left of the trail, which we considered climbing down to for some more peaceful rest and recreation, but we wanted to hit the falls first. 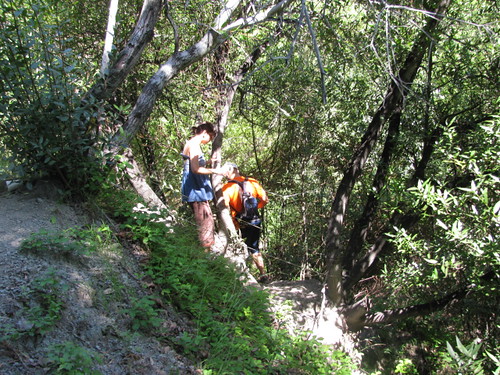 A narrow circular staircase along the trail. 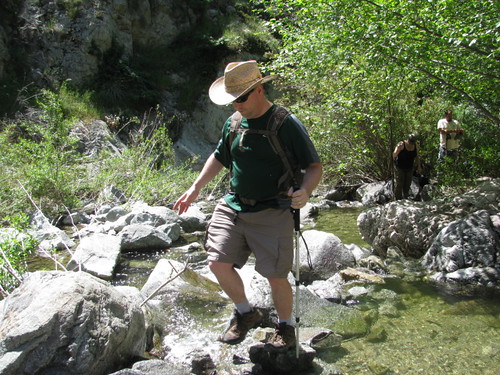 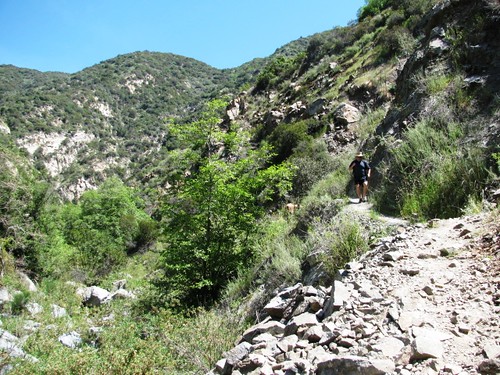 The final stretch into the canyon, now on the east wall of the canyon.

Right before you turn left towards the falls, there is a great view that is hard to miss.  From this perspective, you can see all three levels of the falls plunging into a pool, plus a lower waterfall that feeds yet another pool.  Unfortunately, the falls area and the pools were a madhouse on this particular day.  People were diving into the pools at the lower falls, and crowded under the falls in the larger pool.  You had to carefully scoot down the rocks to get to the pools, but really anyone could do it.  It is hard to begrudge the crowds, because we were there for the same reason they were, and the falls and the pool really were pretty spectacular. 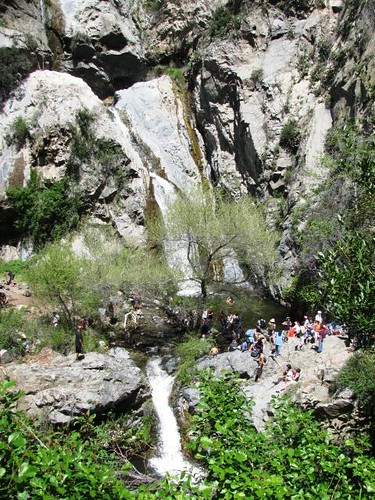 First view of the beautiful falls and the crowded pool. 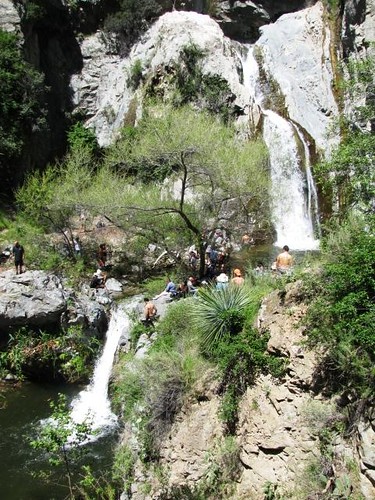 A view of the lower falls into the lower pool, and the bottom of the main falls and the larger pool above. 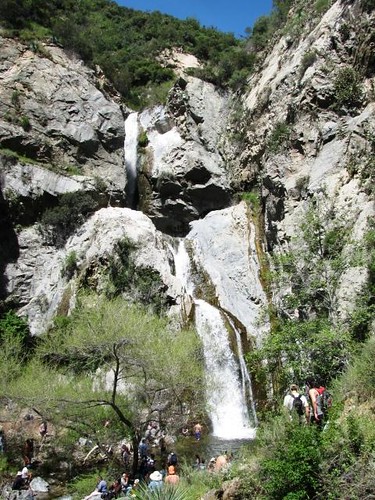 All three tiers of the Fish Canyon Falls. 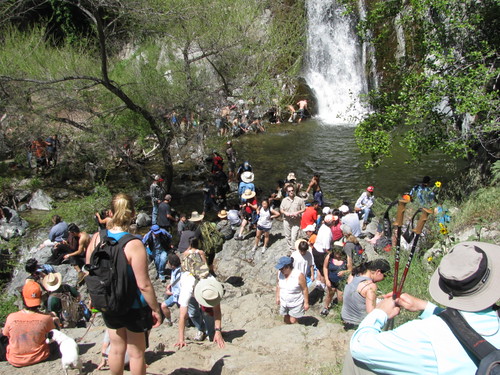 What a friggin’ zoo…

We stayed there at the pools for as long as we could stand the crowds, but neither us nor the kids were particularly motivated to jump into the water at that point and decided just to head on back.

As crowdedas the trail was on the way up, the hike back was just wonderful.  The shuttles stop taking people to the trailhead at 11am, and the last shuttle back to the parking lot leaves at 3pm, so as we headed back at 1pm, there was really nobody left to come up the trail, and we only passed a couple of people on the entire hike back.  Seeing the trail without being crowded by folks who don’t know proper trail etiquette was an entirely different experience than the hike up, and we thoroughly enjoyed the peace and beauty of the hike back down. 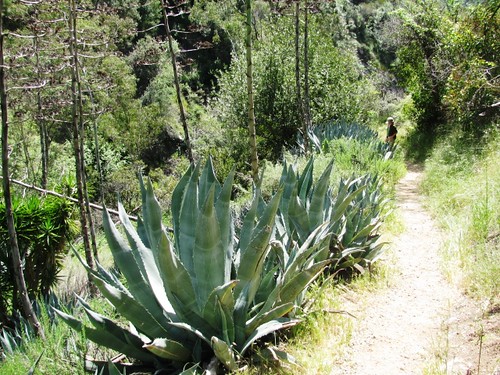 A much quieter hike on the way back. Time to stop and smell the giant agave 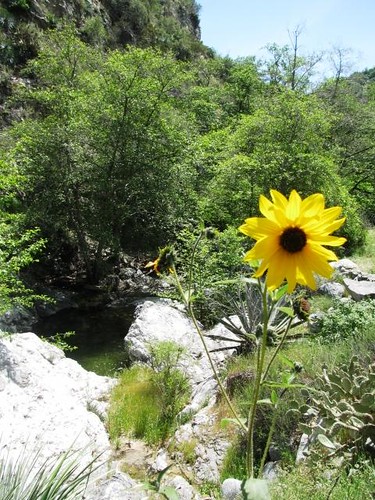 And the flowers. Nicely posed in front of a pool in the background. Feel free to submit this awesome photo for an award somewhere. 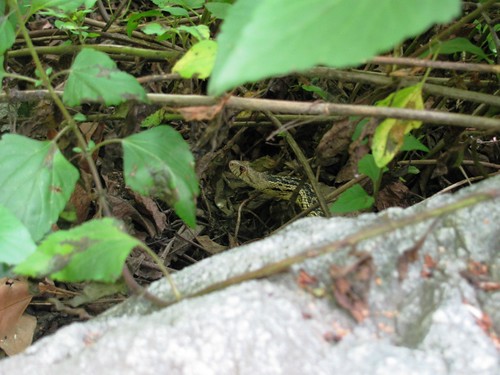 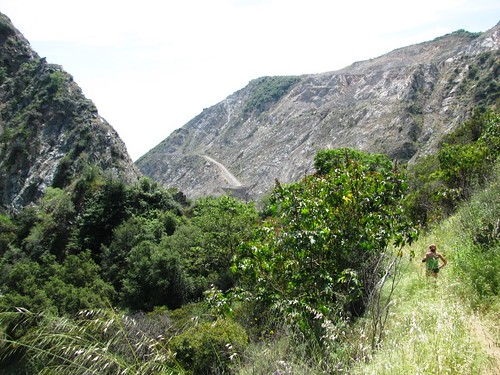 Nearing the end of the trail, you can see the very hot and difficult alternative trail on the hillside in the middle that bypasses the shuttle and quarry.

We did come across a harmless 4 foot long gopher snake, which initially freaked out the kids (who were in the lead), but as a guy who once fancied himself as a future herpetologist, I was pretty pleased with it myself.

We hit the shuttle stop about the same time as a couple of poorly outfitted hiking hipsters, which I dearly wish we’d gotten a picture of, but didn’t.  I was impressed at how quickly our shuttle arrived, and we were soon back in the parking lot, ready to head home. 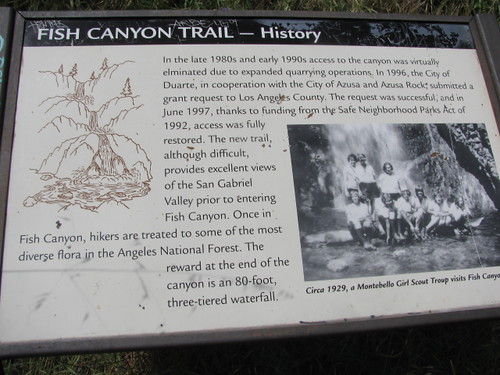 We even had time to read the historical signs on the way back!

Our shuttle driver and another employee of Vulcan Materials told us that this was the busiest day they’d ever seen, so most of the time, it shouldn’t really be quite as crazy crowded as it was on this particular day.  But I have to say, that even with the having to find the free access days ahead of time, and the annoyance of the Disneyfied crowds, it was still worth it, and unless you’re even more intolerant than we are, you will enjoy the hike.

It is possible to take an alternative route to the Falls that skips the quarry and shuttle and crowds entirely, but it is very exposed, very poorly maintained, and not recommended by many hikers.  But it would allow you to hike mid-week or on non-shuttle weekends to enjoy the falls alone.  As I write about it, it’s actually sounding more and more worth trying, actually…