You are here: Home / Hike Reviews / Hikes By Distance / 3.1 to 5 Miles / Peters Canyon East Ridge View Trail to Peters Canyon Trail Loop — A bit of nature on the edge of town

Regular readers of Greene Adventures know that we prefer to do our hiking out of town, with as much solitude and wilderness feel as we can find. We deride the “Disney hikes”, crowded with novice hikers loudly trying to get to a waterfall right on the edge of town, and leaving garbage behind. But sometimes, you just don’t have the time or energy to go far out of town, but you still want to do more than walk around the block or head to the park across the street that you walk every day. This is the niche that Peters Canyon Regional Park falls into.

As backyard trails go, it is not quite as remote feeling as Santiago Oaks Regional Park, Chino Hills State Park, or Whiting Ranch Wilderness Park, but is more like Irvine Regional Park (which it is almost immediately adjacent to), in that the trails are mostly nice and natural feeling, but you never really lose sight of civilization (or crowds of people, in Irvine Park’s case). 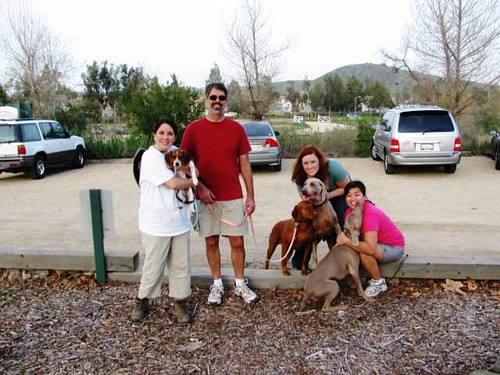 The park entrance is on Canyon View Avenue, off of Jamboree Road, on the border of the City of Orange and the City of Irvine. You can reach it by taking Jamboree north from I-5, or Katella or Chapman east to Jamboree south, from the 55 Fwy. There is a trailer that serves as a ranger office (where you can get a trail map), a set of restrooms, and a kiosk where you can pay for parking in the parking lot. 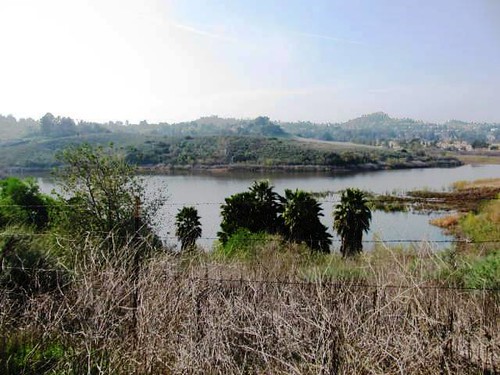 A view of the reservoir from the trail.

According to OC Parks, Peters Canyon Regional Park is 359 acres, with a 55 acre reservoir at the north end of the park, and over 100 different types of birds live or pass through the park and reservoir area. The park was originally part of Rancho Lomas de Santiago, and was called Canon de las Ranas (Canyon of the Frogs) during the Spanish Colonial period. James Irvine bought it in 1897 (when it was being farmed by James Peters, after whom the park was named), and turned much of it into a golf course shortly thereafter. During WWII, the Army used it and what is now Irvine Park as a training area, and staged battles between the two camps. In 1992, the Irvine Company gifted the land to the County of Orange, for use as open space and the park we enjoy today.

Now it is a very popular place for bird watchers, trail runners, and dog walkers. We were definitely in the dog walker category, as we brought our still-new puppy with us, and joined a couple friends with three weimeraners between them. There were a lot of dogs in the park with us that day, some better behaved than others.

From the parking lot, we headed east on Lake View Trail, which virtually parallels Canyon View Avenue, before turning right onto Peters Canyon Trail just before Jamboree Road. Pretty shortly, the trail separated from the road, and shortly after that, a ridge hid the road from view. You’ll never really lose sight of the houses on the hills overlooking the west side of the park, but the trail does get quieter and more natural feeling once the road noises are gone. 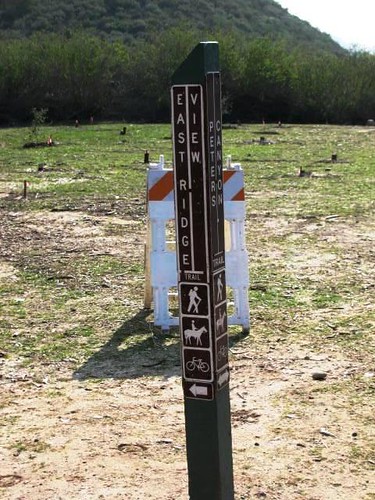 Trail junction sign. All of the trails were very well marked.

About a mile into the loop, you’ll come to the East Ridge View Trail, which we followed up onto the ridge on the east side of the park (kinda obvious, I suppose…). From here, you get a nice view of the park to your right, but also a nice view of people’s backyards immediately adjacent to the park on your left. This trail does a little bit of up and down as it follows the hilly ridge, but nothing to severe. 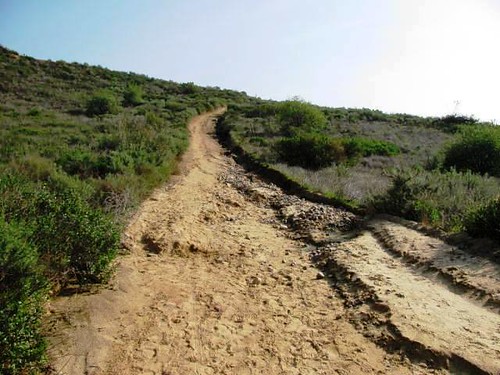 Hey! Looks like a real trail up the hill! 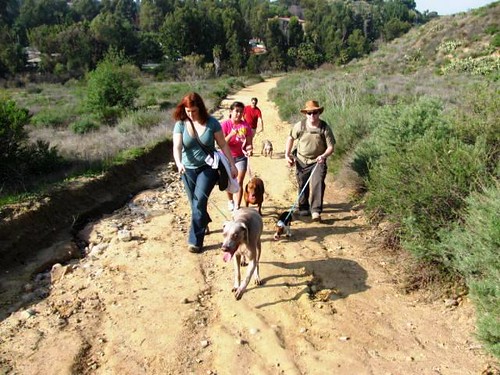 Our dog brigade heading up the East Ridge View Trail. 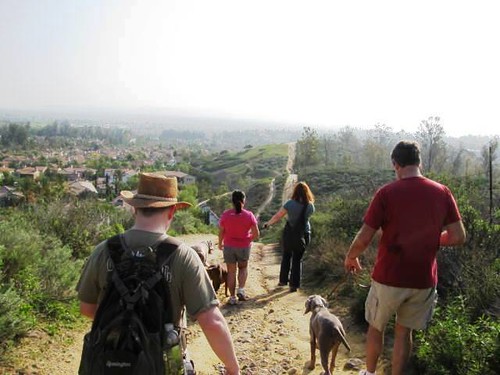 This is my primary visual memory of the hike. Houses and civilization on the left, and wilderness and nature on the right.

Just over two miles into the hike, you’ll come to the southern end of the park. Here the trail makes a bit of a u-turn, and then heads down a hill, where it reconnects with Peter’s Canyon Trail. Where the first half of the hike was almost entirely exposed (so look out on a hot day!), this section was actually nicely shaded, and there was water running in the creek alongside the trail–at least along the “Creek Trail” spur off the main trail (we were there at the end of January, 2010, so your experience may vary). 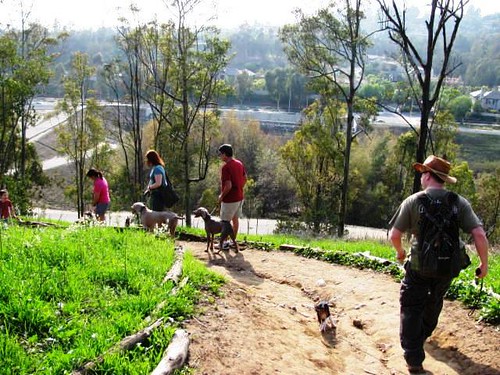 Trail back down to Peter's Canyon Trail at the south end of the park. 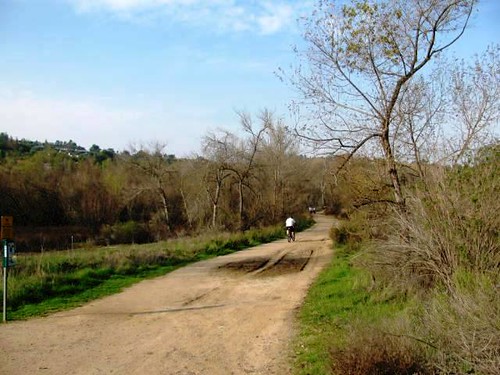 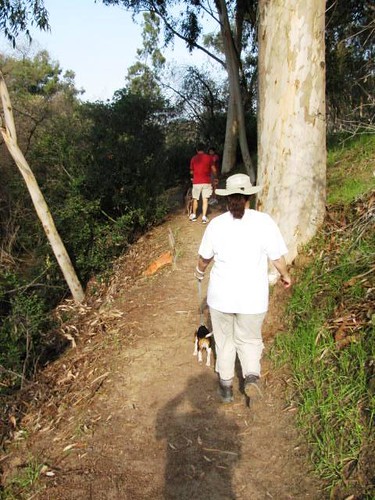 One, very short, single track trail section over the creek and amongst the trees. Nice! 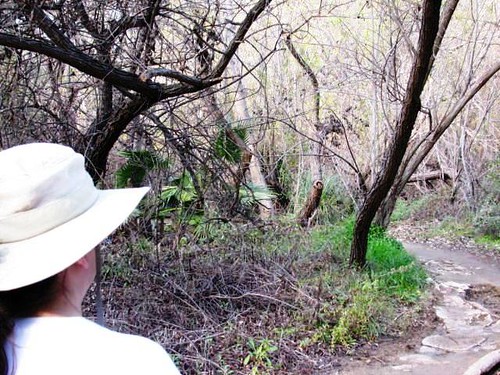 A creek! With real water! (Your mileage may vary in months other than January) 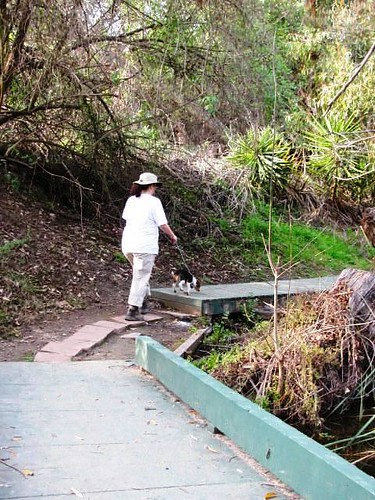 A couple of bridges over the creek to keep your boots dry. 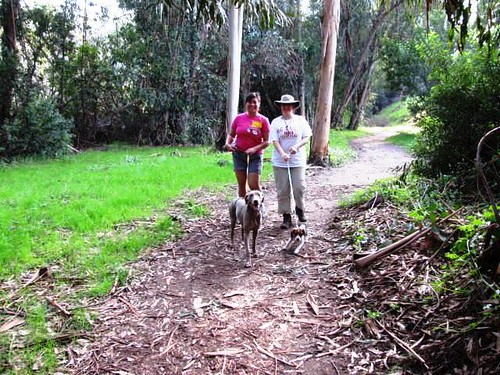 The last of the shady creek trail.

Unfortunately, this shaded canyon soon comes back out into the more exposed part of the park again, for the final stretch of the trail. At about the 4 mile mark, the trail intersects with the junction to East Ridge View Trail that you took earlier, and the rest of the hike we did on this day just repeated the beginning of the hike. You can also take a left onto the Lake View Trail, which will take you all the way around the reservoir, adding another mile or so onto the walk and giving you nice views of the reservoir (again, obvious trail names are obvious). We would have done that trail to make the complete loop around the perimeter of the park, but our lightweight hiking friends had already had enough exercise by then, and decided that almost 5 miles was plenty enough hiking for them. 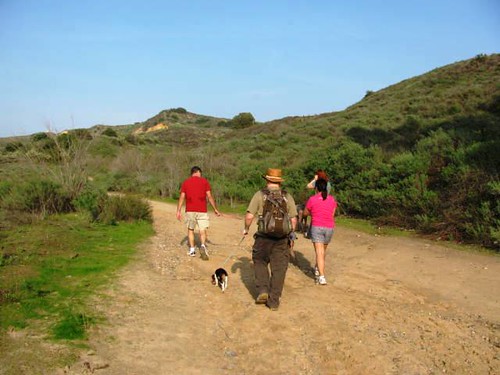 Back on the exposed Peters Canyon Trail, headed back to the parking lot.

As you can see on the map, there are a couple of even shorter options available, by going just around the reservoir, or taking the Gnatcatcher or Scout Trail cutoffs, if you don’t have enough time or energy for the full loop.  This makes the park a nice choice for a last minute decision to get out of the house, with or without the dog.  It really is better than a walk around the block, even if it does fall short a bit of the purer wilderness experience you can get by going just a bit further out of town.
View Peter’s Canyon.kml in a larger map

Leave a Reply to The Taste Place Cancel reply