You are here: Home / Hike Reviews / Hikes By Distance / 3 Miles or Less / Laurel Falls: A short scenic family-friendly hike in the Smokies

Last Fall, we vacationed in Nashville, Tennessee and Great Smoky Mountains National Park.  After hitting a piece of the bourbon trail and the Makers Mark Distillery in Kentucky, the Jack Daniels Distillery in Lynchburg, and Music Row in Nashville, we were looking forward to seeing some of the wilder parts of the region and do some actual hiking and outdoorsy stuff.

We had rented an amazingly nice and reasonably priced cabin in Wears Valley just outside the National Park entrance, and after a day driving around Cades Cove, and a day in North Carolina, we planned to spend a day hiking a piece of the Appalachian Trail, but our longer hike was thwarted by snow and ice, so we ended up with a lot more time at the end of the day than we expected.  So on the way back from Clingman’s Dome and Newfound Gap, we stopped at Laurel Falls, which was listed as one of the most popular hikes in the Park, but with a roundtrip total of less than three miles, we thought it was beneath us–or at least not worth taking a whole day to schedule around. 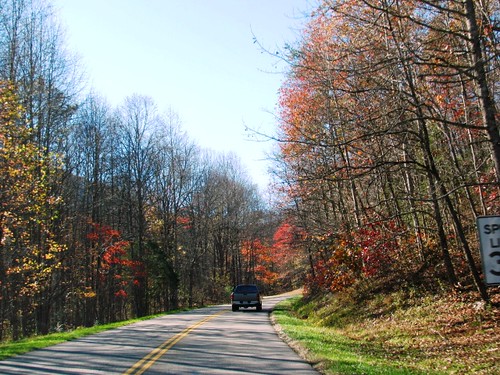 Part of the beautiful drive between Newfound Gap and Laurel Falls. 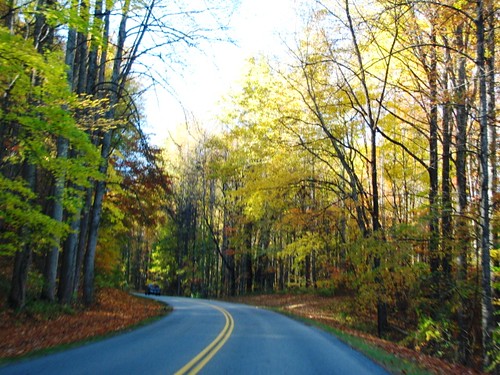 More of the beautiful colors--it is a bit blurry because Colleen was taking the pictures through the windshield of the car as we drove.

We were there in the second week of November, and though we had missed the peak of the Fall foliage season, the leaves were still quite colorful and we really enjoyed all the drives we took through the Park.  There is a pretty clearly marked trailhead and parking area just about two miles east of the Sugarlands Visitors Center. 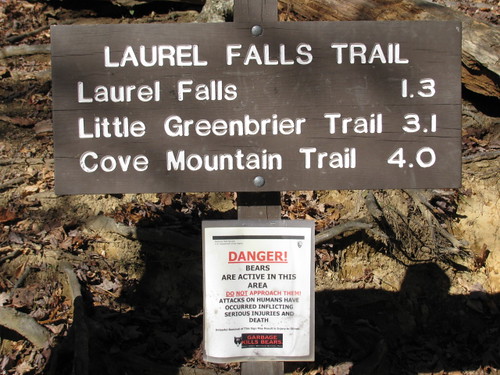 Well marked trailhead. We could have hiked all the way to Little Greenbrier School, but drove there later instead. (Don't mind the bears!)

The trail is equally well marked and impossible to get lost on.  There was also an interpretive guide with points of interest along the way there available at the trailhead (but seems to be strangely unavailable online).  The fall foliage was beautiful as we walked up the paved, wheelchair (with assistance) and stroller accessible path.  You fairly quickly get far enough away from the road that you don’t hear a constant road noise, but even on the off-peak mid-week day we were hiking the trail, you were rarely alone in the wilderness, as you might expect on such a short, scenic, and accessible path in the most visited Park in the National Park system. 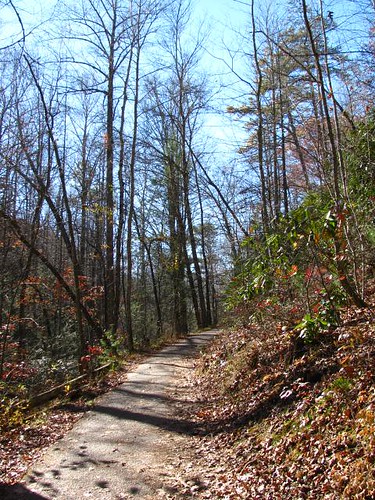 The beginning of the paved trail to the falls. 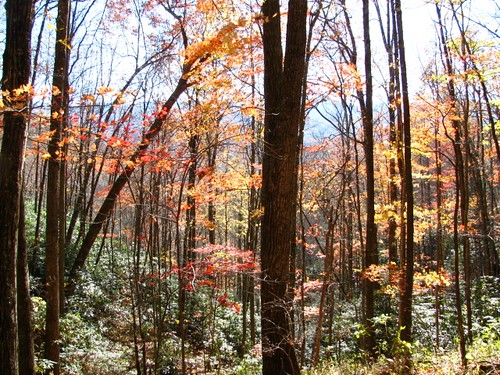 It was nice to be in the midst of the fall foliage, rather than simply driving by it. 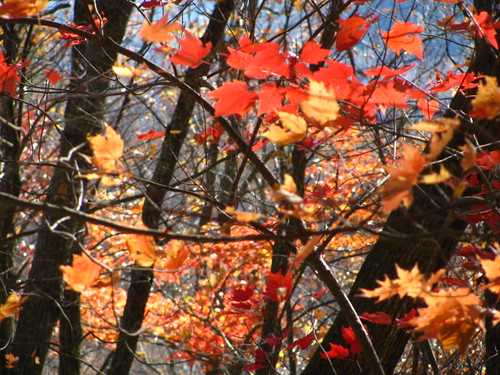 Close-up of the leaves.

If you look at the elevation profile below, that last half mile to the falls looks like more of a climb than it felt.  We did feel the climb a bit ourselves, but we had already done one hike that day, and I assure you, at a little less than three miles and only about 330 feet in elevation gain, anyone in a moderate state of fitness can manage it. 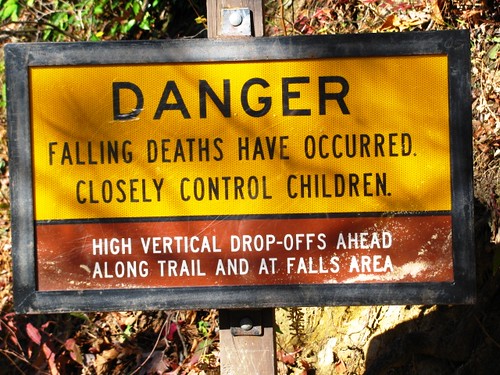 Sign near the beginning of the steeper stretch of the trail. Were we afraid? Hell no! 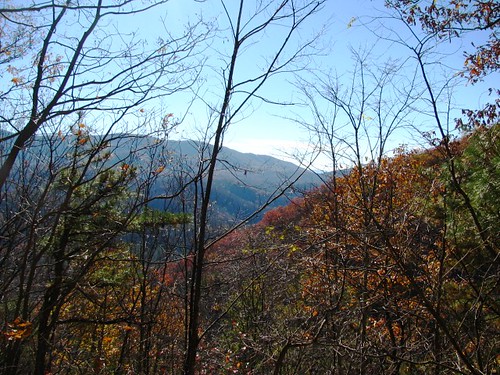 A look out onto the valley below. 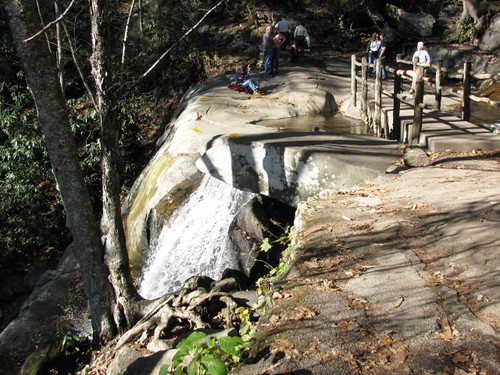 A view of the falls ahead, and the lower falls, plus the bridge across the creek. You can also see how steep the drop is off to the left of the trail.

The falls themselves were very nice, but I’m certain they are much nicer earlier in the year when the water is flowing a little higher.  For a comparison, see our pictures below versus the one from the Great Smokies website. 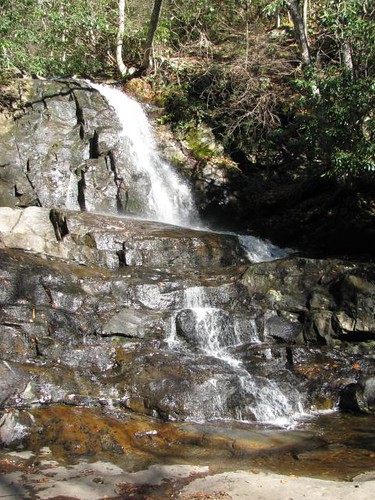 Our picture of the upper falls. 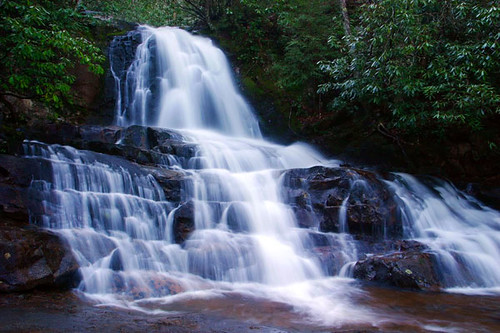 Someone else's much more impressive picture of the falls (http://www.thegreatsmokies.net/laurel-falls/). 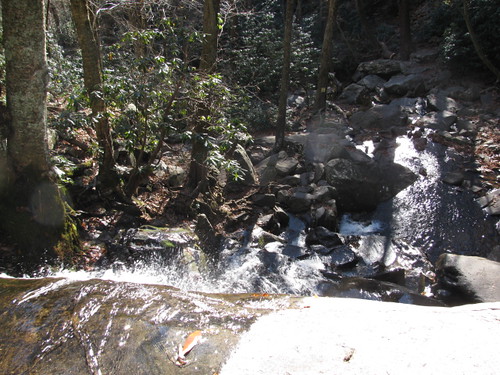 Looking down from the bridge to the lower falls. This picture really doesn't do it much justice.

The trail was short and sweet enough that even after driving up to the Appalachian Trail and taking our Laurel Falls hike, we still had time to stop by the Little Greenbrier School on the way back to the cabin and even hit the local bbq joint for some wings, fried okra, and fried green tomatoes to pick up some munchies to go with dinner! 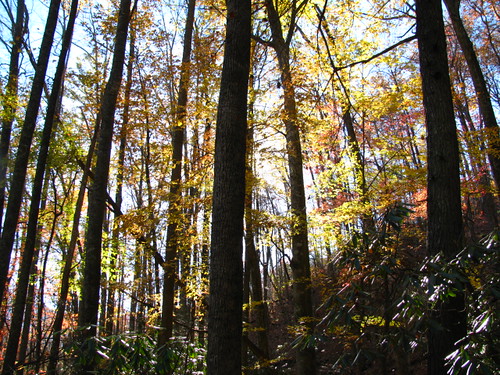 Fall foliage in the afternoon light as we headed back to the trailhead.