While Colleen and I both love the outdoors, I’m a much bigger fan of tent camping than she is.  While we have camped together a few times (including at Mount San Jacinto State Park and Anza Borrego State Park), all else being equal, she’d rather I do my camping adventures without her.  I have my annual big primitive camping trip with my buddies in the High Sierras, which is always one of my favorite times of the year, but when I get a chance to squeeze in an extra trip with friends or the kids, I jump at the chance.

Last weekend, while Colleen was out of town, my son and I had planned to take a quick ski trip into the local mountains.  But it has been so warm in Southern California this Winter (#SoCalProblems), we decided to head to the desert to go camping instead!  I wanted to find a place where my son and I could go shooting out in the desert by ourselves, rather than be restricted by range rules, and I remembered that I used to always go out near the City of Mojave in the BLM Desert Conservation Lands out past there, and I also remembered that I had driven past Red Rock Canyon State Park nearby for many years on my way up to the Mammoth Lakes area, but had never stopped. I also wanted to take the dog on her first camping trip to see how she would do, before possibly taking her on my big annual trip this summer.

Red Rock Canyon State Park stands in for “The Badlands” in Montana, in one of the opening scenes from Jurassic Park, seen in a screen capture here.

Known for its beautiful geological formations, paleontological discoveries, and for being one of the top stargazing sights in Southern California (you can even find a “clear sky” forecast chart for the park here), it has also been home to over a hundred movies, tv shows, and commercials (List of movies and tv here, narrative about filming history at the park here), including Jurassic Park, Holes, The Ten Commandments, and too many westerns to count!  In this way it is similar to the Alabama Hills outside of Lone Pine, just up the road a bit farther, Bronson Canyon (by the Hollywood sign), and Franklin Canyon (just outside of Beverly Hills).

I knew from the park website that they didn’t take camping reservations, but when I called their office, they told me I was unlikely to have problems getting a site this time of year (but they warned me that Spring could be difficult).  They did say that if the campground was full, that people regularly camped at the Dove Springs and Jawbone Off Highway Vehicle Recreation Areas immediately adjacent to the state park.

On the side of Hwy 14, inside the State Park, right before the campground entrance. 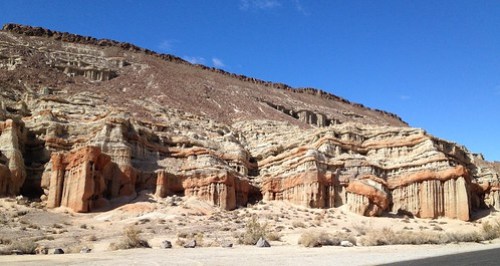 The left side of the highway, just before the campground entrance.

The park is impossible to miss if you head up the 14 Fwy from the Los Angeles Area towards Historic Highway 395 and the Lone Pine, Bishop, Mammoth Lakes Area.  It is about 12 miles north of the Hwy 58 junction, and about 20 miles south of the junction with Hwy 395.  From the Highway, you can see some pretty impressive formations, but most of the best scenery (as usual) is just off the road, and some of the best of it is right in the campground itself!

Though we arrived on Saturday around noon, we were surprised to find the campground quite empty, and were able to select nearly any site we desired.  The Visitor Center / Ranger Station was closed, but there was a fee box to deposit the $25 per day it cost to stay.  All 50 of the campsites are on the right side of the campground road, and nearly all of them are nestled right up against the breathtakingly cool multi-colored cliffs and crags, caused by years of wind and erosion on sandstone and volcanic rocks (more on the geology and amazing paleontology discoveries can be found here). 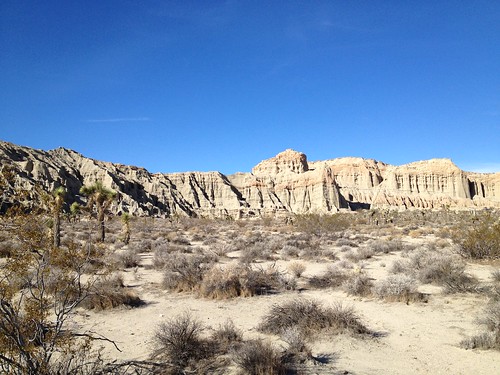 All of the campsites are up against the bluffs in this picture. 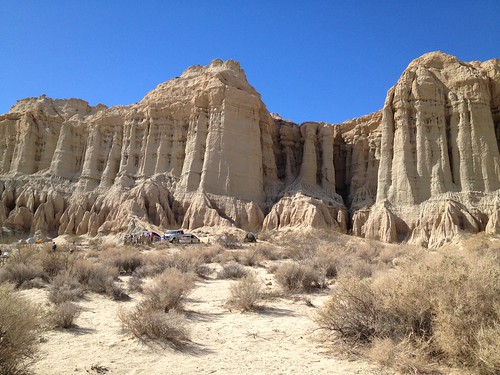 Some of the campsites, right up against the cool cliffs. 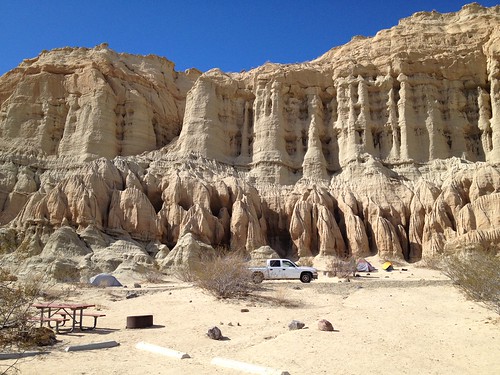 More campsites under the cliffs. 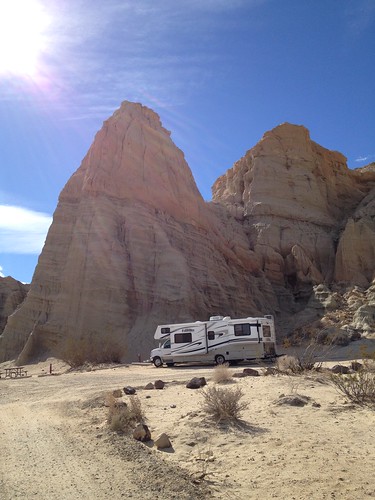 Certainly the safest way to stay here. Protection from the sun, the wind, and the cold—all of which are possible in a single day camping here in the winter! 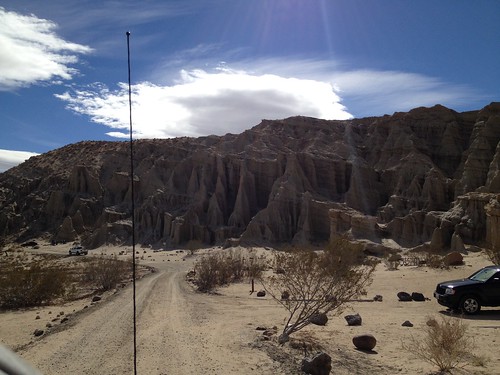 More of the campsites.

Nearly every site was spacious and deep and had awesome little nooks and crannys and caves and spires to explore.  While my son and I climbed around and explored a bit, I’d bet that he and his sister would have spent all day climbing and hiding and playing in the rocks when they were younger. 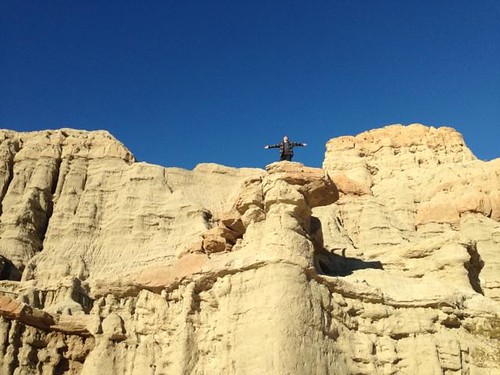 Hunter, goofing around on the rocks by our campsite. An amazing natural playground for kids and grown-ups alike! 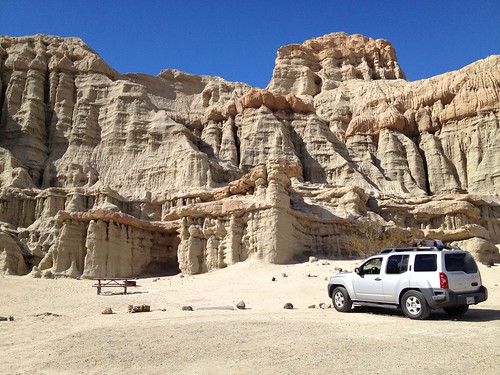 Our campsite! We put the tent up against that little cave near the middle to protect it from the wind. It mostly worked… 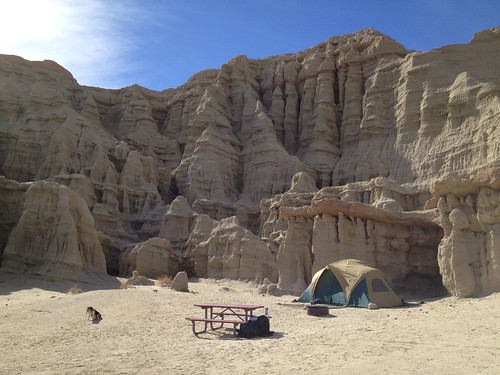 Tent up! You can see how much terrain there was behind us, though if there had been neighbors in the site next to us, it wouldn’t have been quite as spacious. Might have been worth buying both sites on a busy weekend. 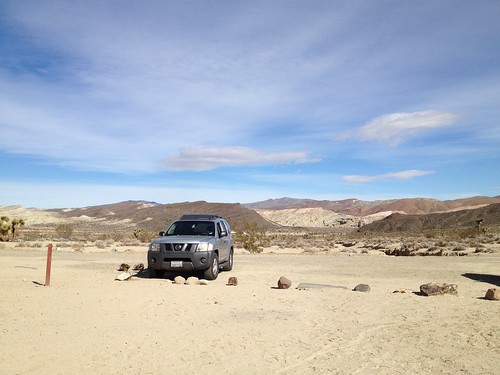 View from our picnic table towards the truck and away from the cliffs. 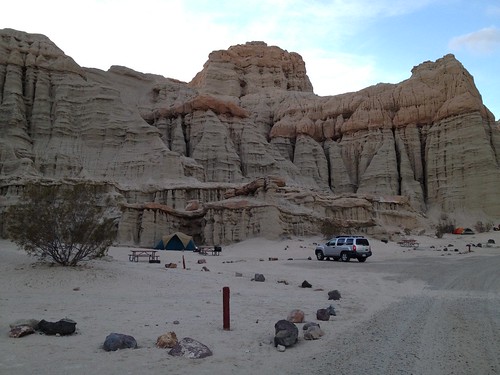 Our campsite in the evening light. The rocks looked very different as the light changed throughout both days. 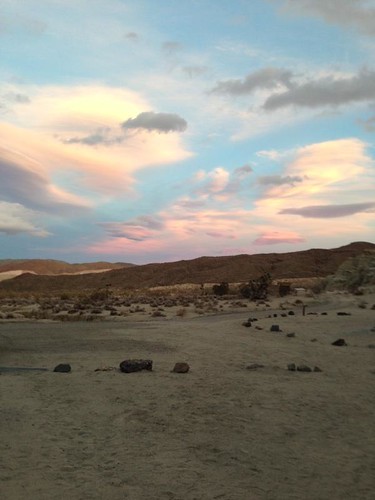 Sunset clouds from our campsite. 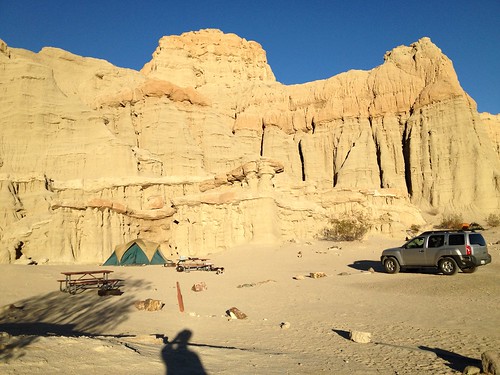 Our campsite in the morning light. The picnic table to the left is for the other empty site next to us.

We found a site to our liking, with the same picnic table and fire ring (and nothing else) that all the other sites had, and set up camp.  The weather this particular weekend was beautiful, though it did get windy and fairly cold later (which was perfect for testing the new sleeping bag I’d been sent!).  This park is in the desert, so it does get ridiculously hot in the summer, but the weather can be beautiful in the late fall, winter, and early spring.  The previous week it had been below freezing at night, and two weeks earlier, the winds had gusted up to 40 miles per hour (according to the Park’s helpful and regularly updated Facebook Page), so you do want to check your weather reports in advance before heading there. 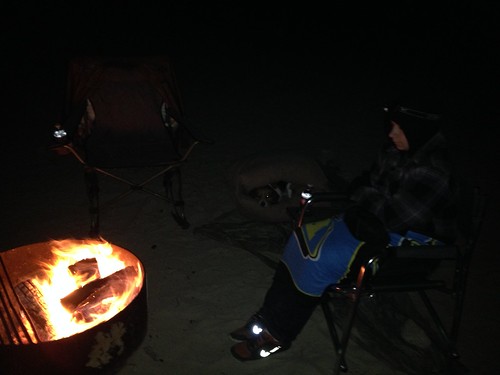 It did get a bit cold and windy at night! 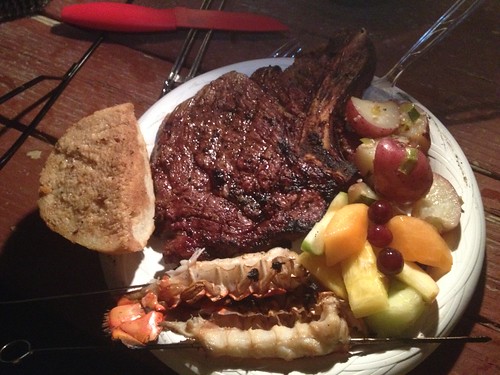 Though not so cold that we couldn’t enjoy a mesquite grilled and campfire cooked gourmet meal (I don’t like to eat primitively on my camping trips. See my post about campfire cooking on our food blog: http://www.thetasteplace.com/2010/07/25/this-aint-no-weenie-roast/)

On those rare occasions my wife will camp, she likes State Park Campgrounds, because they tend (unlike National Forest Campgrounds) to have flush toilets and relatively clean showers, but this was not the case here.  Restrooms here were all vault/pit style, with some of them being open air, and some enclosed.  As vault toilets go, they were pretty clean and didn’t particularly stink (being open air helps, I suppose!), but that factor alone would keep Colleen from camping here without an RV (an RV would also avoid the potential problems from wind, btw). 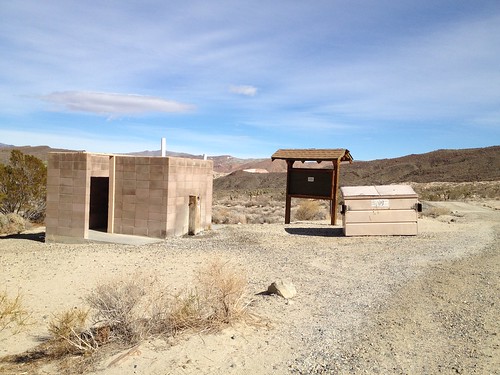 Open air vault toilets closest to our site. There was a dumpster and a faucet with potable water there as well.

You can see the open air nature of this toilet here. Though it did help keep the air fresher than the average pit toilet!

One of the more “civilized” vault toilets, with a roof and everything!

As you can see from the pictures (all taken with my phone, so they really don’t do the place justice), the rock faces surrounding the campground create a great atmosphere, and as billed, at night, the sky was amazingly clear.  We had about a half moon that night, and it was so bright, that my son and I were able to walk without even using our awesome headlamps!  Once we turned off our lantern in the campsite, we were blown away at how much of the campground we could see in the moonlight.

There are trails throughout the park (see linked campground and trail map), but since we had our dog with us, and State Parks don’t allow dogs on trails, we did all our exploring either in the campground or outside of the park itself. 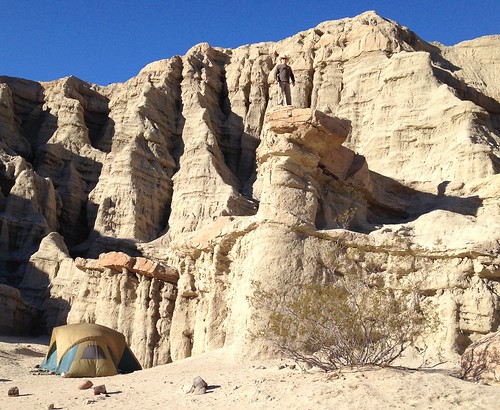 Me, goofing around on the rocks above our site.

Holly was much sadder leaving than she was coming!

Whether you are a hiker, an off-road enthusiast, a star gazer, an amateur geologist, an amateur paleontologist, a film buff, or a shooter (just not in the park, please!), Red Rock Canyon State Park has something for anyone who enjoys the desert.  At 120 miles from Los Angeles, it only took us two and a half hours to drive there from Orange County, making it an easy drive for a regular weekend or even a single night of camping.  The trails are also worth stopping even as a day trip on the way to or from Bishop, Mammoth, Mono Lake, Reno, or anywhere else up along the 395 (lots of short stops worth checking out along the 395).