Colleen and I decided that a good way to blow some summer vacation days this year was to head up to the Sierras and re-trace the route over Ebbets Pass that one of my ancestors had taken back in 1858.  One of the eastern accesses to the pass is off Historic Highway 395 between Mono Lake and the California-Nevada state line, which is a drive we both enjoy, so we were looking for a place to camp the first night between Lee Vining/Mono Lake and Topaz Lake at the Nevada border.  We were renting a 22 foot RV for the first time, so initially we were looking to stay in an RV Park with some shade, hook-ups, and wi-fi, but as I looked at options in Lee Vining, Bridgeport, Twin Lakes, and Topaz Lake, I became increasingly discouraged at how crowded they looked. or at their prohibition on campfires, the lack of trees, or their refusal to answer the phone or e-mails about their availability (I’m looking at you, Topaz Lake RV Park!). 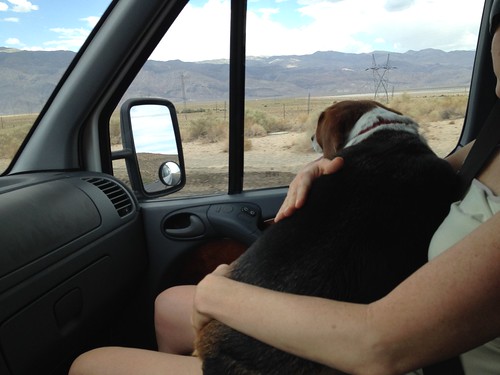 Holly enjoying the view of the White Mountains on the way up Hwy 395. 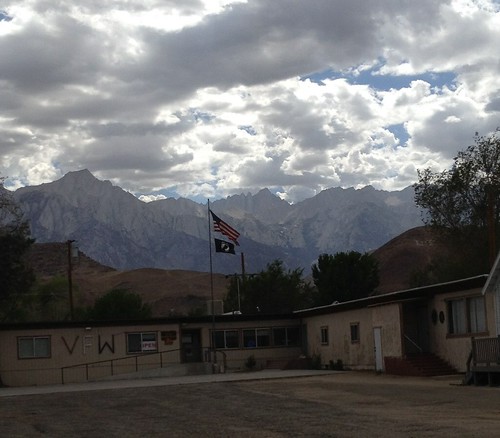 Mount Whitney, right of the flag over the Lone Pine VFW Post on Hwy 395.

Since it was clear we were going to have to make some compromises wherever we stayed that first night, I started casting my research net wider, to include some non-RV parks.  One that I stumbled across that sounded nice in the Forest Service write-up and had some positive reviews on Yelp was Buckeye Campground in the Humboldt-Toiyabe National Forest.  The pictures showed nicely shaded campsites, it was located right on a creek with a nifty looking hot spring nearby, and at over 7,000 feet elevation, was likely to be significantly cooler than the sites down along the 395.

A picture of the hot springs pools alongside the creek–we didn’t get there this time, but this photo from Sean on Flickr shows the idea.

The turnoff to Buckeye was roughly 6 hours from our home in North Orange County, and there are two ways to get there.  The recommended route is to take Twin Lakes Road 7 miles west from Bridgeport to the well maintained dirt Buckeye Road at “Doc and Al’s Resort” (which looked pretty nice, actually), which you then follow about 3 miles to the campground.  We (and by “we”, I mean “I”, I’m sure my wife would point out) chose to go on through Bridgeport and then take Day Creek Road about five miles west into the campground.  Day Creek Road was not for the faint of heart, being dirt and about one lane wide in several sections, with several rough spots, and not having seen a single other vehicle for the entire five miles.  Our camp host expressed disbelief that we’d come in that way, saying he’d only taken it once–in his Jeep–and would never take it again.  Well, I took it in our rental RV, and thought it was awesome, but I happen to love roads like that.   If you don’t, I’d highly suggest you come in off Twin Lakes Road. 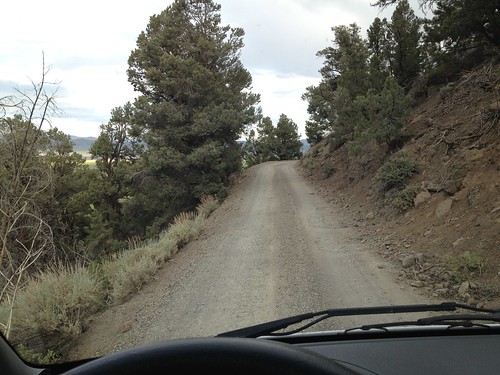 Heading up Day Creek Road in the RV. Not a lot of room for oncoming vehicles to squeeze by! 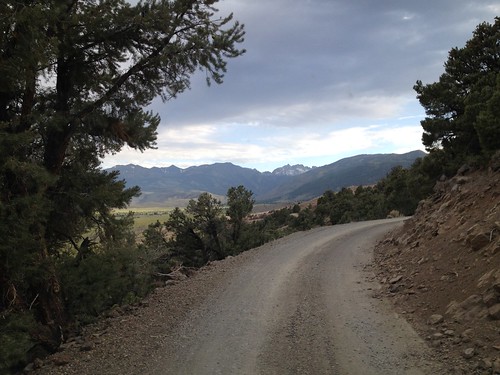 Beautiful road, but a tight squeeze! 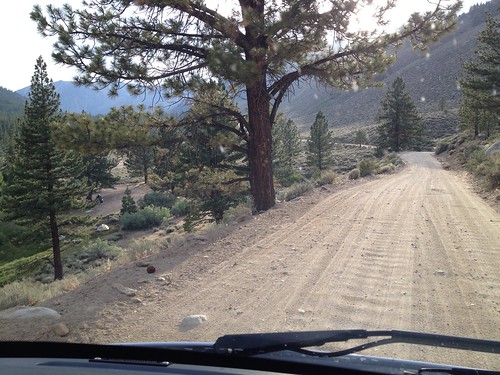 Off to the left you can see the parking area for the hot springs just before the junction for the campground. 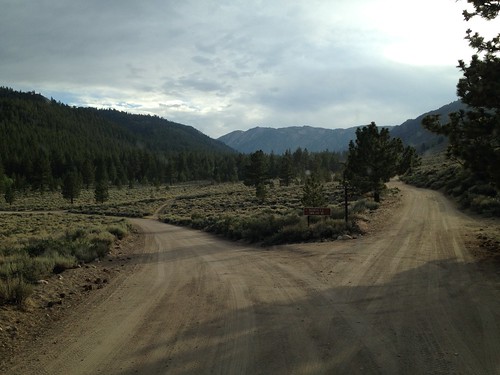 Going straight gets you to the campground. Heading left takes you to the hot springs and towards Twin Lakes.

Just before we hit the turnoff for the campground, at Buckeye Road, we saw the parking area for Buckeye Hot Springs on the south side of the road, but we were running later than anticipated, so went straight to the campground.  The campground is right on the scenic Buckeye Creek, which even in this dry year was running strongly, and looked like it would be great for fishing or hiking along. 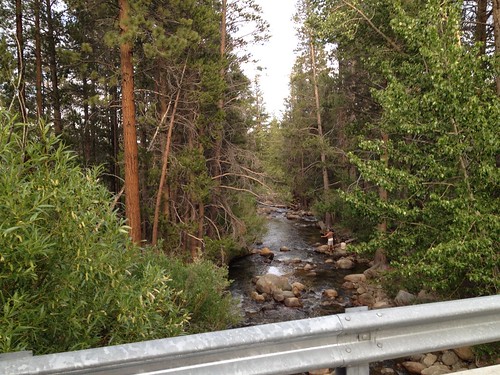 Looking left down Buckeye Creek from the bridge by the campground. 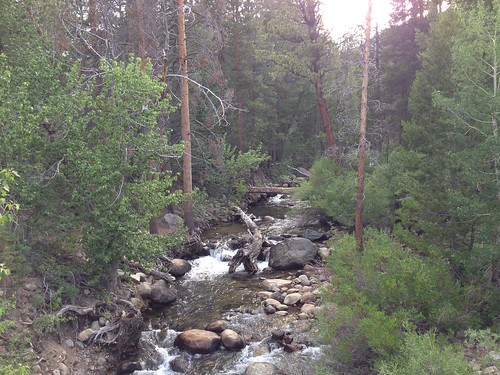 Looking right up the creek from the bridge into the campground.

Buckeye Campground does not take reservations, but I’d been more or less reassured by the Forest Service office when I called in advance that I wouldn’t likely have any trouble getting a spot on a Sunday night.  I’d recently stayed at Red Rock Canyon State Park without reservations and had no problems, so I wasn’t worried (though my next camping trip after this one was a bit of a fiasco when there were no openings at the “first come” campgrounds in Kern River), and sure enough, the campground was nearly empty.  When the camp host came by, he said that it had been more full than he’d ever seen that previous weekend (4th of July), but that it was usually not too hard to find a good campsite at Buckeye. 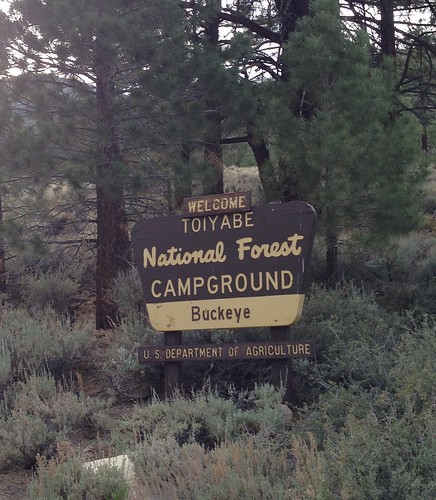 We picked a campsite (#11) on a hill directly above the creek, with a little trail leading straight down to the water.  Every site we saw was nicely shaded, and quite a few of them were right adjacent to the creek itself (though most were occupied).  Initially there was no host to be found, but the informational kiosks (several were spread through the campground) said to just fill out an envelope and deposit the money yourself once you’d picked your site.  Immediately adjacent to the kiosks were a vault toilet (as clean as a vault toilet ever is), a dumpster, and a water faucet that according to the website is non-potable, but it didn’t say so on the faucet itself. 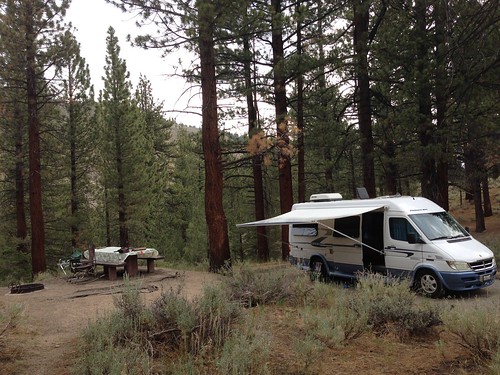 Our cool, compact, rental RV in the campsite. 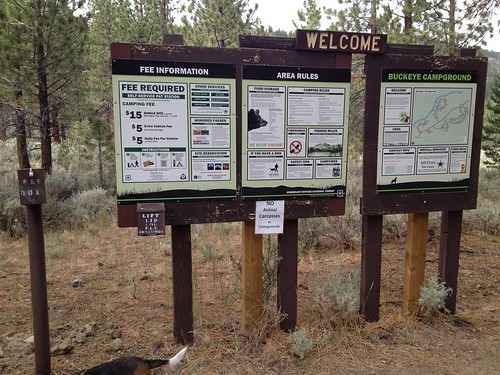 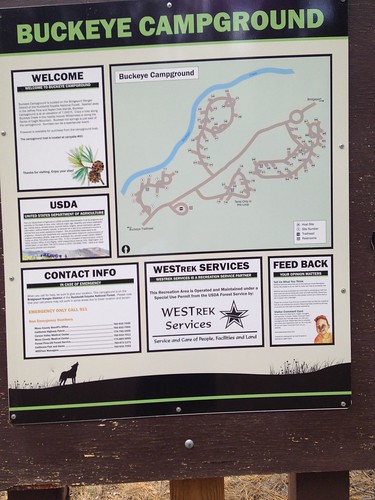 Close-up of the campground map. If you click through, you can zoom in on campsite numbers.

Vault toilets. Clean enough, but since the whole reason we rented the RV was to have our own clean toilet, we never actually used it.

Each space had a picnic table and a fire ring, and our spot was quite spacious and private feeling–and felt like it would have been even if there had been more people in the campground.  I do have to say, that while it felt spacious, there was not a ton of flat open space in our campsite, and my ginormous 12X18 four room tent might have had difficulty fitting in this particular space, but other sites had a lot more flat space than this one did. 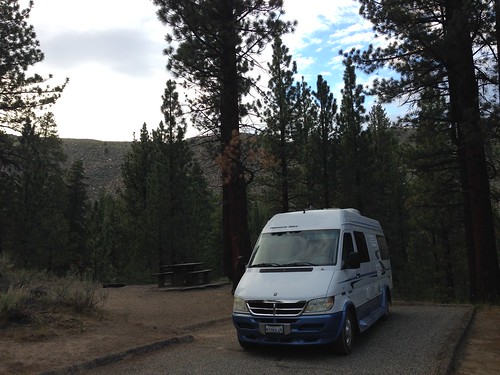 Another shot of the campsite. 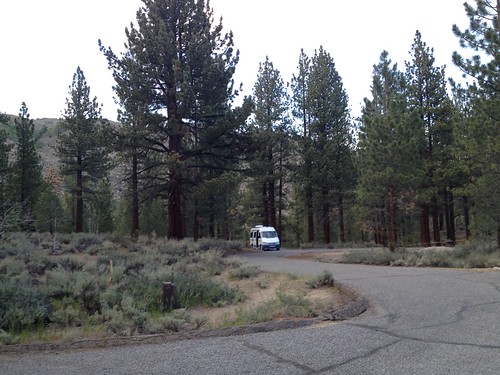 How spacious? Believe it or not, in this shot, only one other site is even visible, and it was empty, too (closed actually–you can see the yellow caution tape).

Since we were already starting to lose daylight by the time we got in, we almost immediately took a walk down to the creek, where we were treated to three deer munching on leaves right across the creek from us (photos below kinda suck, but were the best we could do in the light with our iPhone cameras). The creek was great, and looked like the kind of place we would have liked to hike up and down and around or just simply sit next to with a chair and a book (and a dog, of course…). 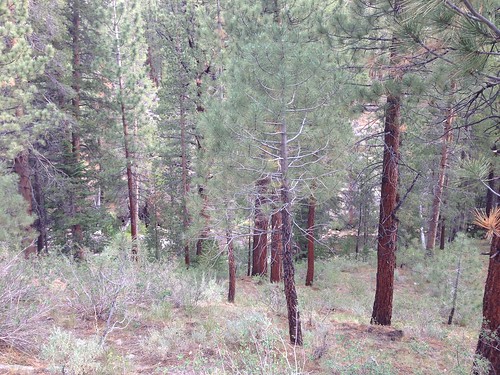 Looking down from our picnic table to the creek below. 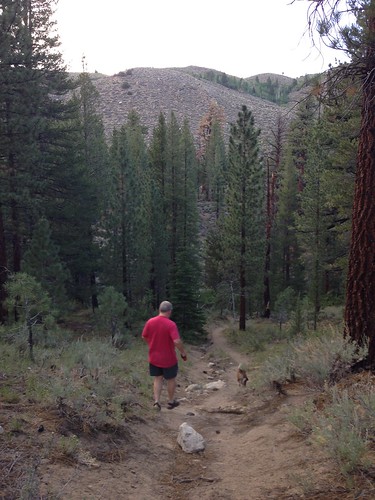 Heading down the trail to the creek from the campsite. 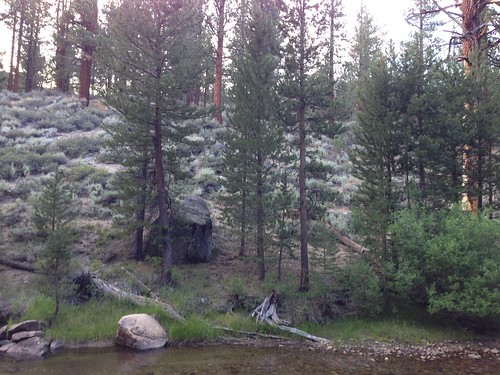 This was the best picture we got of the deer in the failing light with our iPhones, but if you look hard you can definitely see two of the three dear hiding in there. 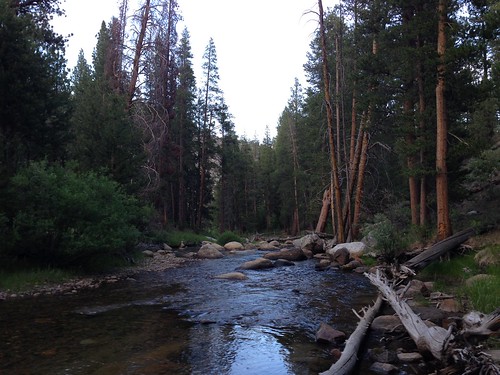 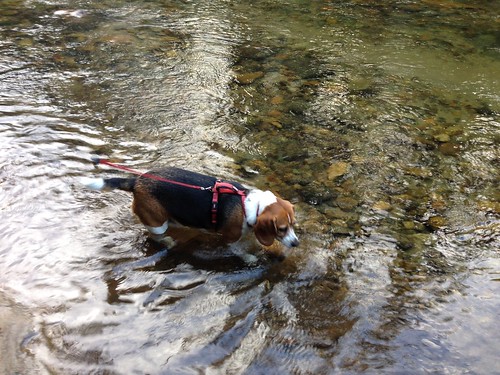 After a long day of riding in the RV, Holly enjoyed the creek as well!

Though it had been 100 degrees in OC and through virtually the entire drive up the 395 on this July day, the temperature was perfect at 7,000 feet, so we didn’t need to use our A/C in the RV as we slept, which was good, since there definitely weren’t any hook-ups to be found.  Or wi-fi.  Or even a phone data signal!  But as we sat around the fire that night, enjoying the sound of the creek below, we already began to wish that we’d planned to spend more than one night on site, as the whole area looked like it would be great for hiking, and we knew we weren’t likely to have time to visit the hot springs in the morning before we had to set out for Ebbet’s Pass. 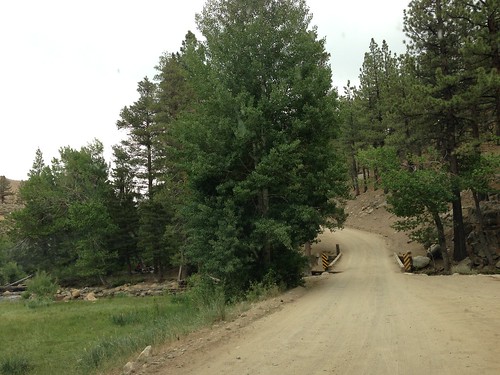 The bridge over Eagle Creek as we leave the campground headed for the Twin Lakes area–had we come in the “right way”, we would have crossed this right before hitting the campground. 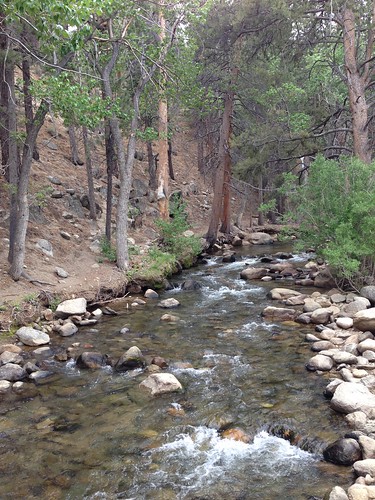 A look up Eagle Creek. 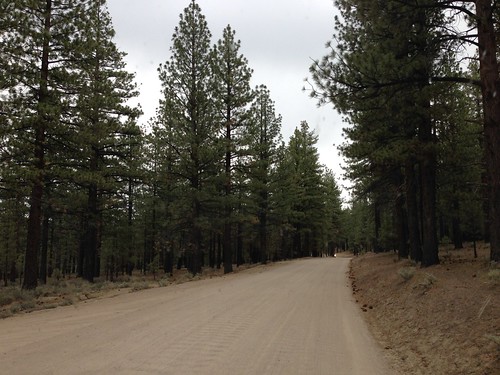 Buckeye Road to Twin Lakes is MUCH wider and better maintained than Day Creek Road.

Panoramic shot of the Bridgeport Valley below the Sierras. 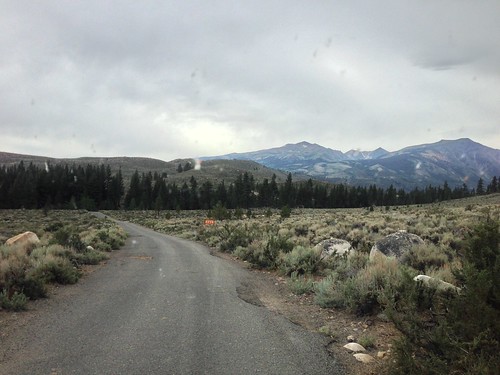 Paved final stretch of Buckeye Road before hitting Doc and Al’s (in the trees ahead) and Twin Lakes Road. 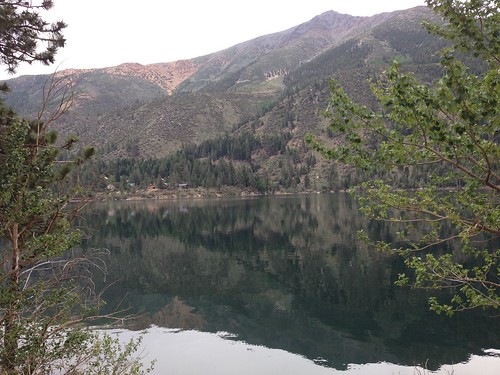 A shot of the lower of the Twin Lakes. 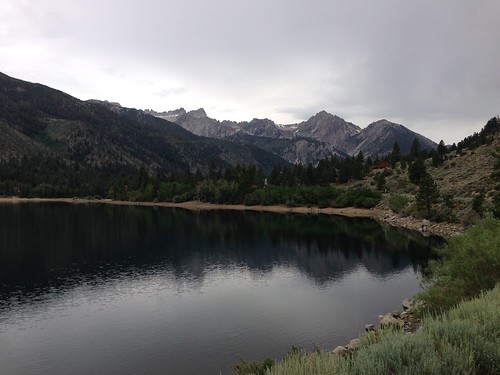 On the way out the next day, we went by Doc and Al’s resort, and also drove all the way up to the Twin Lakes area, a pretty little community with a few more “resorts”, where you could stay and rent boats or kayaks or bikes.  There are several other campgrounds in between Buckeye Campground and Twin Lakes, so if for some unlikely reason you got shut out of places to stay at Buckeye, you could almost certainly find a place elsewhere–though you should always check in with a Forest Service office first to make sure what is open. It was all a very, very nice area, and if you were looking for somewhere less crowded than Mammoth in the Eastern Sierras, I would highly recommend it.